Please give a warm Coffee Pot welcome to Historical Fiction author, Judith Arnopp. Today, Judith is going to share with us her inspirations behind her latest series… 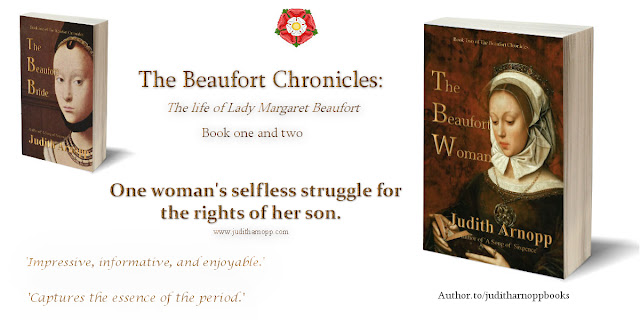 The Beaufort Bride - As King Henry VI slips into insanity and the realm of England teeters on the brink of civil war, a child is married to the mad king’s brother. Edmund Tudor, Earl of Richmond, takes his child bride into Wales where she discovers a land of strife and strangers.

At Caldicot Castle and Lamphey Palace, Margaret Beaufort must put aside childhood to acquire the dignity of a Countess and despite her tender years produce Richmond with a son and heir.

While Edmund battles to restore the king’s peace, Margaret quietly supports his quest; but it is a quest fraught with danger.

As the friction between York and Lancaster intensifies Margaret, now fourteen,  is widowed and turns for protection to her brother-in-law, Jasper Tudor. Two months later at Jasper’s stronghold in Pembroke, Margaret gives birth to a son whom she names Henry, after her cousin the king.
Margaret’s story continues in The Beaufort Woman

As the struggle between York and Lancaster continues Margaret, now married to Henry Stafford, fights for admittance to the court of the victorious Edward IV of York and his unpopular queen, Elizabeth Woodville.

The old Lancastrian king and his heir are dead, leaving only Margaret’s son, the exiled Henry Tudor, with a tenuous claim to the throne. York’s hold on England is strong and his royal nursery replete, with two small princes securing their line. But Edward and Elizabeth’s magnificent court hides a dark secret, a deception that threatens the security of the English throne … and all who lust after it.

In 1483, with the untimely death of the King, Margaret finds herself at the heart of chain of events that threaten the supremacy of York, and will change England forever. 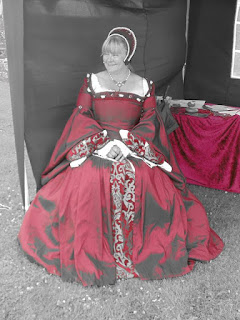 I can scarcely believe I am on my ninth historical fiction book now.  My first, Peaceweaver, was published in 2009 and many things about my writing have altered since then. My inspiration however has remained the same.

I’ve read historical fiction all my life and when I began to think about a writing career I didn’t consider any other genre. I have always been fascinated not only with the fashions and social considerations of the past but with the people, particularly the women. Females had it tough – well, everybody had it tough but men were at least allowed their place in history. The motivations, concerns and actions of women, not highly regarded by the male chroniclers, were largely underrepresented. I like to provide these women, silenced by history, with a voice. I write from a female point of view, using fiction to fill the void but I never forget it is fiction, even if it is heavily based on research.

The wives of Henry VIII are often dismissed as ‘boring’ but that is so far from the truth. Each one of Henry’s queens is fascinating, and there is something to admire in all of them. Catherine of Aragon refused to bow to Henry’s desire for a divorce was exiled from court, living in relative penury for the sake of her daughter’s position. Anne Boleyn, dismissed by history as a scheming home wrecker was a strong woman who did much for the new religion and possessed a fierce and challenging intelligence. Henry’s third wife, Jane Seymour, was queen for such a short time that there is little in the record to reveal her real character or motivation. Some historians dismiss her as the tool of ambitious brothers, while some claim she actively sought Henry’s favour with an eye to the main prize. Whichever way you view her, ultimately she sacrificed her life to provide Henry with his deepest desire – a son and heir to secure the Tudor line.

Anne of Cleves, faced with the shame of rejection by the fastidious king ultimately emerged best of all. Henry endowed her with fine residences and she lived a full life, often at court as a good friend of the king. Katherine Howard made mistakes yet, despite her tender years, found the capacity to die bravely on the scaffold. And Katheryn Parr, the last queen, played her role of queen faultlessly, escaping the executioner’s blade by a whisker, only to die tragically shortly after giving birth to Seymour’s daughter.

These inspirational women who had the misfortune to attract the attention of Henry VIII and became entangled in his struggle to secure the Tudor line, are the women who inhabit most of my books.

Set at the time of Anne of Cleves and Katherine Howard the narrative of The Winchester Goose passes back and forth between the royal court to the stews of Southwark where prostitute, Joanie Toogood, makes cynical and comical observations on the lives of her betters.

The Kiss of the Concubine is the story of Anne Boleyn – another woman who has been tainted both historically and in fiction. My main inspiration was to allow Anne to tell her side of the story without resorting to the use of witchcraft or to sleeping with her brother! Anne reveals a Henry who is a complex, insecure and often confused man – disappointed in himself and striking out at those who love him best.

Elizabeth of York has, until recently, been neglected in fiction. In A Song of Sixpence I consider the conflicts she, being of York’s line, may have faced as a Tudor queen. I also introduce the mysterious figure of Perkin Warbeck, a challenger to Henry VII’s throne. If Perkin was indeed one of the lost princes, how did Elizabeth overcome the dilemma of choosing between the life of her brother or her son’s future as king of England.
These days, women are seldom required to make politic marriages but we are often forced to do things we’d rather not. When Katheryn Parr agreed to wed Henry VIII she sacrificed her own romantic inclination to marry Thomas Seymour but she didn’t go into marriage with the king half-heartedly. She set aside her own plans and fully embraced her role as queen, championing the new learning, standing as regent while Henry fought in France and, unlike her predecessor, behaving in a thoroughly regal and admirable manner. She was also the first English queen to become a published author! Katheryn Parr was perhaps the most surprising of Henry’s queens.
All the women I feature are intelligent, resourceful and brave but also flawed, just as we all are. My biggest challenge yet has been Margaret Beaufort. Margaret has been very poorly represented in fiction and the reason for this is quite clear. She was not a pretty woman, but she was pious, resilient and very, very determined. It is not easy to turn a strong, plain woman into a romantic heroine and so, in fiction at least, she has become a harridan, a half-mad zealot. Feminists today rejoice in the few medieval women who stepped from beneath the thumb of masculine authority but Margaret is seldom among them. I wanted to change that because I think a celebration of strong medieval women would be lacking without Margaret; in fact, she should be leading the parade!
Margaret emerges as somebody who is imperfect but who seeks perfection, someone whose intentions are honourable but often conflicted. In the beginning, sent as young girl to be the wife of a stranger twice her age, Margaret can have had no concept that she would end her life as the most powerful woman in England.
I embraced her journey from girl to woman in The Beaufort Bride and The Beaufort Woman, allowing her to explain her motivation, and describe how she found the strength to fight her cause with very few weapons. I hope that in providing reasons for her actions, and colouring her relationships with emotion, I’ve managed to evoke a little empathy for her too.
Currently, I am working on The King’s Mother – the third and final book in the series. Having achieved a status beyond her wildest ambition, Margaret must now try to maintain it amid the rebellion and unrest that undermines her son’s early reign.
Margaret is a difficult character to write – sometimes when I try to nudge her along a particular line of narrative she digs in her heels and refuses to move! I have to rethink it and try to negotiate a path that suits us both. When it gets tough I remind myself that the greater the challenge, the greater the reward.
So, I appear to have been rambling, I do apologise. The short answer to your question, ‘what is my author inspiration?’ is ‘to give a voice to women in history who have been silenced in the historical record for too long.’
Thank you for listening.


About the author
When Judith Arnopp began to write professionally there was no question as to which genre to choose. A lifelong history enthusiast and avid reader, Judith holds an honours degree in English and Creative writing, and a Masters in Medieval Studies, both from the University of Wales, Lampeter. Judith writes both fiction and non-fiction, working full-time from her home overlooking Cardigan Bay in Wales where she crafts novels based in the Medieval and Tudor period. Her main focus is on the perspective of historical women from all roles of life, prostitutes to queens.
Her novels include: The Beaufort Bride, The Beaufort Woman (Book One and Two of The Beaufort Chronicles); A Song of Sixpence; Intractable Heart; The Kiss of the Concubine; The Winchester Goose; The Song of Heledd; The Forest Dwellers, and Peaceweaver.
She is currently working on Book Three of The Beaufort Chronicles: The King’s Mother.
Her non-fiction articles feature in various historical anthologies and magazines.
Useful Links
Webpage