It is with the greatest of pleasure that I welcome Young Adult Fantasy author, Amy Bearce, onto the blog today. Amy’s ‘World of Aluvia’ is a must read series and one that I have given 5* reviews to.  Amy is going to share with us her inspiration behind her fabulous series. I can’t wait…! 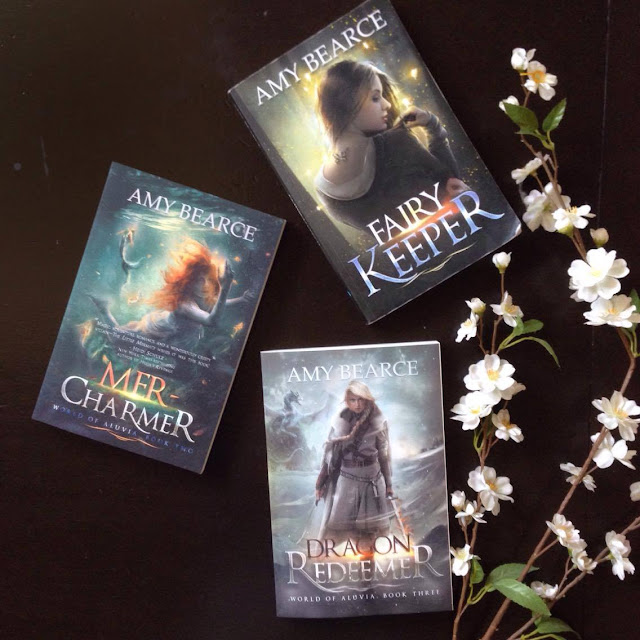 The World of Aluvia series is a trilogy best suited for ages 11-14 and up.

The world of Aluvia is a place of magic, but it’s a broken, dark world where magical creatures are suffering, and the land itself begins to shake apart. When the fairy queens disappear and their little fairies die, it marks the beginning of a long journey for three girls who seek to heal their world.

Sierra hates her calling as a fairy keeper, but is compelled to travel to the dangerous wilderness to find the lost queens. (Book One, Fairy Keeper)
Phoebe must help the gentle merfolk reclaim their magic once more—by first discovering her own. (Book Two, Mer-Charmer)
And Nell must hold the line when a new enemy arrives who wants to return Aluvia to the days when humans held all the power, risking the very magic they’ve worked so hard to restore. (Book Three, Dragon Redeemer) 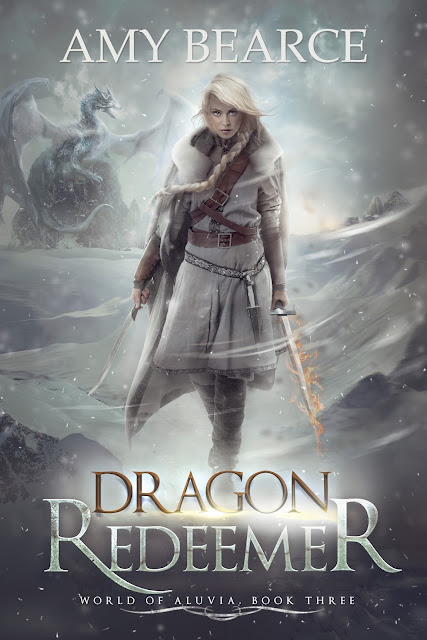 Four years have passed since a fairy swarm released the voice of prophecy in Nell Brennan. In that painful moment, a skilled warrior became a reluctant leader and defender of Aluvia’s magic. Now a new enemy threatens their still-fragile lands, one Nell feels powerless to stop even with help from the voice within her.

A mysterious dark alchemist from the Ice-Locked Lands is rising to power on the strength of his sword arm and an ice-breathing dragon obedient to his command. He promises unlimited magic to his followers and death to those who defy him. If he takes over the ports, his corrupt elixirs will disrupt the delicate balance of peace between Aluvia's people and all magical creatures.

The voice of prophecy sends Nell and her friends to their enemy’s treacherous domain to find a sword of legend. Only the sword’s magic can prevent a return to a world of dying fairies and caged merfolk. But Nell’s up against the toughest foe she’s ever faced. In order to defeat him, she must master the unimaginable power of the sword―and the unwanted magic inside herself.

Unlike some of my ideas, I can trace the origin of Fairy Keeper, which is the first book in my series. I had been reading about Colony Collapse Disorder (CCD).  For those unfamiliar with that term, CCD is when all the worker bees of a hive swarm off and disappear for no known reason, leaving the queen and her brood (the young) behind to eventually die.  Entire bee colonies were vanishing, and scientists and farmers were struggling to determine the reason.

I found this alarming, but also fascinating.  One of my favorite questions as a writer is “What if?” So I asked the question, “What if, instead of bees, little insect-like fairies were going missing and dying? And like with bees, what if these little fairies would have a huge impact on their world if they disappeared forever?” It occurred to me that the people in that world might not even know how valuable fairies were—until they were gone.

My entire series began with a single scene that popped in my head, in which a girl named Sierra approaches her fairies to collect their magical nectar. She senses something is wrong when she doesn’t hear their usual thrumming sound.  When she races to the meadow where they live, she sees the little ones dead on the ground and her fairy queen missing.  Though Sierra is immediately shocked at the devastation, she doesn’t know yet just how bad this is for their world.

This scene played like a movie in my mind, and the rest of the story developed from there. I actually didn’t set out to create a story about the importance of conserving our natural resources, though this theme definitely shines through. J I just wanted to tell a story about a strong girl in a difficult set of circumstances, and her determination to change the situation she faces.
The other books came from this initial premise of healing a broken world.  While I had not originally intended to write a trilogy, I wanted to tell Phoebe’s story with Tristan and the merfolk, which is hinted at in book 1. Additionally, there were some things that happen to a character named Nell in book 1 that readers wanted to know more about.  Though she began as an antagonist, she turned out to be a favorite character among many of my readers as she developed. So I asked myself... four years later, what would be happening among the population of Aluvia? What would Nell be facing in her position? If people have been sacrificing easy access to magic for a while, in an effort to protect magical creatures, might they forget just how bad life had gotten four years ago? Would they begin to resent the new rules? Humans have short memories sometimes, it seems to me. The storylines for Mer-Charmer and Dragon Redeemer were born shortly before Fairy Keeper came out in 2015.

Fairies and merfolk were clearly set in the first two books by the problem of book 1 and the supporting characters introduced.  But for book 3, I toyed with a number of magical creatures to highlight. I chose dragons for book 3 because Nell is a fierce warrior, and I wanted an equivalently strong magical creature for her.  And I have always wanted to write about dragons! I’ve loved fantasy all my life, so it’s really not surprising that my stories always end up with magic in them somehow.

Generally speaking, my inspiration often comes from real life, be it a scientific discovery or an actual place I’ve visited. We’ve done a lot of travel over the last few years because we were living overseas, and two manuscripts that I’m currently working on came from our travels.  One is set in contemporary Paris and one is in Rome, both with elements of magic. I read a lot of articles, watch documentaries, and listen to Ted Talks and educational podcasts. I often find that an interesting idea or event combined with a “What if” twist makes for a fun story premise.

That’s certainly how the World of Aluvia series came to be. 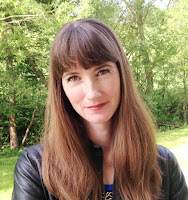 ​Amy writes fantasy for tweens and teens. She is a former reading and English teacher with a Masters in Library Science.  Prior to writing novels, she spent ten years writing short stories, articles, and poetry for state standardized reading tests on a freelance basis.

As an Army kid, she moved eight times before she was eighteen, so she feels especially fortunate to be married to her high school sweetheart. Together they’re raising two daughters in Texas. A perfect day for Amy involves rain pattering on the windows, popcorn, and every member of her family curled up in one cozy room reading a good book.