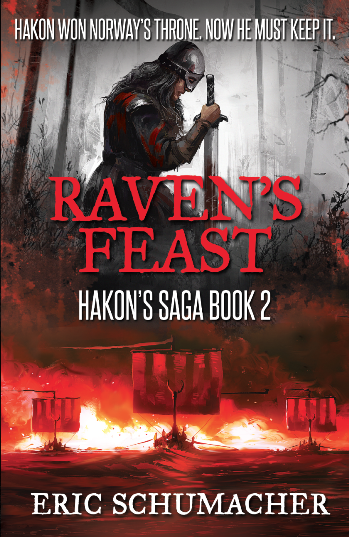 Raven’s Feast is the sequel to God’s Hammer, the true story of Hakon Haraldsson and his quest to win and keep the High Seat of Viking Age Norway.

It is 935 A.D. and Hakon Haraldsson has just wrested the High Seat of the North from his ruthless brother, Erik Bloodaxe. Now, he must fight to keep it.

The land-hungry Danes are pressing from the south to test Hakon before he can solidify his rule. In the east, the Uplanders are making their own plans to seize the throne. It does not help that Hakon is committed to his dream of Christianizing his people – a dream his countrymen do not share and will fight to resist.

As his enemies move in and his realm begins to crumble, Hakon and his band of oath-sworn warriors must make a stand in Raven’s Feast, the riveting sequel to God’s Hammer.

“At its core, Raven’s Feast is more than a story about a young king holding firm to the power he has won in Viking Norway,” said Eric Schumacher, author of Raven’s Feast. “It is the story of a young man holding true to one’s self and convictions in the face of extreme challenges — something to which, I hope, many people can relate.”

“Eric Schumacher has created the most evocative tale in his stunning novel — God’s Hammer. This book completely drew me in. The research that has gone into God’s Hammer has to be commended, and it is incredibly rich in historical detail. It was as if I was looking through a window into the past as I read the pages of this remarkable story. Hakon’s portrayal is both realistic and believable. Schumacher has obviously researched the life of Hakon in great detail, and this certainly came through in the writing. Schumacher brought Hakon back to life. Well Done!”

Mary Yarde, the author of The Du Lac Chronicles

Mercedes Rochelle, author of Godwine Kingmaker and The Sons of Godwine

After the battle, the war begins...

Despite the odds, Hakon Haraldsson won the High Seat of the North from his brother, Erik Bloodaxe. But one battle does not make a king. Hakon now has to bring the divided Jarls together under his leadership if he has any hope of retaining his right to the throne. At the same time he has to ensure the safety of his people, a task easier said than done.

Eric Schumacher has done it again. He has given us a story that practically screams realism. Raven's Feast is so rich in historical detail that it is like a personal portal to the past. The world Mr Schumacher has created is both vivid and believable. It really felt as if I had travelled to the 10th Century while I turned the pages of this remarkable book.

I loved the characterisation on Hakon Haraldsson in God's Hammer, and it was wonderful to watch his character develop further in Raven's Feast. Despite some rather disastrous mistakes, he has all the makings of a great King.

The story is incredibly fast paced. The pages simply flew by as I became more immersed in the story. This is a sit-down and finish book.

If you love Vikings, then this series should be on your to read list.

During the Blog Tour we will be giving away a signed paperback copy of Raven’s Feast!

Giveaway Rules
*Giveaway ends at 11:59pm EST on September 25th. You must be 18 or older to enter.
*Giveaway is open INTERNATIONALLY.
*Only one entry per household.
*All giveaway entrants agree to be honest and not cheat the systems; any suspect of fraud is decided upon by blog/site owner and the sponsor, and entrants may be disqualified at our discretion.
*Winner has 48 hours to claim prize or new winner is chosen. 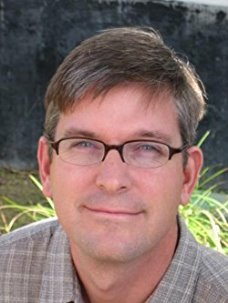 Eric Schumacher was born in Los Angeles in 1968 and currently resides in Santa Barbara, CA with his wife, two children and dog. He is the author of two historical fiction novels, God’s Hammer and its sequel, Raven’s Feast. Both tell the story of the first Christian king of Viking Norway, Hakon Haraldsson, and his struggles to gain and hold the High Seat of his realm.
Useful Links
website
Twitter
Facebook
Goodreads