Please give a warm Coffee Pot welcome to Historical Fiction author, Cryssa Bazos. Cryssa is going to share with us her inspiration behind her fabulous debut novel… 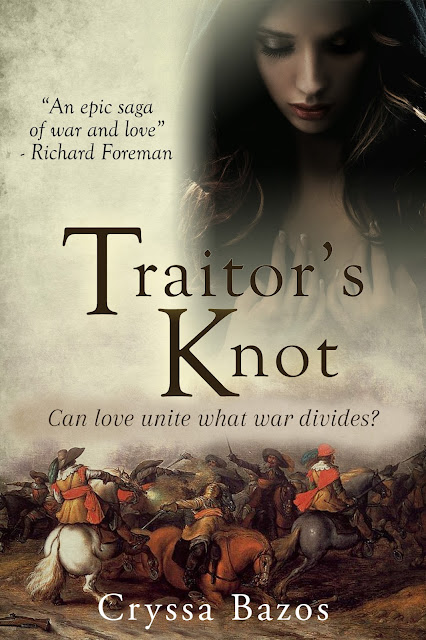 "A hugely satisfying read that will appeal to historical fiction fans who demand authenticity, and who enjoy a combination of suspense, action, and a very believable love story. Five stars." –  Elizabeth St. John, bestselling author of The Lady of the Tower

“Cryssa Bazos is equally at home writing battle scenes as writing romance, and the pace keeps the reader turning the pages.” – Deborah Swift, bestselling author of The Gilded Lily.

Traitor’s Knot can be viewed as two intertwined storylines woven into one romantic tale. The first is the struggle to help Charles Stuart (later Charles II) recover his father’s throne during the latter part of the English Civil War. Playing against this backdrop is the conflict between love and duty, and the sacrifice of those who are left behind during war.

It’s hard not to be inspired by the history. Here you have a society in flux—everything that people once held as unshakable was ripped apart. Family units had been destroyed, and communities were broken apart. Rather than trying to heal the old differences, the new regime (led by Oliver Cromwell) was intent upon breaking the old icons and remaking England into a godly new society. Soldiers returning from war had crippling fines levied against their estates and many turned to highway robbery to survive.

My heroine, Elizabeth Seton, is a young woman who would like nothing better than to leave the war behind and start a new life, but the conflict is far from over. Royalists are trying to escape persecution from Parliament, and at great risk to herself, she starts to shelter these recusants.

The original inspiration for this storyline came to me as I thought about the civilians who were affected indirectly by war. I kept thinking of the women from the English Civil War down through the ages to the more recent WWII, who were left behind while their menfolk marched off to war, and who it fell to them to find a way to keep their families together.

I grew up hearing stories of my maternal grandmother during WWII and the occupation of Greece. Widowed with three children, she had to provide for her family without the protection of a husband. She had to use her wits to keep even the roof over her head. And when an orphaned Jewish boy needed her help, she did what she could to protect and hide him, despite the risk to herself and her children.

While the two wars are separated by nearly three hundred years and arose from very different pressures, they do have in common is how they tested the mettle of those people who were left behind in the occupied areas. They faced starvation and harassment from the enemy. It would have been easier to turn a blind eye to those who were more vulnerable, but the truly courageous did not. In times of inhuman persecution, brave souls have taken a stand for humanity. It is this spirit I had in mind for Elizabeth.

This theme of sacrifice and protecting others in need links the two storylines together in Traitor’s Knot through the dramatization of the king’s escape after his crushing defeat at Worcester. My hero, James Hart, fights his way clear of the carnage and finds himself in the company of a fugitive King Charles. At the time, there were rumours circulating that the king had received help to escape from a highwayman, who knew all the hidden roads.

I found this part of the history inspiring, given that the king survived only through the help of servants and commoners. Parliament had placed a bounty of one thousand pounds for his capture, a fortune for most people. The first house Charles sought asylum in (White Ladies), the family were not in residence and had left their servants, the Penderells to mind the estate. A thousand pounds would have represented a lifetime of earnings, but instead, the Penderells took Charles in, sheltered him from dragoons and saw him to the next safe house. Had they been caught, they wouldn’t have had the luxury of going into exile like many of the nobles. These people would have paid with their lives.

Finally, turning to the romantic aspect, the clandestine affair between Elizabeth and James intertwines through both storylines. With Elizabeth looking toward the future and James mired in the past, the opportunity for happiness is fleeting. James has turned to highway robbery as a form of resistance and a way to raise funds for the king.

I have to admit to being hooked on the romantic notion of a highwayman ever since first reading Alfred Noyes poem, The Highwayman. Loreena McKennitt has made a song out of it and it’s brilliantly evocative and romantic. But highwaymen, lets face it, are amoral thieves and murderers, hardly the stuff of heroes. I was more intrigued by the concept of a highwayman who robbed, not for personal gain, but out of loyalty to a higher purpose. In a similar vein as the poem, Traitor’s Knot continues the theme of sacrifice through the lengths that Elizabeth and James are willing to go for each other.

If you enjoy rich historical detail combined with a romantic love story set during a turbulent era, then I hope you’ll consider Traitor’s Knot for your next read. 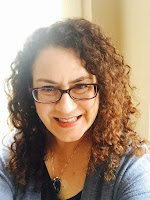 Cryssa Bazos is an award winning historical fiction writer and 17th century enthusiast with a particular interest in the English Civil War. She is a member of the Historical Novel Society, the Romantic Novelist Association and is a co-editor and contributor of the English Historical Fiction Authors blog. Her debut novel, Traitor's Knot, is published by Endeavour Press. For more stories, visit her blog cryssabazos.com
Useful Links
Website Facebook Twitter Instagram