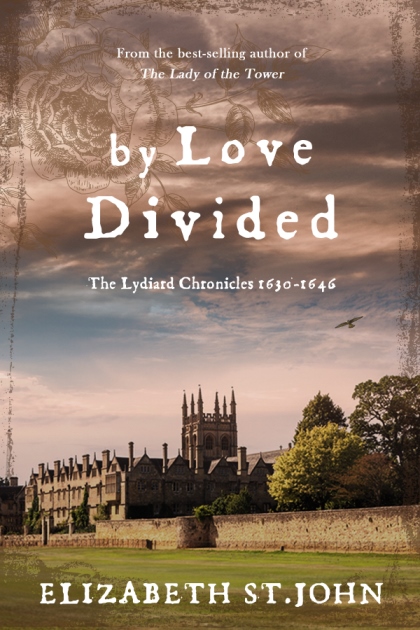 Royalist Sir Allen Apsley thinks his choice is clear, but when his mother embraces the Puritan cause, and his beloved sister Luce falls in love with John Hutchinson, a Roundhead soldier, his loyalties are tested. Is it family first? Is it country first? As England falls into bloody civil war, Allen must fight for king and country, while Luce embraces Parliament’s radical views and confronts the very core of the family’s beliefs. And when their influential Villiers cousins raise the stakes, Allen and Luce face a devastating challenge. Will war unite or divide them? In the dawn of rebellion, love is the final battleground.

Based on surviving memoirs, court papers and letters of Elizabeth St.John’s family, By Love Divided continues the story of Lucy St.John, The Lady of the Tower. This powerfully emotional novel tells of England’s great divide, and the heart-wrenching choices one family faces.

“I am completely blown away by Elizabeth St. John’s follow up novel, By Love Divided. The depth of her characterization, the elegance of her prose (and dialogue) and the masterful way in which she presents the realities of the English Civil War such that we’re bleeding for both sides is nothing short of brilliant. If you want a compelling, exquisitely written story to immerse you in the past, By Love Divided is a must read! I consider it one of my favourite historical reads and it’s earned a place on my keeper shelf! 5 plus stars!”
Cryssa Bazos, Author of The Traitor’s Knot 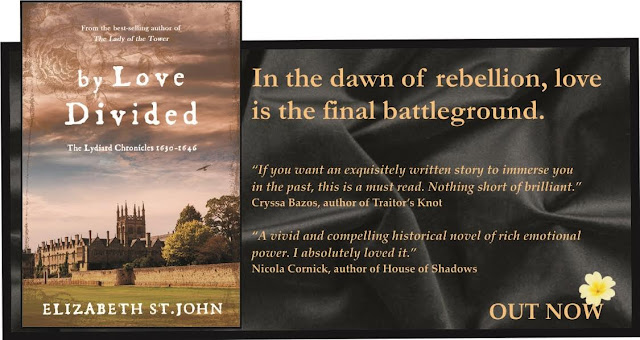 My mother showed as much humility and patience, under that great change, as moderation and bounty in her more plentiful and prosperous condition.
Luce Apsley
21st March 1633

Leaving the partitioned chamber and descending the broad stairs into the echoing expanse of Westminster Hall, Luce and Babs briskly crossed the flagstone floor, wooden heels clicking. Groups of clerks huddled under the arched windows, using the diffused light to proof their work, while lawyers steered their clients to recessed embrasures for private conversations. Although tempted to stay and peruse the stacks of tomes at the booksellers’ stalls, Luce had no interest in the bloodsucking lawyers standing in the hall, preying on their troubled victims. Even if her mother’s purse permitted legal counsel to guide them through the maze of interrogatories, she would not have trusted these corrupt lawyers with their defense.

“You were so composed, Luce.” Babs looked up at her. “How do you keep calm?”

“They are simply men and answer to the same God as I. He will be their judge as much as they are mine. And He sees all.” Pushing a strand of hair back under her starched white hood and adjusting her cuffed sleeves, Luce carefully straightened the decorative small bows. She must remember to sponge a clean set for tomorrow. The courtroom dust clung to the linen like a shroud.

“Our parents did nothing wrong, did they, Luce? That is a long list of items they accuse us of stealing.” Babs stopped still, her blue eyes filled with tears.

“Our father was the king’s man. His only crime was that of blind loyalty to a corrupt court and a foolish monarch who considers himself divine.”

“Hush, Luce, you cannot speak this way.” Babs looked around. “You sound like a Puritan. Remember Allen’s warning. Do not voice your opinions aloud.”

Luce ignored her, for she needed to spill the words denied airing before the judge.

“And you think it is right that our family lives in penury, our mother is dragged into lawsuits, our brother exiled behind the walls of his university to evade the interrogators, all because the king commanded our father to finance the Duke of Buckingham’s ill-planned French war?”

She steered Babs around a cluster of weathered country folk huddled around an extravagantly beaver-robed justice.

“Where is King Charles when his citizens are held hostage by a rough justice that no longer cares for the common man?” Luce waved her hand around Westminster Hall, disgusted at the sights and sounds of men’s grievances dissected before corrupt magistrates.

“Look around you, Babs, for this is what England has come to. You are not too young to learn.” Unspoken thoughts plagued Luce’s mind. “This day in Chancery Court has brought a new awareness, and your innocence is eroding in this knowledge.”

Luce dropped her voice. She cared not if Babs understood her words or not. This was the rhetoric she learned from the sermons she attended with her mother. The preachers did not hold back their anger. Why should she?

During the Blog Tour we will be giving away a paperback copy of By Love Divided to one lucky winner! Enter here.

• Giveaway ends at 11:59pm EST on November 28thYou must be 18 or older to enter.
• Giveaway is open INTERNATIONALLY.
• Only one entry per household.
• All giveaway entrants agree to be honest and not cheat the systems; any suspect of fraud is decided upon by blog/site owner and the sponsor, and entrants may be disqualified at our discretion.
• Winner has 48 hours to claim prize or new winner is chosen. 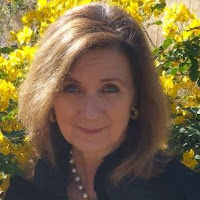 Elizabeth St.John was brought up in England and lives in California. To inform her writing, she has tracked down family papers and residences from Nottingham Castle, Lydiard Park, and Castle Fonmon to the Tower of London. Although the family sold a few castles and country homes along the way (it’s hard to keep a good castle going these days), Elizabeth’s family still occupy them – in the form of portraits, memoirs, and gardens that carry their imprint. And the occasional ghost. But that’s a different story…

By Love Divided, Elizabeth’s sequel to The Lady of the Tower, follows the fortunes of the St.John family during the English Civil War, and is out now.