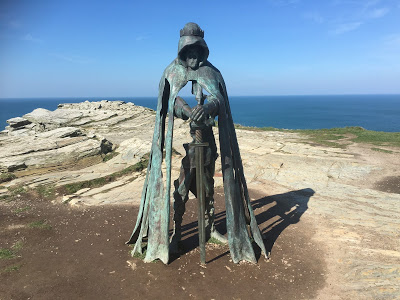 BBC 2’s much heralded documentary, King Arthur’s Britain: The Truth Unearthed, proved to be a bit of a disappointment. The grand reveal was that, well, there probably wasn’t a King Arthur at all and there is little evidence of battles between the Britons and Saxons raging across the Dark Ages.
TV historian and archaeologist, Alice Roberts, split her time between a dig at Tintagel in Cornwall, the reputed birthplace of ‘King Arthur’, and a dig site in Yorkshire where much evidence of Germanic-style housing had been unearthed, but no evidence of violent deaths or battle sites.


Historian Miles Russell was also given a platform to announce the findings of his study of the earliest source of the King Arthur story – Geoffrey of Monmouth’s 1136 epic work, The History of the Kings of Britain. His conclusions are also bad news for Arthur – he never existed! King Arthur, as described by Monmouth, is a composite of earlier kings and heroic events, constructed to fill a gap in his narrative. Hold on a minute – didn’t an earlier writer, Nennius, writing in the ninth century, record the twelve battles of King Arthur? Didn’t Nennius get Arthur’s name from earlier Welsh Chroniclers? There are other mentions of a heroic leader called ‘Arthur’ or ‘Artorius’ which must surely be the echoes of an oral storytelling tradition.
For me, the case is not proven. Monmouth may have taken a ‘real’ Dark Ages warrior called Arthur/Artorius and piled the feats of earlier heroes on his shoulders to build him up to superhero proportions. Monmouth’s primary aim, according to Russell, was to lay foundation myths for the British people in a time when the Norman conquest had finally and ruthlessly been bedded in. He was working, allegedly, from a ‘lost manuscript written in the native tongue’. Arthur may well have been mentioned, a real hero remembered through oral tradition. I get the ‘composite’ argument – tales of heroic events by earlier Briton kings and leaders may well have been compressed into one grand story of resistance to the spread of Saxon settlers. You see, in Norman England in the early twelfth century, the Anglo-Saxons had become the bad guys.
How likely is it that waves of Germanic tribesmen and their families would have ‘found’ good farming land and settled without any opposition from Britons? It is a fair assumption that post-Roman Britannia would have reverted to earlier tribal lands ruled over by a chief or king. They would surely have wanted to defend their lands from foreign settlers? The Angles, Saxons and Jutes were warrior tribes who would have been more than capable of taking what they want and imposing their will with blade or axe.
Just because archaeologists have not found any sites of fifth or sixth century battles or graves of slain warriors, doesn’t mean they are not there, hidden deep underground. Do we ignore the writings of monk Gildas, one of the earliest surviving reliable texts from the mid-sixth century, who lamented the ruin and conquest of post-Roman Britain?

Alarming stuff from Gildas, who also mentions frightened people taking to the hills – perhaps a reference to the re-occupation of Iron Age hillforts in the years after the Roman evacuation – something the archaeologists do support. The evidence of massacres and battles may yet be forthcoming, so it’s perhaps a little premature to draw the conclusion that the Anglo-Saxons quietly integrated into the eastern and southern Briton communities without resistance based on one study of a patch of land in Yorkshire. Also, the evidence of continuing trade with Europe and the Mediterranean at Tintagel reflects a micro-economy in the south-west. Sorry Alice, your conclusion of a bloodless colonisation and the assertion that King Arthur, or Arthur ‘Dux Bellorum’, did not exist to lead Briton resistance reflects contemporary themes and smacks of political correctness.
I for one don’t think the Britons either fled or submitted to slavery before waves of Germanic tribesmen without some attempt at resistance. The fleeing may have come after the defeat of their warriors. After all, we know it took the Anglo-Saxons over two hundred years to establish their kingdoms across what is now England. The whole truth about what happened in fifth and sixth century Britain is far from having been unearthed. Keep digging! 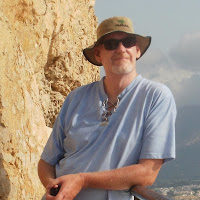 Tim Walker is the author a three-book historical series, A Light in the Dark Ages. His particular obsession was to link the end of Roman Britannia to the start of the Arthurian legend, as described by Geoffrey of Monmouth, as a ‘believable’ and possible alt-history. It is researched historical fiction that poses the twin questions, ‘what really happened and who led the Briton resistance?’ Perhaps we shall never know and must make do with the myths, legends and conjecture that fill the black hole in our history.
Author's Website. 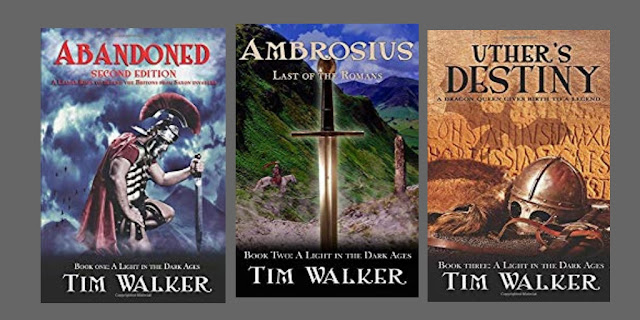