The Missionary
By Rowena Kinread Publication Date: 28th April 2021
Publisher: Pegasus Elliot Mackenzie Publishers
Page Length: 357 Pages
Genre: Historical Fiction
Patricius, a young man of Britannia, is taken from his home and family when Gaelic pirates attack his village. On his arrival in Ireland, he is sold as a slave to the cruel underking of the Dalriada tribe in the north. Six years later, Patricius manages to escape. His journey takes him through France to Ravenna in Italy. His subsequent plans to return to Britannia are side-tracked when he finds himself accompanying several monks to the island monastery on Lerinus. His devotion to his faith, honed during his captivity, grows as he studies with the monks.Haunted by visions of the Gaels begging him to return to Ireland and share the word of God with them, Patricius gains support from Rome and his friends to return to the land of his captivity. His arrival is bitterly opposed by the druids, who have held power over the Irish kings for many years, and he and his companions must combat the druids to succeed in their God-given mission.

Patricius stayed close to the door all night. He breathed through his mouth instead of his nose and tried to inhale fresh air through the wooden cracks in the walls. His whole body was itching so badly from thunderbug bites that his skin was burning and felt as though it were on fire. He didn’t sleep. He didn’t even try to sleep. His senses were on full alert. He was scared stiff. The whole night he heard strange noises. Other slaves coughed, wheezed and snored. He heard every fart. Sometimes a man stood up and peed against the wall; he heard and smelt the jet of urine. Patricius was repulsed and nauseated. He could make out the scuffling and scratching of rats. Never in his whole life had he dreamt that he would end up in such an abominable place.
The seconds turned to minutes and the minutes finally to hours. Birds twittered and streaks of grey and apricot lightened the black night. A cockerel crowed and Patricius heard people in the ringfort moving about and dealing with their morning tasks. One of Miliucc’s servants materialised, unlocked the door and steered the prisoners out.
In the middle of the ringfort there was a trough filled with water where the animals could drink during the night. It was to this trough that the slaves now went and started splashing water over their hands and faces. They all used the same water until it became filthy and black. Some even scooped the water into their mouths, gurgled and spat it out into the trough again. Patricius couldn’t induce himself to line up and wash. He preferred to stay dirty. Was it really only six days since I was captured in Bannavem Taburniae? he thought. It felt like six months ago. Oh, how he wished he could wake up and discover it had all been a bad dream. 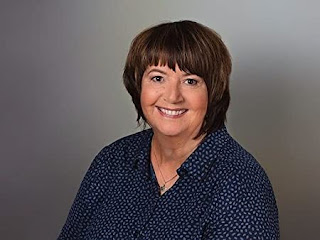 Rowena Kinread grew up in Ripon, Yorkshire. After leaving school she started working for Lufthansa in Stuttgart. There she met her future husband whom she married in Ripon. After raising 3 children, she began working as a secretary in a private physiotherapy practice. At the same time, she started writing non-fiction books and magazine articles. Retirement finally brought the financial security to start writing full length fiction. A keen interest in history and her own family ancestry inspired her debut novel “The Missionary”, the dramatic story about the life of St.Patrick.  A second book “The Scots of Dalriada” will be published this year. Ms. Kinread says that she welcomed retirement and all its wonderful opportunities to launch a third career.