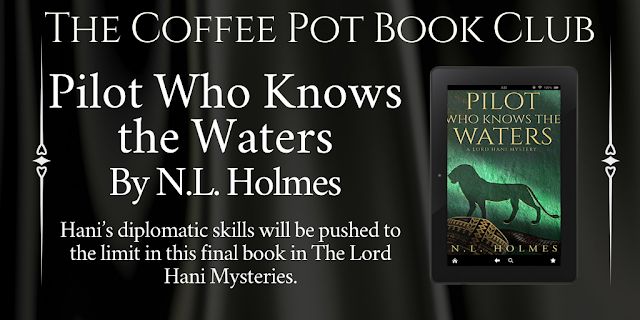 Pilot Who Knows the Waters
(The Lord Hani Mysteries Book 6)
By N.L. Holmes 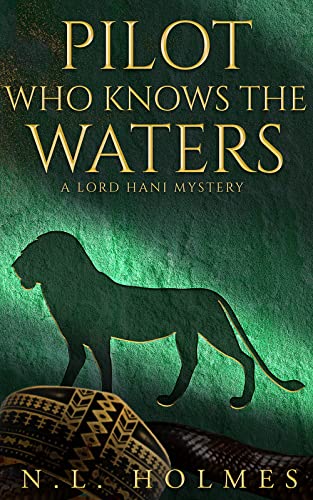 Hani must secretly obtain a Hittite bridegroom for Queen Meryet-amen, but Ay and the faction behind Prince Tut-ankh-aten are opposed—to the point of violence. Does the death of an artisan have anything to do with Ay’s determination to see his grandson on the throne? Then, another death brings Egypt to the brink of war… Hani’s diplomatic skills will be pushed to the limit in this final book in The Lord Hani Mysteries.

Lord Hani, please introduce yourself to our readers.

My name is Amen-hotep called Hani son of Mery-ra. I’m a career diplomat serving the sun god Neb-khepru-ra Tut-ankh-aten, as I have served his father and grandfather before him. A native of the city of Waset—Thebes, as you would call it—the southern capital of the Two Lands, I followed my own father in the career of military scribe, specialising in foreign languages, but at a certain point the vizier invited me into the diplomatic corps. My dear wife, scion of a priestly family, is a chantress of the god Amen-Ra, and, like good Thebans, we are all devoted to the Hidden One. So you can imagine the upheaval the recent reign of Nefer-khepru-ra Akh-en-aten, with its religious overturnings, created in my family. But I suppose I’m the kind of fellow who sees the good side of life rather than its trials. The love of my family and friends, the little pleasures of life like a good meal or a welcoming garden, the beauties of creation, including those perfect creatures, the birds, are enough to make me happy.

If you could live anywhere in the world, where would it be?

Ha-ha! An easy question! In Waset, of course. I have traveled about as widely as any man in the Two Lands, visiting most of our vassal states and even the distant lands of Kheta and Naharin, and while the gods have made every corner of the earth beautiful, I find my own ancestral city the most beautiful of all. It’s a rugged, rock-ribbed, arid land—not like the lush cities of the northern kingdom—set among the cliffs of the Red Land and the murderous heat of its desert, but brought to life by the Great River that runs through its heart. If only you could see it as it was in my day, before ugly tall buildings and all sorts of pollution. And the Ipet-isut, the Greatest of Shrines dedicated to Amen-Ra and his family—an incomparable gem, the largest, most splendid religious building ever constructed. Nowhere else has anything even remotely as magnificent. Surely, it is a city dear to the gods.

What would you consider to be your greatest strength?

I guess I’d have to say my ability to get along with others. It has served me in good stead as a diplomat. But there’s no virtue in it—it’s just the way I am. I love people; I find them fascinating, whether they’re my fellow countrymen or foreigners. I want to understand them better. Maybe that’s what has drawn me into so many investigations—simply the desire to understand why people do what they do. I was lucky enough to grow up in a very loving family with a strong sense of humor, and that has made it easier to care about others without seeing them as threats or enemies, I guess. I hope I’ve given my own children the same kind of open-hearted environment.

What is your biggest regret?

I’m not generally the sort of man who thinks in terms of “if only.” I prefer to live in the present moment, which is where the blessings of the gods lie.

But if there were one thing I wish I could undo, it would be the terrible act of malice that cost my eldest daughter her ability to move. She was pushed from a boat when she was just a girl, and I was unable to protect her. Only a few feet away, I knew nothing about the advances of a predatory soldier, who ended up pushing her onto the quay and breaking her back. (Hani is silent for a moment; struggling to control his face.) There was an unhappy man acting out the suffering inflicted on him when he was a child. Did that justify him? Does that make my Baket-iset’s suffering any more just? No. And since I can’t change it, I try to accept as Baket has, with perfect grace. I fear I’m not as successful as she.

Which do you prefer: fine dining or a picnic?

Oh, I wouldn’t object to a full banquet! You can tell by looking at me that I enjoy eating only too well, and my wife is a wizard at coaxing the best out of our cook. But I must say, the sweetest meal of all is the simple fare eaten in the garden with my family around me. A little beer, a little bread, some fried fish, perhaps, and fruit from my own trees. Yes, that sublime pleasure of food you have grown yourself and shared with those you love!  Nub-nefer my wife at my side, the children all around, and the grandchildren playing at our feet. It’s like a slice of eternal life in the blessed Field of Reeds!

If you could choose a magic power, what would it be?

Now, that’s a more difficult question. I can imagine some powers that would be useful to me in my professional life, but I think what I would really like to be able to do is bestow happiness on people. Because peace among nations flows from that. And there are so many people who are not happy—not at peace with themselves, not satisfied with the lot the gods have given them, fearful of the truth. My good friend and superior Ptah-mes isn’t a happy man, although he’s an admirable person, rich and handsome, extremely competent and successful. He was taught never to be satisfied, it seems; he’s incapable of thinking he’s good enough. I would like to take that burden from him. But perhaps this doesn’t require a magic power. Perhaps the secret is simply to love these people. I can see my daughter Neferet’s timid little friend Bener-ib growing so much more free and brave as the fact that she is loved sinks in.

Hani and Hattusha-ziti finally rejoined the encampment of Prince Zannanza on the skirt of the highlands overlooking the capital city of Aziru. The fine weather and the memory of Aziru of A’amu, who had been both an adversary and a house guest years ago, improved Hani’s mood. How could a man’s little problems outweigh the beauties the good gods have prepared for us? It seemed the caravan had turned into a hunting party, and Hani thought it a highly successful one at that, judging from the pelts stretched out to dry on lines. At least the prince, too, was in a good mood.

“Well, how does it look, Hattusha-ziti?” he asked when the two emissaries met with him. His face was flushed from the autumn spent outdoors, his eyes bright with expectation.

Hattusha-ziti shot Hani a quick glance and drew a deep breath. “My prince, the political situation in Mizri is dangerous. Civil war is already breaking out, from what I’ve seen, and many leaders of the party favorable to our alliance have been put to death. There is, in fact, another candidate for the throne, and he has powerful supporters. I fear I must tell your father that I cannot counsel him to go through with this marriage.”

Zannanza’s dark eyes grew opaque, and he turned away, his nostrils tense. Hani could almost perceive the cold radiating from him, like the smoke of an icy flame. “That’s not what the Great King wants to hear, Hattusha-ziti,” the prince said between his teeth.

“I must speak honestly, my lord.”

The chamberlain managed a neutral tone, but Hani realized he was nervous. Even this cool, experienced diplomat was reluctant to cross the volatile prince. For his part, Hani stood in silence, hoping his existence would go unnoticed—his could only be an inflammatory presence.

“I must speak honestly, too, cousin,” Zannanza said, his anger dangerously coiled. His back was still to them. “I will countermand your counsels. You have no right to take this from me.” He turned brusquely to face them. “My father wants this marriage, and he shall have it.”

He spun on his heel and stalked away between the tents, trailing his fury.

Hattusha-ziti’s face had grown crimson, but he was expressionless. Hani could only guess at the emotion that had brought the blood to the Hittite’s cheeks, because even Hani, breath suspended, wanted badly to slink away. He should never have witnessed the dressing down of a colleague.

After a painful moment during which neither of the men spoke, Hattusha-ziti said levelly, “I’m going directly to Hattusha. There’s no need for you to accompany me, Hani. I’ll be back with the king’s decision in two weeks or so.” 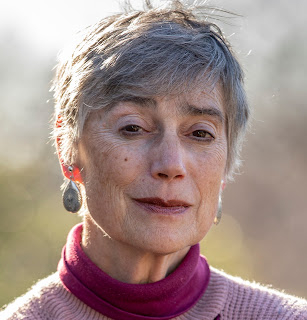 N.L. Holmes is the pen name of a professional archaeologist who received her doctorate from Bryn Mawr College. She has excavated in Greece and in Israel and taught ancient history and humanities at the university level for many years. She has always had a passion for books, and in childhood, she and her cousin (also a writer today) used to write stories for fun.