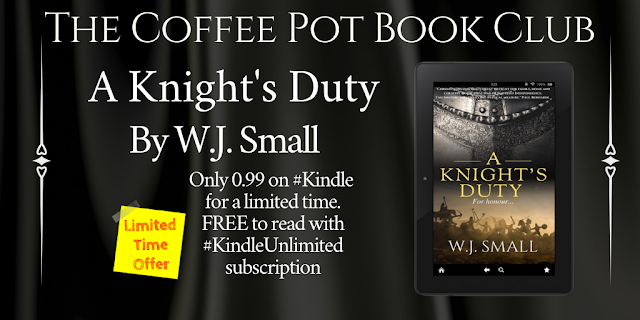 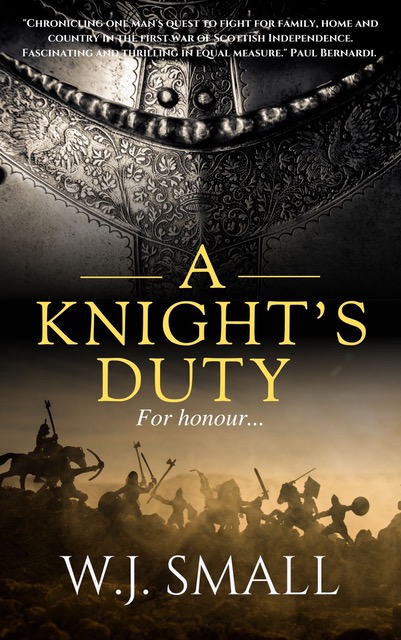 Tension between England and Scotland is at the breaking point when William Wallace launches a ruthless attack on the English garrison at Lanark.

King Edward I responds with a brutal siege at Caerlaverock Castle.

Northumberland soldier Thomas Gray, son of a bullying father and brother to a traitor, is drawn into the conflict.

While serving under Edward I, Thomas almost loses his life during the siege of Stirling Castle when he is hit by a crossbow bolt fired by one of its defenders.

When his home and family are attacked by Scottish forces, Thomas acts to save what is dear to him.

Torn between a family with divided loyalties and a country falling into chaos, Thomas must rise to become a knight, unafraid of death or killing.

The knight must do his duty - or die in the act.

Congratulations on your recently published novel, A Knight's Duty. Could you tell us a little about your book?

A Knight’s Duty is a historical novel based upon the life of the real 14th century Northumberland knight Thomas Gray, who fought during the First War of Scottish Independence. Thomas Gray was one of many individuals from Northumberland who lived on the England/Scotland border and had to choose a side to fight for under the reigns of Edwards I and II. Gray decided to fight for England. The book focuses not only on his battle experience but his relationships with family, friends, and those serving the Grays’ castle, Heaton.

When researching this era, did you come upon any unexpected surprises?

Probably the biggest surprise I came across was how sophisticated people were during the 14th century. From our 21st century perspective, I think we tend to regard those who lived so long ago as rather simple. In fact, the opposite is true. Militarily, Edward I’s gigantic trebuchet “War Wolf” was an engineering marvel, even by current standards. And although 14th century individuals clearly lacked our knowledge of pharmacology, they found effective medicinal uses for what was available to them. In both history and A Knight’s Duty, people used sphagnum moss, which was prevalent in that region, as an effective treatment for wounds and a natural antiseptic. Other herbal remedies were used to successfully ward off infection and treat illnesses. It was not unusual to see homes with gardens created specifically for this purpose.

Why do you think this period in history is still really popular with readers?

I think for many people, delving into another time is a great escape, especially with the tumult our world is experiencing right now. We tend to romanticize the past, especially with childhood stories and movies of gallant knights rescuing damsels in distress from castle turrets. We think of the past as a romantic and somewhat “easier” time. The reality is that life in the 14th century was often brutal and fleeting, especially if you were a woman or a warrior.

What do you think is the most challenging aspect of writing Historical Fiction during this era?

The most difficult part of writing about the 14th century was trying to remain historically accurate. It took a lot of research to discover what was legitimate and what wasn’t, especially since records from this time period tend to be scant. Many things we take for granted now simply did not exist back then. For example, people did not have clocks, so no one said things like, “in a minute.” A minute was an unknown concept! Fires heated homes but were in the center of the room, not like the hearth we know today. Wine was bought in casks, not bottles, floors were often covered in reeds, not carpeting, and window glass were a rarity reserved for only the wealthiest in society.

Clearly, Thomas Gray is someone I hold near and dear. He embodies some of the best traits in people - he is loyal (almost to a fault), kind, and brave. Unlike many nobles of his day, he cares about those less fortunate. Although he possesses these qualities, he also has faults that make him relatably human. He expects the best in people, and when they don’t fulfill his expectations, his sense of betrayal runs deep. He vacillates between pragmatism and impulsivity and tends to lash out when his character is questioned.

Although not a main character, another character I have great fondness for is Larkin Fenn, the son of a serf who Thomas takes under his wing. Larkin, like Thomas, is loyal, but, unlike Thomas, he is an innocent. He wears his heart on his sleeve. In a time where brutality is more the norm than not, Larkin’s genuinely sweet and sometimes naive disposition greatly contrasts to those around him.

Only 0.99 on #Kindle for a Limited Time
Amazon
Free to read with #KindleUnlimited subscription W. J. Small is a runner, dog lover, and avid historian, focusing on late medieval Britain. She became fascinated with Thomas Gray while researching the First War of Scottish Independence and was soon drawn into the labyrinth of early 14th-century life. When not enmeshed in the past, she splits her time between New York and South Carolina, where she lives with her husband, son, and two Jack Russell terriers.