Have a sneak peek between the covers of Renee Yancy's fabulous novel — More Precious Than Gold (The Hearts of Gold Trilogy, Book 2) #HistoricalFiction #HistoricalRomance @YancyRenee 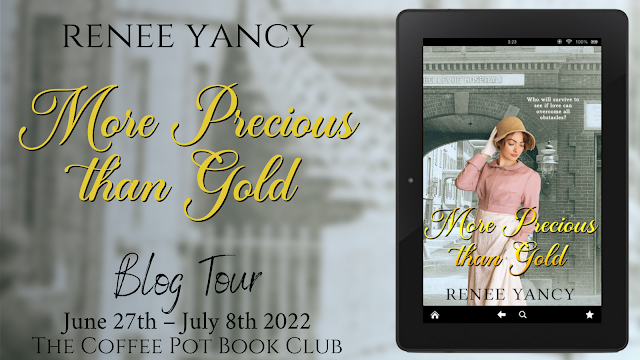 More Precious Than Gold
(The Hearts of Gold Trilogy, Book 2)
By Renee Yancy 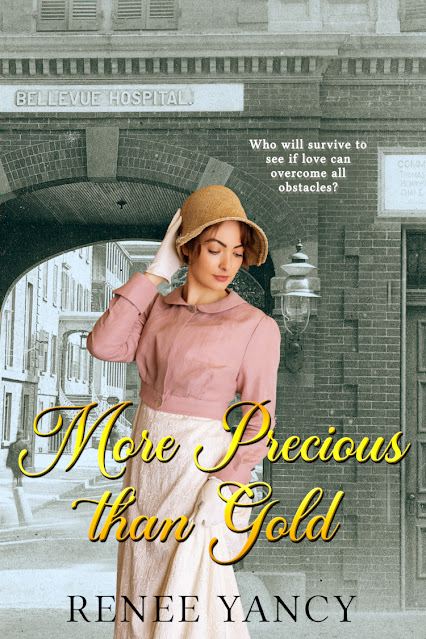 Publication Date: 28th June 2022
Publisher: Vinspire
Page Length: 345 Pages
Genre: Historical Romance
A young woman refuses to become a pawn in her grandmother’s revenge scheme and forgoes a life of wealth and royalty to pursue a nursing career as America enters WWI and the Pandemic Flu of 1918 wreaks havoc in New York City.

The summer sky twilight had deepened to rose and gold, and a sweet breeze laden with the scent of Mama’s roses rustled the lace curtains at the parlor windows. Mama’s eyes were puffy, but she bravely pasted a tremulous smile on her face as Papa walked into the parlor, tall, straight-backed, and clean-shaven in his Army uniform, his officer’s cap on his head with its patent leather brim, and a wide leather belt around his waist. A cross at each shoulder and on his cap attested to his office of chaplain. He saluted them smartly.
“Major John Winthrop, 2nd Battalion, 16th Infantry Regiment, reporting for duty.”
“Oh, Jack.” Mama went into his arms. “How will I bear it? I can’t, I can’t.” She buried her face in his neck, her slender shoulders shaking.
“You must, darling.” He looked over her head at Kitty. “We all must.”
“And why must you leave tonight?” Kitty asked. “Why can’t we accompany you?”
“It’s being kept quiet at the moment. I don’t know why. But it’s better here in the comfort of our own home. It would be a madhouse on the wharf, and I’ve no wish for you to see that.”
“A madhouse, Papa? Why?”
Her father gave her a grave look. “Much weeping and gnashing of teeth, sweetheart, to use a Bible phrase.”
Kitty frowned. “At the Red Cross ball, everyone cheered when the declaration of war was announced. The boys, especially. Some of them left immediately to sign up. They were excited to do so.”
“The innocence of youth.” Her father smiled sadly. “I’m afraid they don’t know what awaits them in France.”
“Glory and advancement, according to them,” Kitty said.
Her mother turned, frowning. “Kitty, surely you understand that some of them won’t be coming back?”
Kitty sat down abruptly. “Won’t be coming back? I…I hadn’t actually thought about it. Oma has kept me so busy with the social calendar that I…” She closed her mouth, hearing the shallowness of her own words.
Her mother walked to the parlor table and picked up the newspaper lying there. Wordlessly, she handed it to her. Kitty took the paper and unfolded the front page. The headline jumped out at her.
41 Killed, 121 Injured In Air-Raid of Eastern London Big Attack In Clouds Follows
The story continued, in smaller print below the headline.
60 Children Among Victims of German Raiders
“People are dying, Kitty,” her father said softly. He gave a sideways glance at Mama.
Kitty stood, frozen to the spot, as a cold shiver trickled down her spine. How could she have been so blind and stupid? No wonder Mama had been crying. She couldn’t know if she’d ever see Papa again. Kitty choked and took a step toward him.
Right here, right now, she would say goodbye to her beloved father, not knowing if he would return. 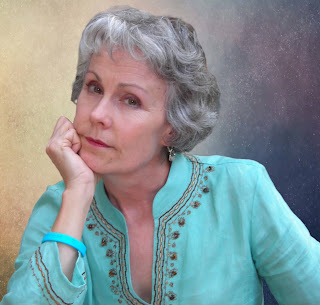 Renee Yancy is a history and archaeology nut who works as an RN when she isn’t writing historical fiction or traveling the world to see the exotic places her characters have lived.

A voracious reader as a young girl, she now writes the kind of books she loves to read—stories filled with historical and archaeological detail interwoven with strong characters facing big conflicts. Her goal is to take you on a journey into the past so fascinating that you can’t put the story down.

When she isn’t writing, Renee can be found in the wilds of Kentucky with her husband and a rescue mutt named Ellie. She loves flea markets and collecting pottery and glass and most anything mid-century modern. 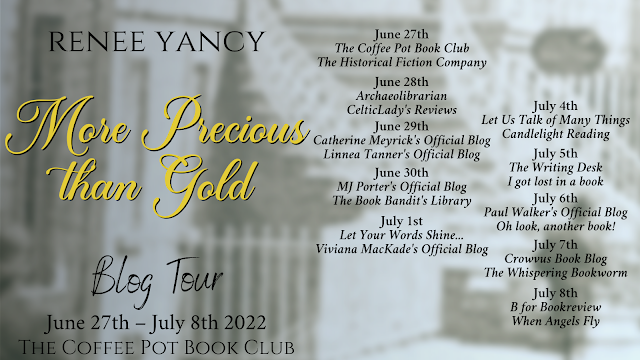