It is my very great pleasure to welcome back historical-fantasy author Keith.W.Willis. Today, Willis, is going to tell us about his inspirations behind his latest book, - Traitor Knight - which I just so happened to have had the pleasure of reviewing. You can check out my review here. 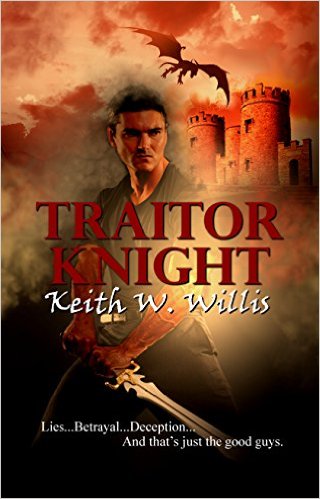 When Morgan McRobbie rescues a damsel-in-distress from a dragon, he expects she’ll swoon, murmuring “My hero!” Instead, Marissa has only loathing for the man everyone believes will betray Kilbourne. That’s fine with Morgan. A woman in his life would just complicate things.

A high-level informer threatens the kingdom’s security, and Morgan is out to stop him. Posing as a turncoat himself, he’s walking a fine line between honor and betrayal. A single misstep could result in disaster, and his mission is fraught with distractions: the pesky dragon, a pair of conniving courtiers, and the disillusioned damsel who’s certain Morgan can’t be trusted.

If Morgan’s going to save the kingdom, win the girl, and manage to stay alive, he’ll need to step up his game. Because the traitor is lurking in the shadows, and his scheme calls not just for the betrayal of Kilbourne, but also the destruction of Morgan McRobbie.

I cut my teeth on Arthurian legend. Literally. My mother practically threw me in the dungeon for daring, as a mewling infant, to chew on her copy of The Sword in the Stone.

So naturally TH White’s classic ended up being the first fantasy book I ever read (and it’s still, in my opinion, one of the best). I was never that enamored of the Disney version, by the way. But I loved the way White presented not just the story, but also the history of the period. He essentially snuck in all these little lectures, rather like slipping a pill into your chocolate ice cream. You got it without actually realizing it.

While Traitor Knight is technically classified as a historical fantasy, I couldn’t replicate White’s feat of sneaking in all the wonderful obscure historical details. Didn’t want to, in fact. I like history, but only when I’ve made it up myself. So while there are parallels to Western Europe of the Middle Ages or Renaissance period as a basis for the Kingdom of Kilbourne, I’ve not attempted to bring in any real historical details. I’m lazy, and didn’t want to do the exacting research necessary—it was much easier to just invent it all. In this fashion, too, I don’t have to worry about critics calling me out on anomalous details.

Back to TH White. Of course I’ve read the not just The Sword in the Stone, but the entirety of White’s The Once and Future King. And The Book of Merlyn. His telling of the Arthurian legend has infused not only my work, but that of countless other writers whose stories deal with chivalric knights, fair maidens, and court intrigue.

In the opening scene of Traitor Knight, Sir Morgan McRobbie, Knight-Commander of the King’s Legion, risks his life to rescue a damsel-in-distress from a dragon. He does so because that’s what he’s sworn to do. He’s just a guy doing his job, even if he does come across as a bit pompous when he tells Marissa, the disillusioned damsel he rescues, “It’s my oath-bound duty to see justice done and evil banished from the kingdom.” Marissa retorts “My word! Did they teach you that in knight school? A pretty speech and a most noble sentiment. It does you credit, I’m sure. But you shall have some reward. I won’t have it said any man had a claim on me.”

But Morgan gives no thought to reward, and when Marissa insists he accept a boon from her, he declines, stating “you have thanked me, and that will suffice.” Chivalry personified—even though he’s considered a traitor by all and sundry, he still maintains the chivalric tradition handed down by Arthur and the Knights of the Round Table.

But I honestly think my writing owes a lot less to the entire, tragic Arthurian mythos than it does to the initial, brilliantly witty Sword in the Stone. White showed with this book that there was room for a playful sensibility in historical fantasy. Granted, he got pretty intense with the later parts of TOFK, but there’s such a marvelous sense of fun in Sword in the Stone. It shines through and imbues this story with light and wonder and delight. That’s the mythology I’ve tried to infuse into my own opening salvo into the world of fantasy.

I wanted, in all honesty, to turn the chivalric trope on its ear a bit. To take the heroic Morgan, who does all the right things (and sometimes the wrong things) for the right reasons, and make him an anathema to everyone around him. It’s darned hard to be a hero when everyone hates you (just ask Spiderman). He’s posing as a traitor in a classic “set a thief to catch a thief” plot. Unfortunately, his act is so good that everyone from the Lord High Chancellor to the boy who cleans the grates absolutely believes him the turncoat he’s pretending to be. Especially Marissa, whom Morgan finds himself falling for, even as he cavalierly uses her to further his own schemes. The motto on the McRobbie coat of arms translates to “As Need Requires” and as Morgan explains, “We do what needs to be done.” Even, it would seem, at the cost of his own reputation and any chance of winning the girl.

While that may not sound like much fun—it certainly isn’t for my hero—I’ve tried to imbue that sense of playfulness into the story. None of the characters really take themselves that seriously. Oh, the situations they’re thrust into are serious, often life and death. But their responses are, I think, more typical of characters from PG Wodehouse, the grand master of comic fiction, than they are of the traditional fantasy cast. They banter and toss out snide comments and, while they refrain from actually pulling a face-palm, you can often tell they would if such a thing existed in their world.

A large part of Traitor Knight is driven by the old idea that the writer needs to “get your hero up a tree and then throw rocks at him before you get him down again.” In my case, I thought that it would be much more fun to get Morgan up a tree, throw rocks at him, have him scramble into another tree, fire off a few flaming arrows (which, naturally, set the trees alight), and then start sawing down the tree as the dragons converge on it, only to have him fall from the topmost branch, hitting every limb on the way down and land on the back of one of the dragons. I’ll let your imagination take it from there…

Speaking of dragons, there is indeed a dragon (Wyvrndell by name) who appears in Traitor Knight. He is, in fact, the catalyst who starts the story, and though he doesn’t get a lot of play in this book, you can rest assured sure he’ll be back in Vol 2 (for some strange reason, lots of people seem to feel Wyvrndell is one of my best characters…)

While I owe something to the legend of St. George and his erstwhile draconic opponent, I’m afraid my dragon (and probably a lot of the book) derives more from the mythos of Looney Toons than from St. George. Specifically from the marvelous “Knighty Knight Bugs”. If you’re a poor deprived soul who’s never seen this 1958 gem, be sure check it out:

I dare you not to guffaw. Dragons, as The Black Knight so aptly proclaims, is sooo stupid. Well, mine may not be stupid, but like the Black Knight’s dragon, he does get the hiccups at the most inopportune moments.

So there you have it. TH White; PG Wodehouse; Bugs Bunny. My shining inspirations.  Hey, nobody said this whole writing thing had to make sense, did they?


Where can I buy Traitor Knight?

Keith W. Willis graduated (long ago) from Berry College with a degree in English Lit. He now lives in the scenic Hudson Valley/Adirondack region of NY with his wife Patty. They have one grown son, Matt, who actually thinks it’s pretty cool that Dad wrote a book.Keith’s interests include camping, canoeing, and Scrabble. Keith began writing seriously in 2008, when the voices in his head got too annoying to ignore. When he’s not making up stories he manages a group of database content editors at a global information technology firm. TRAITOR KNIGHT is his first published novel.