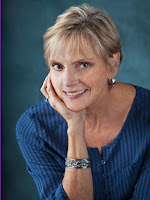 It is my great pleasure to welcome historical fiction author, Nancy Blanton, on to the blog today to talk about her inspirations behind her latest book...

The Prince of Glencurragh
(Due for release July 2016)

Sex Appeal and the Earl of Ormonde 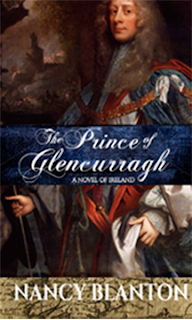 While researching 17th century Ireland for my historical novel, The Prince of Glencurragh, I was stopped in my tracks by an arresting portrait of James Butler, the 12th Earl of Ormonde and the 1st Duke of Ormonde.

Ascending to earldom in 1634 at just 24 years of age, this earl became the Royalist leader of the Irish confederate forces in 1649, uniting the old English nobility, Catholics, and Irish rebel soldiers in a passionate stand against English dominance that was doomed to failure under the boot of Oliver Cromwell and his army.

The portrait captures and older Ormonde, looking magnificent in ceremonial robes as he is created the first Duke of Ormonde. He wears white satin trimmed in red and blue. Delicate hands grasp lance and sword; his jaw is proud, his eyes soulful and knowing. The long golden locks affirm his noble stature and remind me of a young, proud-faced Roger Daltrey, out to change the world in his own particular way – perhaps with similar sexual energy but without Daltrey’s penchant for fisticuffs.

No less appealing would have been James’s enormous wealth and power. He was born into a family tracing back to the Norman Invasion in the 12th century. His ancestor, Theobold Walter, was named Chief Butler of Ireland, and thus the name stuck as a surname and reminder to everyone of the family’s prominence and favor under King Henry II. The family seat became the great Kilkenny Castle from which they controlled the vast kingdom of Ormonde (basically including counties Waterford, Tipperary and Limerick).

Ormonde landholdings in southwest Ireland were second only to the Desmond earldom by the 14th century. Rivalry and skirmishes between the two earldoms escalated into a private war in the 1560s, one that infuriated Queen Elizabeth I, and in part led to the first Desmond Rebellion in 1569. 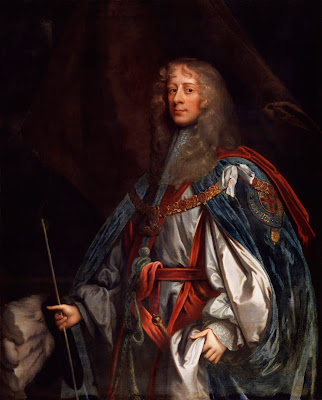 When James’s father Thomas died in a shipwreck in 1619, James became the nine-year-old heir to his grandfather Walter Butler, the 11th Earl of Ormonde, and was given the courtesy title of Viscount Thurles. Walter was a devout Catholic, much to the dismay of King James I who schemed for Protestant control of Ormonde estates, imprisoned Walter for eight years, and sent James to be schooled as a Protestant by the Archbishop of Canterbury.

When the earl was released in 1625, most of his estates were restored to him. James went to live with him at his house in Drury Lane, London.

While in London, James learned the Irish language, which was to serve him well later in life; and also met his cousin Elizabeth Butler, daughter of Sir Richard Preston, Earl of Desmond. Their marriage in 1629 ended the long-standing feud between the two families.

When his grandfather died five years later, James became the earl. In 1642, he was named the Marquess of Ormonde; and, after living with the king in exile during the Commonwealth years, in 1661 Charles II created him the first Duke of Ormonde.

But wait, there is even more to Ormonde’s appeal. Most of my research has focused on James’s early life, and my favorite story thus far is about his first attendance of the Irish Parliament in 1635. The new Lord Deputy of Ireland, Thomas Wentworth, called the Parliament under King Charles I’s authorization, and was proud to have Ormonde on the roster.

In his biography of Wentworth, C.V. Wedgwood describes James Butler as a “high-hearted” nobleman: “Handsome, intelligent and valiant, he was also to the very core of his being a man of honor: loyal, chivalrous and just.”

And let’s not leave out dauntless (aka cheeky). When Wentworth ordered that the wearing of swords in Parliament would not be permitted, Ormonde told the official who tried to take his that the only way he’d get the sword was if it was “in his guts.” Wentworth summoned Ormonde before his council to answer for this behavior, and Ormonde arrived with his earl’s patent from the king. He threw it on the table. The king had made him earl, he said, and for anyone less than the king he would not ungird his sword.

“Wentworth [who was not yet an earl] conceded the force of the argument,” Wedgwood wrote.

Appealing as he was, Ormonde was not always everyone’s hero in life. As the Protestant in the family, he avoided the land confiscations that Catholic family members still suffered, and he was not above evicting Irish tenants if he believed he could earn higher rents from English ones. Still, when Ormonde died in 1688, he was lauded by poets of his time and was buried in Westminster Abbey.

In my novel, Ormonde is featured as a contemporary of the main characters who brings his significant power and influence, his chivalrous mindset, and his own agenda to the story, along with a fierce belief in fairness, justice, and love.

The Prince of Glencurragh, publishing in July 2016, is the story of an Irish warrior who abducts a young heiress to help restore his stolen heritage and build the Castle Glencurragh. He is caught in the crossfire between the most powerful nobles in Ireland, each with his own agenda. It is the stand-alone prequel to my first historical novel, Sharavogue, which begins with the arrival of Cromwell in Ireland, and follows the protagonist to her indenture on an Irish sugar plantation on the island of Montserrat, West Indies.
Posted by Mary Anne Yarde at 08:00