'I couldn't recall the last time someone had care about me enough to curse my enemies with rhyming couplets.'

Way back in 2005, I was in the children’s section at Waterstones looking for a book that had a Roman or Greek theme. My eldest loved everything ancient history – and, incidentally, still does. One book caught my eye. It had on the front cover these words…

I picked the book up, took a quick look at the back cover, like what I saw and bought it. And so began my family’s love affair with The Percy Jackson series by Rick Riordan. We have all the books, including The Heroes of Olympus series, so when I was offered the chance of reviewing the ARC of Rick Riordan’s latest book, you can imagine my response.

Let's take a quick look at the book... There are some truly gifted children’s authors out there, and then there is Rick Riordan, who, in my opinion, is in a class of his own.

I adored the Percy Jackson series and I loved The Trials of Apollo. It is classic Riordan -- fast paced, laugh-out-loud funny, with really likable characters and horrible evil immortals who want to rule the world.  Apollo’s struggle to adapt to being mortal was incredibly well crafted, and it was great to go home to Camp Half-Blood, as well as meeting up with old friends such as Percy and Chiron.

I loved the idea of Apollo losing his godly powers and having to face life as a mortal. He really struggles to adapt to being just a regular teenager, sometimes with hilarious consequences. And despite coming across, for most of the book, as a narcissist, he was in fact a really likable character and I look forward to reading about his trials in the following books.


Despite the mythological world Riordan's books are set in, he does address some other ‘mortal’ issues with a delicate skill that should be commended. I think his books are fantastic for teaching tolerance. We are all human and we shouldn’t be judged - or judge - because of what we look like, whom we love, or where we come from. With this in mind, it is worthy to note that unlike the Percy Jackson series, this book seems to be targeted at a slightly older audience - it read as more of a Young Adult novel.


If you are looking for a fun mythological read, either for yourself (because I'm a grown-up and I loved it) or for your older children - teens - then look no further than the books by Rick Riordan.

Where can I purchase this fabulous book?
Amazon US
Amazon UK
And all good bookshops! 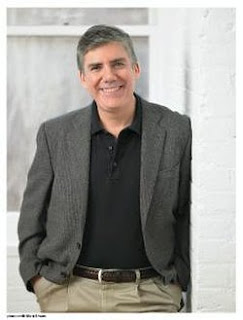 Rick Riordan is the author of the #1 New York Times bestselling Percy Jackson and the Olympians series for children and the multi-award-winning Tres Navarre mystery series for adults.

For fifteen years, Rick taught English and history at public and private middle schools in the San Francisco Bay Area and in Texas. In 2002, Saint Mary's Hall honored him with the school's first Master Teacher Award.

His Percy Jackson series features a twelve-year-old dyslexic boy who discovers he is the modern-day son of a Greek god. The Lightning Thief was a New York Times Notable Book for 2005. Film rights have been purchased by Twentieth Century Fox and a feature film is in development. The Sea of Monsters was a Child Magazine Best Book for Children for 2006 and a Publishers Weekly and BookSense national bestseller. The third title, The Titan's Curse, made the series a #1 New York Times bestseller, and the fourth title, The Battle of the Labyrinth, had a first printing of one million copies. Rick is also the author of The 39 Clues: The Maze of Bones, another #1 New York Times bestseller. Film rights for The 39 Clues have been purchased by Steven Spielberg and DreamWorks.