"[he]....was wounded in a battle and completely crippled, so that he's helpless now, for he was struck by a javelin through both his thighs; and he still suffers from it so much that he can't mount a horse. But when he wants to engage in some pleasure and sport he has himself placed in a boat and goes fishing with a hook"
Chrétien de Troyes, Perceval 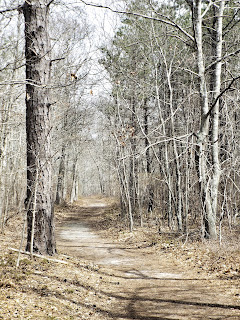 Back to the story...unfortunately, The Fisher King, thanks to his injury, can not sire a child - his kingdom reflects his injury, it becomes a waste land....barren.

But, there is hope for the Fisher King - he is not destined to spend the rest of his days fishing. One day a knight will heal him - it has been foretold.

Percival stumbles upon an old man fishing and, being a nice sort of chap, he strikes up a conversation with the elderly man. The fisherman directs Percival to a beautiful castle. To his surprise, Percival is welcomes by the fisherman - The Fisher King.  The Fisher King is the most hospitable host. He presents Percival with a sword and he announces that a huge feast is to be held in Percival’s honour. 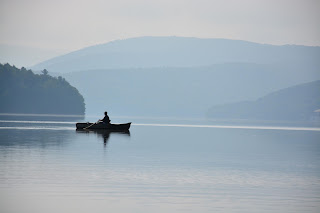 Now, Percival has spent his entire life in the woods - his mother having shunned the world after the death of Percival’s father. Percival has never been to a feast before and he is on his best behaviour. His mother has installed in him good manners, so when he is shown a candelabrum, a bleeding lance and a grail, he bites his tongue to stop asking any questions about these mysterious set of objects.

Of course, in a bitter twist of irony, the Fisher King’s only hope of being healed was for Percival to ask him questions about these objects. One can only imagine what The Fisher King must have been thinking! 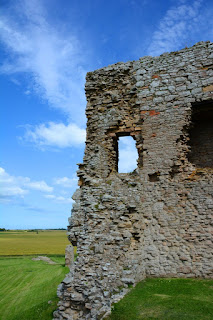 The feast comes to an end and Percival toddles off to bed. But where he awakes in the morning, he finds the castle in ruins and he is alone.

Unfortunately for us, Chrétien de Troyes died before he could complete his great work.

Some forty years later, Wolfram von Eschenbach takes up the story in his work, Parzival. This story keeps to the original, with a few subtle differences. Firstly, he gives The Fisher King a name - Anfortas. We learn how The Fisher King received his wound - he is a Grail Keeper and therefore is not allowed a wife, but he marries her anyway and this is his punishment - intolerable pain. Percival rights the wrong and later cures The Fisher King.

Around the end of the 13th Century, Robert de Boron, continued The Fisher Kings story. The Fisher King - who now goes by the name of Bron -  is the brother-in-law of Joseph of Arimathea. Joseph entrusts the sacred Grail to Bron. Bron becomes the first Grail Keeper - eventually the title of keeper of the Grail is passed on to Percival.

And then things really become complicated...!

In Lancelot-Grail, there are two Fisher kings  - or should I say one wounded king called Pellam and a Fisher King called Pelles. It is Pelles who tricks Lancelot into begetting a child with Elaine - there is a prophesy that states Galahad will retrieve the Grail and heal the land.

Not to be outdone, Malory, has four possible Fisher Kings in his famous story, Le Morte d'Arthur.

Of course with the passage of time the story has been retold until, it became just another part of the story...a part of the legend.

So there we have it, a brief outline of The Fisher King.

Email ThisBlogThis!Share to TwitterShare to FacebookShare to Pinterest
Labels: Arthur Pendragon. King Arthur and his Knights of the Round Table, Lancelot du Lac, The Fisher King, The Holy Grail