Forget everything you think you know about fairies, mermaids, and fauen's, because fantasy author C.A. Morgan is on the blog today. Read on for an exclusive interview with a very special mermaid ~ sorry, I mean a Glisseon, a fauen and a healer.

Step into the light and you'll see them. A headstrong young healer with wings, a mermaid with more than one secret, and a vengeful fauen - she just may slit your throat! Enter their world of Emrysia - part fantasy, pure fairytale, but NOT for the faint of heart. Because, here in the light, the Shadow is growing..... 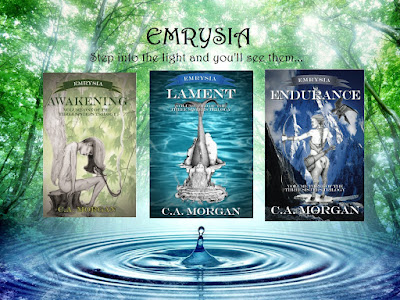 Vol. II: In this second volume of the series, ever more certain that they are the Chosen who must save Emrysia from the Reign of Shadow, Aryelle, Lureli and Eleanor are scarcely into their new journey when disaster strikes. Navigating through an increasingly treacherous and unfamiliar world, will they go their separate ways - if they survive! - or will fate lead them down even darker paths together?

Vol. III: In this the final volume of the Three Sisters Trilogy, backbone of the Emrysia Series, each of the three Chosen must face evil times on their own, without help from the others. Sent their separate ways by the Lydian Muse, Mandelbrot, each of the "Three Sisters" finds herself in treacherous and unexpected circumstances from which there is no easy return. As Aryelle, Lureli and Eleanor journey toward self-discovery, the shadow grows in Emrysia. Will they be able to save themselves and the world they love, or be doomed to eternal darkness?
***

MY: Hey guys, I'm Mary (MY), welcome to the blog. Since your creator is a little shy, I thought I would ask you - the main characters of this series - a few questions. How would that be?
Lureli : Of course! What would you like to know? I could talk about myself all day because, you know, there's nothing more interesting than a mermaid - not that I am one! I'm really Glisseon, but you land-dwellers always seem to want to put things into your own perspective, you know? It's all about you, or the Mer, as the case may be. Flippin' fins! You've got me confused now...what was I saying? Oh yeah, I guess I'd appreciate a little more attention-
Eleanor : Hunh! Is that even possible?
Aryelle : Could we please just answer this nice lady's questions?
MY: Thank you, Aryelle. So, you three are really sisters? How so? I mean, you're so different...?
Aryelle : We are of different races, true, but we are all sentient Emrysians-
Eleanor : Some of us a little more aware than others!
Lureli : Was that another insult? Why you stinking goat-girl!
MY: I can see that you don't always get along-
Eleanor : Ever-
MY: ...which seems pretty normal for siblings. But since you're so different, could you each tell me a little bit about yourself?
Lureli : I'll go first. (eye roll from Eleanor) Like I was saying before I was so rudely interrupted, I'm from under the sea. My people are gorgeous and fun-loving, and we live forever - provided a barracuda doesn't eat us or anything. We're all female except for a few Mermen that we have shape-changed into proper mates over the years. Not that I have one of my own. Well, actually...I do have servants, but most of them still live on shore-
Eleanor : She doesn't need to hear about your exploits! I'm an Aurrac fauen. I hunt, I fight, and I can beat any ram in hand to hoof combat with one hand tied. Period. Aryelle?
Aryelle : (sighs) My name is Aryelle, Daughter of Elazaryn, El'Kandhar of the Ka'Andharra Empaya, and heir to the exalted Seat. I do not yet know my true calling, though I am a healer by nature. This is why I must set out on questanna - to learn how to use my gifts to heal the rift between my people and the Naturra. That, and to somehow overcome the Kra'Nochta Empa'ana - the Reign of Shadow - that is encroaching over all of Emrysia.
MY: Wow - that's a heavy load for one so young! What do you do for fun?
Aryelle : Healing others is rewarding enough. I do not crave fun...though occasionally I visit the aviary or stroll the gardens.
MY: How about you two?
Eleanor : I hunt. I fight. Period.
Lureli : Okay then, goat-girl! We Glisseon have all sorts of entertainments. There's swimming, of course, and manta ray hunts, tuna races, reef tag, catch-the-clown fish, talent shows, the Coral Salons, the Asylum, midnight sing-a-longs on shore, urchin juice parties, kelp feasts-
Eleanor : I've seen you eat; it's not a pretty sight!
Lureli : Why, you-
MY: How about your most embarrassing moments?
Lureli : I'd rather not say...
Eleanor : When Gord and me were fighting and he knocked me flat on my-... my rear. I didn't even see it coming!
Aryelle : Sliding down that muddy bank into the Swamps of Dire; what a foul place! I can still smell that slime when my wings get wet...
MY:  What is the strangest thing about your homeland, Emrysia?
All three : Mandelbrot!!!
MY: Does anyone know what your author is working on next?
Lureli : (sticking out her tongue at Eleanor) Yes -  a prequel!
Eleanor : I heard a sequel.
Aryelle : Actually, she is working on both, plus another volume going more in depth with some of our support characters. She also mentioned something about a memoir, a collection of daily motivational essays, and several children's picture books. She is quite prolific. Someday, perhaps we, too, will each find and fulfill our true purpose...


***
Book Extract: From Emrysia Endurance: Vol. II of the Three Sisters Trilogy, by C.A. Morgan
“Well then, where is Aryelle? Why isn’t she back yet?” Lureli was more than a little frustrated at finding herself back at Rona’s warren, but mostly at being there alone with Eleanor. They were standing outside in the first rays of morning sunlight. The moment she opened her eyes and saw where she was she had bolted up the tunnel, leaving Eleanor to follow. Now Eleanor was trying none too patiently to explain.

“I had to get you back first. I thought you might resist coming.”

“You were right! I never even made it home! It’s not fair!”

“-are as good as dead to you, if they aren’t already! Get that through your thick fish skull! We’re all we’ve got, sister, for now at least.”

Lureli’s chin began to quiver. One lone, fat tear rolled down her cheek. “But you tricked me!” she squeaked accusingly.

“You know how; by pretending to be my dead mother!”

Eleanor looked at her as if she’d just grown horns. “What do you mean? I didn’t trick you. I didn’t even know your mother was dead! All I did was come back here to the Maze of Ages and say your name – just once!” she added preemptively, since Lureli looked about to argue. She heaved an exasperated sigh and began to stomp back inside.

Lureli gulped. “Is that really all it took?”

Eleanor returned far enough to glare at her. “I didn’t even know if it would work, okay? I thought I was wasting my time on some crazy idea that prophesy planted in my head.” She threw up her hands and began pacing. “I almost left. But then, I started wandering around here, trying to figure out the Maze, and where the two of you might be. I figured Aryelle could only be in her treehouse, but who knew where you might have ended up. Except-” she strode back to where Lureli stood, stopping only when they were hoof to toe. “Except I muttered your name out loud, and suddenly, here you were. Conjured up like a bad memory. It doesn’t matter anymore where you were…or who you were with, or how happy they made you. All that matters is that none of us can get out of being Chosen, like it or not. We’ve got a job to do, so let’s just do it and get it over with!”

At that very moment, Aryelle walked out of the warren. “Shall we be about it, then?” she asked.

They stared, dumbfounded. She was dressed like a fairy queen, all in colorful silks, her delicate feet swathed in fine slippers. Glowing like a lamp in the rosy morning light, her wings shimmered against the backdrop of the warren. More importantly though, they noted, she was no longer blind.

“That is a long story. Perhaps someday we will have time to share our tales. Now we have more important matters to discuss.”

“What are you doing here? I didn’t even call you yet,” blurted Eleanor.

“You must have. I heard someone clearly speak my name as I wandered the gardens,” said Aryelle walking between them, “-and knew it was time to return. I turned around a hedge, and suddenly, I was here.”

“Well, that’s strange! I spoke one name and one name only: Lureli. I might have thought of you both, but-”

“It seems that was all it took,” Aryelle told her. “As prophesy foretold, the eldest beaconed, and her sisters came. The Chosen are reunited.”

“Look, not to interrupt our little ‘family’ reunion, but that just doesn’t make sense, and I’m tired of not knowing what’s going on. I’m not going anywhere, or doing anything either of you says, until I get some answers!” Lureli planted her hands on her hips and waited.

Eleanor shot her a murderous glance and took a step toward her, but Aryelle laid a restraining hand on her arm. A look, and more, passed between the two of them.
Eleanor backed off, taking a deep breath to calm herself; why the mermaid brought out the worst in her she didn’t know, but for some reason she always did. “Well then, let’s get caught up so we can just get on with it, how’s that sound? You first, Little Miss Shellfish.”

Where can I purchase this fabulous series?
Amazon 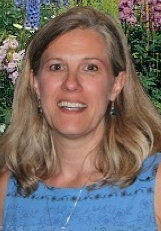 C. A. Morgan is not only an author/illustrator and armchair theorist, but an incredibly talented home chef who doesn't believe in the zombie apocalypse --- although she does hoard food in an amazingly well-stocked pantry. Equipped with a degree in Commercial Art from Michigan's Ferris State University, she has worked in a variety of related and teaching fields, and now calls Vermont's Northeast Kingdom home. She loves sharing rural life with her husband and their five exceptional children, seasonal livestock and occasional moose. Portraiture - both visual and literary - is her forte. She enjoys layering the aesthetic with functionality in her richly drawn fictional characters as much as in her "illuminated" art furniture. Encouraging others to develop their talents is her lifelong passion. Living out her dream, she hopes everyone reading this will take a chance, make a change, and work their butts off to make their own dreams come true!
Useful links
Amazon Author Page
Web site & Blog
Facebook