A slender arm that gripped a sword
rose slowly from the water.
"I'll save her" cried young Arthur.
"She must be some knight's daugter..."
"Be still," hissed Merlin. "There you see
the Lady of the Lake.
She's like a kind of mermaid.
That sword is yours to take."

My children loved the stories from Crazy Camelot when they were little. There is nothing like children stories in rhyme and the illustrations that are inside the book are fabulous. If you have young children and you want to introduce them to King Arthur and his knights then this is a fun way to do it.

Before I take the rest of this post to praise Crazy Camelot, I actually wanted to talk about a very famous lake in Arthurian legend.

There are two stories as to how Arthur came by his magical sword. Both will be familiar I am sure. The first one claims that Arthur pulled a sword from a stone. The other states that the sword was gifted to Arthur by the Lady of the Lake.

But where is the Lake?

Could Dozmary Pool be the lake in question??!

Dozmary Pool can be found in Cornwall, in the parish of Altarnun on Bodmin Moor. It is a Site of Special Scientific Interest and is within the Cornwall Area of Outstanding Natural Beauty - I can understand why. And from the picture above, it is easy to imagine a sword rising from the water.

Now, Excalibur came with instructions - not quite a 'how to use' manual - I am sure Arthur knew how to handle a sword. The instructions were simple. I shall quote from Crazy Camelot again, so prepare yourself for some more rhyme...


I am Excalibur, your sword,
and I will never break.
But when your reign is over,
return me to the lake. 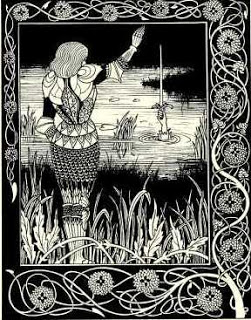 Dozmary Pool is bottomless and has a secret tunnel that leads directly to the ocean - a perfect home for the Lady of the Lake.
Back to the question is Dozmary Pool - that lake?

It is certainly atmospheric enough, but...

It isn't bottomless - in 1869 the pool dried up and apart from finding some amazing Neolithic arrowheads, there was no tunnel - so there goes that theory.

It is also argued that Dozmary Pool is too far away from the proposed site of the Battle of Camlann.

So the bottom line is that it is very unlikely that Dozmary Pool is that lake - but it is stunning.

Email ThisBlogThis!Share to TwitterShare to FacebookShare to Pinterest
Labels: #amreading #arthurain #romance #fantasy #hisfic, Arthur Pendragon. King Arthur and his Knights of the Round Table, Battle of Camlann, Sir Bedivere, The Lady of the Lake