Who was the real Sheriff of Nottingham? #RobinHood #Legends

“That's it then. Cancel the kitchen scraps for lepers and orphans,
no more merciful beheadings,
and call off Christmas…”
Robin Hood ~ Prince of Thieves (1991)

I know it has been a while since last I posted about Robin Hood, I was a little preoccupied with one or two things, you may have noticed?! But I haven't forgotten about Robin and his Merry Men.

Let's go 'riding through the glen' and find that elusive outlaw once again! 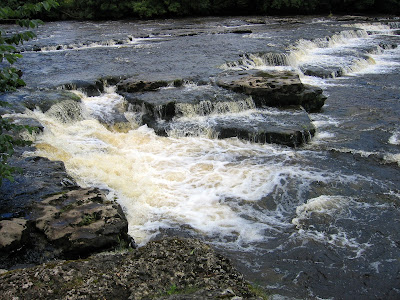 In keeping with the Robin Hood ~ Prince of Thieves theme of today's post...I know it has absolutely nothing to do with Sherwood forest, but hey, it is a pretty river!

The last time, if you recall, I was looking at the strange connection between Robin Hood, Richard the Lionheart, and Prince John. I concluded that it was a beautiful story, not a lot of factual evidence to go on, but hey, this is folklore we are dealing with, it is fair game to stretch the truth to gigantic proportions! And besides Mabel in the next village said it was true, then it must be —Right?!

I am going to ask you a question. Name Robin Hood's arch enemy — the one who gave him the most grief.

Yeah, you got it.

The Sheriff of Nottingham.

Let's remind ourselves of the very shaky evidence we have for Robin Hood. The strongest contender for the real Robin Hood was a criminal who went by the name of Robert Hood (or Hobbehod, as he became known).  Robert was running around causing mischief in 1225, by which time King John had already been dead for nine years — which means that all this time we have been looking at the wrong King.  It is John's son, Henry III, that we should have been taken notice of, not John and certainly not Richard.

There was a man in Henry's court who was not only a trusted advisor but also man of great integrity, and he just happened to be the Sheriff of Nottingham and Derby in 1225.

A man of integrity?  We all know The Sheriff of Nottingham in the times of Robin Hood, was one of the cruelest and greediest Sheriff of all times. Something isn’t right here and that is because we are not only looking at the wrong Sheriff but the wrong county.

Let me introduce you to Eustace of Lowdham.

Eustace was the Sheriff of Yorkshire in 1226.

‘It was Eustace who, as deputy-sheriff of Yorkshire, had to collect and account at the Michaelmas Exchequer of 1226 for the penalties imposed by Robert de Lexinton, who sat in judgement on Robert Hode, and for the sale of the chattels of felons and outlaws.'  Robin Hood ~ Holt

Yeah...I can see why he wouldn't have been very popular, but someone had to do it. Lucky old Eustace!

Okay, so we have a contender for Sheriff, but he is in the wrong county, or maybe we have put Robin in the wrong place. What if Robin didn't hide out in Sherwood at all, but instead...Barnsdale? Which, incidentally is where the evidence suggests he was.

Robin of Barnsdale and the Sherriff of Yorkshire.
I can't see that being a headline for a blockbuster movie, let alone a ballad.