I usually only review historical or mythological /paranormal books on this blog, but I have made the exception for this thriller because, not only is Lucinda E Clarke one of my favourite thriller authors, this book — this series — is one of those rare gems you stubble upon every now and then. I would happily shout that from the rooftops! 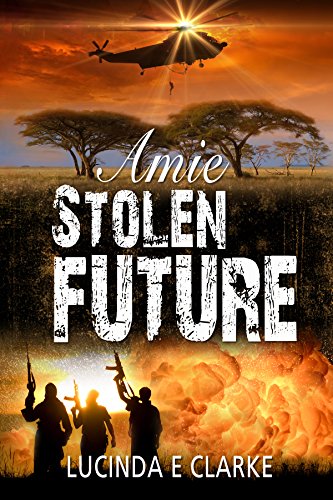 Amie returns to her beloved Africa and a settled life, but her enemies have neither forgiven nor forgotten her. They are determined to take their revenge and reclaim their honour. The events of one night change everything, leaving her with no home, no friends and no name; no future. Suddenly she no longer exists and those controlling her make it clear; she either obeys or she dies.

Stolen Future is the third book in the 'Amie' series - international multi award winning #1 bestsellers on both sides of the Atlantic. From naive, newly-married housewife, Amie faces challenges that change her beliefs and behaviour beyond all recognition.

A fast-paced action adventure, page turning read set in the wilds of Africa in the modern day.

What did I make of the book?
I was so excited to get my hands on Lucinda E Clarke's latest book. I am completely enchanted by Clarke's "Amie" series, and book 3 did not disappoint. But readers, be warned, once you start reading this book, you are not going to be able to put it down!
This book breathes Africa. I could even feel the heat of the sun, and smell the animals in the air. Amie Stolen Future is an exemplary example of suspense / thriller fiction. There was never a moment in this book where my attention wavered. It was just...ah, I can't find the words!!
As with the other books in this series, I loved Amie — she is such a strong ordinary woman who finds herself in the most extraordinary dangerous situations. She suffers heartache after heartache, but she will not be beaten. She is determined to live, despite the fact that there many people intent on killing her and those she loves.
Clarke has introduced some more characters to this page-riveting series, and I must admit I did fall a little for Simon ~ without giving the plot away, I think Amie made the right choice!
This book is definitely in the top 10 books I have read this year. Fantastic! I Highly Recommend.

About the author
Lucinda E Clarke [not her real name] was born in Dublin, but has lived in 8 other countries to date. She wanted to write but was railroaded into teaching. She had a habit of "falling" into other careers, announcing on radio, then scriptwriting for radio and television. She has been a professional writer since 1986 winning over 20 awards for her work, including mayoral speeches, company profiles, drama documentaries, educational programmes for radio and television, adverts, news inserts, court videos, National Geographic, cookery programmes, to name but a few!

She lectured in scriptwriting, had her own column in various publications, and written for national magazines. She was commissioned for two educational books by Heinemann and Macmillan, and book reports for UNESCO and UNICEF.

She graduated into running her own video production company in South Africa.
"Walking Over Eggshells" is her first self-published book, an autobiography which describes her adventurous life, trying to escape the emotional abuse she suffered from early childhood.

She published her second book a novel, "Amie an African Adventure" in July 2014, already a #1 bestseller in genre on Amazon.co.uk.

Lucinda's third book 'Truth, Lies and Propaganda', was published on Amazon on November 30th 2014. It is the first in a series of two books and 'More Truth, Lies and Propaganda' is due out in 2015. They follow the author's journey from the classroom to radio announcing, on to television and finally to setting up her own video production company. The books are packed with anecdotes of the often hilarious things that happened while out shooting a wide variety of subjects, taking the reader behind the scenes in the media and highlighting South Africa and its people.

The second book in the Amie series Amie and the Child of Africa was released in October 2015.