Please give a warm welcome to historical fiction author, Sarah Kennedy. Sarah is going to tell us about her inspiration behind her book…
The Altarpiece 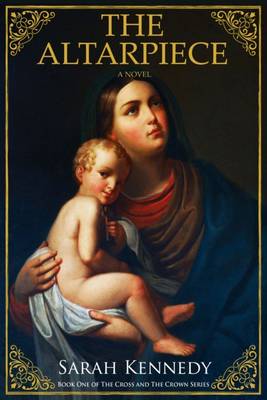 It is 1535, and in the tumultuous years of King Henry VIII’s break from Rome, the religious houses of England are being seized by force.  Twenty-year-old Catherine Havens is a foundling and the adopted daughter of the prioress of the Priory of Mount Grace in a small Yorkshire village.  Catherine, like her adoptive mother, has a gift for healing, and she is widely sought and admired for her knowledge.  Catherine’s hopes for a place at court have been dashed by the king’s divorce, and she has reluctantly taken the veil.  When the priory’s costly altarpiece goes missing, Catherine and her friend Ann Smith find themselves under increased suspicion.  King Henry VIII’s soldiers have not had their fill of destruction, and when they return to Mount Grace to destroy the priory, Catherin must choose between the sacred calling of her past and the man who may represent her country’s future.
***
Author’s Inspiration 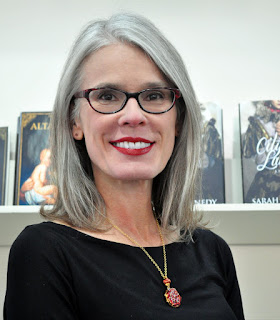 When I began writing The Altarpiece, my first novel, I didn’t really know what I was doing.  I was a writer already, but my work was all in poetry, not fiction.  I’d studied poems, read poems, taught poems.  I had noticed, however, that in working on my fifth book (I’ve published seven poetry collections), that the poems were becoming more narrative—and longer.  Instead of my early lyric, autobiographical work, the poems began to find their centers in historical figures, sometimes actual people from research and sometimes imagined characters.  When reading old manuscripts and letters, I heard the breath of the writers’ voices in my head, a true in-spiration in the etymological sense of the word, and the words emerged as dialogue.  My poems were becoming miniature stories.  What was happening?

I’ve never figured out the entire process by which I became a fiction writer (perhaps I simply got sick of myself!), but I do know that my interests evolved away from the short lyric and toward the sustained development of character.  It took a comment from a friend of mine, a member of my poetry-writing group, to make me see that novels were the way forward, to give me my immediate inspiration—though it took a while.  She said, upon reading a manuscript of poems, “You know, you really should write a historical novel.”  I laughed that off at the time—I couldn’t possibly write a novel!—but her words must have caught at something in my imagination.  It kept blowing through my mind, for sure.

As it happened, my teaching was also taking me into investigations of women’s lives.  My literary field is the Renaissance, but the Medieval period and the Long Eighteenth Century (beginning roughly with the Restoration of the English monarchy in 1660) had also long been interests of mine.  I travel quite a lot to the UK and try to get into the archives of personal documents and manuscripts (letters, diaries, recipe collections) to read first-hand what women said about themselves and their day-to-day tasks.  Happily, we also have two autobiographies from the Middle Ages by women, Julian of Norwich and Margery Kempe, which I have always loved reading and teaching.  I didn’t know this was going to happen, but one day my teaching and writing interests suddenly converged.

I’ve always loved reading novels:  historical novels, crime novels, contemporary character studies, even science fiction.  My husband and I were in a bookstore one afternoon, and I was browsing the new historical fiction.  That comment from my friend suddenly pulled harder.  I picked up a book and said, “I’m going to write one of these.”  I went home that night, opened the laptop, and started The Altarpiece.

One scene, that now comes early in the book, was my beginning:  a young novice standing in the porch of her church, peering down the road at the soldiers approaching.  She knows that Henry VIII has separated the English church from Rome.  She knows that they’re coming to close her convent and throw her out.  She has no idea what’s going to happen to her.  The convent has been her home for her entire life.  She has no money of her own.  The skills she has won’t be useable (for a woman) outside in the secular world.  She’s terrified and angry.  Her name is Catherine Havens.

Catherine is a fiction.  I created her out of documents I’ve read about the fates of nuns who were evicted from their convent homes under Henry VIII and Thomas Cromwell.  We actually don’t know all that much—though the research into these women’s lives is increasing.  Many of them fled to the Continent.  Some of them, who had wealthy families, returned to their birth homes.  Others?  Well, we just don’t know.  I wanted to give these women who’ve disappeared into the gap of absent history names, stories, and lives.

“Convent fiction” is not a new genre.  Writers and readers seem to have an abiding interest in the secret lives of nuns.  Sometimes, fictional nuns are quite holy and virtuous; other times, they are quite bad, especially if they’ve been forced into nunneries against their wills.  I wanted characters who are both, more like real people.  My nuns are people (or at least I hope they are).  Some of them are privileged and spoiled.  Some of them are devout.  Some are content to be in the convent.  Others resent it.  Most of them are not one-dimensional, even in terms of their faith.  They pray, but they fail to act as they should.  They love God, but they also love the world.

The Altarpiece was difficult to write, and I had to revise it many times.  But I had found in the writing a new genre, one that gave me the space and freedom to create and follow multiple characters, to watch them change and grow.  It gave me creative elbow room.

Will I go back to writing poems?  Maybe.  I still value the compression of poetic expression, the telescoping of idea into resonant language, that generates even more ideas.  I still love the heart-stab of a lyric that points directly to a life-altering moment of human experience, and I may feel the pull in the other direction some day.  I may want that kind of time-stopping event again.  For now, however,  writing for me is a narrative journey, filled with both joy and peril and never quite over, even when the book is done.

About the author
Sarah Kennedy is the author of the novels The Altarpiece, City of Ladies, and The King’s Sisters, Books One, Two, and Three of The Cross and the Crown series, and Self-Portrait, with Ghost, a stand-alone contemporary novel.  She has also published seven books of poems.  A professor of English in Virginia, Sarah Kennedy holds a PhD in Renaissance Literature and an MFA in Creative Writing.  She has received grants from both the National Endowment for the Arts and the Virginia Commission for the Arts.  Please visit Sarah at her website:  http://sarahkennedybooks.com