It is with the greatest of pleasure that I welcome back Larry Shackleford  onto the blog again! Larry is going to share with us his inspirations behind his latest book…
The Reliquary
By
Larry Shackleford 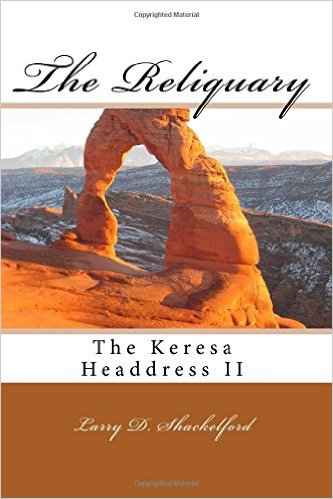 The Reliquary is the sequel to The Keresa Headdress. The fast-paced crime fiction novel takes place in Salt Lake City, Utah. The unique cast of characters from the Keresa Headdress are back, along with new team members, to solve another extraordinary criminal investigation involving fossil theft and a psychotic killer.
FBI Special Agent Karen Adams' career has flat lined since the exciting Keresa Headdress investigation, where she met Special Agent Marcus "Playboy" McCoy and her fiancé, archaeologist Derek Simms.  Karen's supervisor, Roger Miller has since reassigned her to investigating mundane medical waste, fraud and abuse cases. Karen and Marcus are reunited as unlikely partners when a paleontology team goes missing in the remote Morrison Formation near Richfield, Utah.
The missing persons case quickly escalates into a chilling nightmare that no-one could have expected. Karen and Marcus soon discover the murdered scientists along with missing Allosaurus fossils. The violent killer leaves few leads to pursue, and the team enlists Riley, a local polygamist and nudist, along with heavyset homicide detective, Colin Childs, to assist with the investigation.  Marcus continues his “Playboy McCoy” antics until he meets Dr. Lisa Gruber, a paleontologist from the University of Utah who is unlike any woman he has ever met.
Dealing with recent personal issues, Karen finds herself in another professional frustrating situation. Unfortunately, she must risk her own life as another case submerges her into the unimaginable underworld of antiquities theft and the criminally insane.
Author’s Inspiration
First of all, it is an honor and a privilege to be invited back to Mary Anne’s blog site!  I have been a longtime fan of Mary Anne’s books; my friends and co-workers have all thoroughly enjoyed her Du LacChronicles series.
The inspiration behind The Reliquary, the sequel to The Keresa Headdress (2015), was directly related to my interest in paleontology and the fascinating world of dinosaurs.  During my law enforcement career, I had the opportunity to work on several investigations involving the theft of Allosaurus fossils on public land in the State of Utah.  I even traveled to two different foreign countries to recover stolen fossils.  Utah’s unique geology makes for world-class paleontology sites spanning millions of years of evolution.  The Allosaurus was named the official Utah State fossil in 1988 because there are more Allosaurus fossils in Utah than anywhere else in the world. 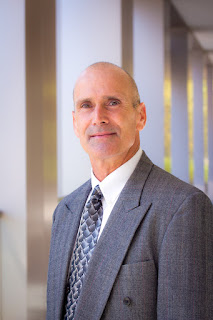 Larry was raised in southwest Missouri where he received his college degree, but he received his education after he graduated and began working in a maximum-security federal prison. After spending two years behind bars, he continued his law enforcement career as a criminal investigator, residing and working in eight states and two foreign countries. Larry retired from law enforcement after twenty-five years of service and resides in Salt Lake City with his wife and cat.
Posted by Mary Anne Yarde at 08:00