What did a War Time Christmas Look Like? #WW2 @Suzy_Henderson

A Wartime Christmas
by Suzy Henderson 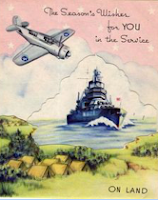 When I began writing The Beauty Shop, I decided that my male and female protagonist would meet at a New Year’s Eve dance held at an air base. The year was 1942, and it was the first Christmas the Americans would spend in England. While I’d read about service dances and budding romances, it seemed the war years were joyful and exciting, but I feel that was perhaps just a little light that shone through the ever-constant darkness. So, I went back in time, back to the 1940s, in search of a wartime Christmas.

December 1940 was a challenging month, and the first year the British people had to endure heavy bombings in some parts while preparing to celebrate Christmas. The Blitz had begun on September 7th, 1940, and by the end of the year, 24,000 people had been killed while hundreds of thousands became homeless. The Luftwaffe virtually destroyed the city centre of Coventry in November, while around 41,000 British Soldiers were captured on the continent. Many women now worked, children had been evacuated, and families split up. As many people mourned the loss of loved ones, many more feared for their fighting men, and for those displaced and homeless, Christmas must have seemed a very bleak prospect indeed.

Manchester suffered quite heavily between the 22 -24 December as the Luftwaffe launched bombing raids on industrial targets. One side of Manchester Piccadilly was virtually destroyed during the second night of attacks, with buildings set ablaze. Incendiary bombs caused hundreds of fires over two consecutive nights. Christmas and homes would have been destroyed for a number of people, along with the loss of lives. Fortunately, Britain and Germany made an unofficial agreement to refrain from any further bombing raids until the 27th December, an agreement that did not extend to ground or sea forces. 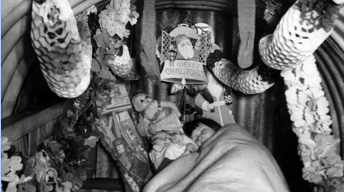 Small Christmas trees were in great demand as many families prepared to spend the day in their air raid shelters, in case the Luftwaffe should come again. Paper chains were made from scraps of paper, glued together and strung across rooms or shelters for decorations. The ration was beginning to bite, and many items including food and gifts were in short supply. The government discouraged the public from spending money on gifts and encouraged them to buy war bonds instead, to help the war effort. In doing so, they managed to raise around £10 million one week before Christmas. 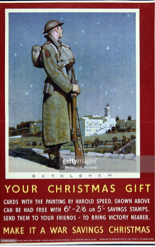 “Make do and Mend” was the official slogan used prolifically throughout the war years. Everything that could be recycled was, including brown paper and string, which was so scarce and used over and over on parcels. Hand-made presents were the order of the day, including boats, trains and doll’s house furniture carved from wood while women made knitted items such as dolls, hats, and scarves from any spare wool they could find. Gifts were also generously donated by other countries and charities.

Christmas dinner was an ingenious affair. Turkey was simply unaffordable to the masses and many other cuts of meat, although cheaper, were still expensive. Many working class people turned to home-reared chickens and rabbits. The latter often became cherished family pets of children who would undoubtedly be upset to see them served up at Christmas. By now many people were growing their own vegetables and making chutney which would be a blessing for the dinner table at this time. Fruit was scarce, and there were very few imports, so Christmas cakes and puddings were made with substituted ingredients in place of dried fruit and marzipan as people became more resourceful in the kitchen.

While many people made the traditional visit to church that day, there was a distinct silence in the air as all bell ringing was banned, reserved only to signal the German invasion. The BBC broadcast a Christmas service from the ruins of Coventry Cathedral, and the Kings speech went ahead as usual via a radio broadcast. Most families would be sat huddled around the radio, listening intently at 3pm to King George VI as he addressed the nation. His speeches at this time throughout the war years became so popular with the people that they continue to this day. The entertainment of choice would be cards, singing songs, carols and listening to the radio.

On Sunday 29th December, the Luftwaffe returned with a vengeance, launching one of the heaviest raids of the Blitz so far, with fires that raged so ferociously it became known as the Second Great Fire of London. The city was burning, and one of the most powerful images of the entire war was taken that night of St Paul’s Cathedral; the dome of which rose untouched as flames danced all around. It was hailed as a miracle by the people, and St Pauls became a symbol of the will of the British, rising triumphant from the ashes. They would not be defeated, and they would not give in.

By December 1942, the Americans had joined the war, and the British people were asked to welcome a GI into their home at Christmas time. Many did, and forged friendships with those young men who were so far away from home. And of course, the GIs always took along their individual rations which were always gratefully received and helped deliver a little extra festive cheer. 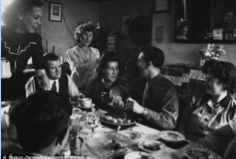 So, the British people demonstrated their indomitable spirits by smiling through the harshness and tragedy of war, determined that Hitler would not break them. They enjoyed the festivities as well as they could, making an effort for the sake of their children. They extended the hand of friendship to our American neighbours, ensuring that they too enjoyed this day in the company of others, with families to show them they were not alone. The true spirit of Christmas, generosity, compassion and friendship.

Today, we are far more fortunate, and I have no experience of the hardships the people faced back then, something I am most grateful for. Christmas is a time of peace, and of friendship, love, and extending hospitality to those less fortunate than ourselves. It is a time of giving, and we can all give so much to others, so much of ourselves, including our time – it’s not necessarily about buying presents. And remember, no one should be alone at this time unless they wish to be. 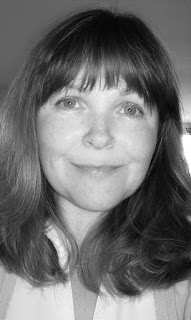 That was the beginning of a new life journey, rekindling her love of writing and passion for history. With an obsession for military and aviation history, she began to write.
It was an old black and white photograph of her grandmother that caught Suzy’s imagination many years ago. Her grandmother died in 1980 as did her tales of war as she never spoke of those times. When she decided to research her grandmother’s war service in the WAAF, things spiralled from there. Stories came to light, little-known stories and tragedies and it is such discoveries that inform her writing.
Having relocated to the wilds of North Cumbria, she has the Pennines in sight and finally feels at home. Suzy is a member of the Historical Novel Society and the Romantic Novelists Association. "The Beauty Shop" is her debut novel and is available here...  Amazon
Useful Links
http://www.suzyhendersonauthor.com/
suzyhenderson.wordpress.com
http://lowfellwritersplace.blogspot.co.uk/
https://www.goodreads.com/author/show/15954239.Suzy_Henderson
https://www.facebook.com/SuzyHendersonAuthor/
https://twitter.com/Suzy_Henderson
https://plus.google.com/u/0/109057622139171622985
https://uk.linkedin.com/in/suzy-henderson-714a4353