What was Christmas like during the reign of the Tudors? @tonyriches

Tudor Christmas
by Tony Riches, Author of The Tudor Trilogy 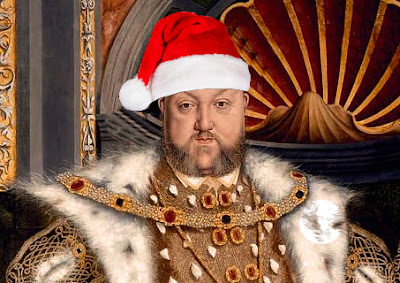 The Tudor Christmas was a time of religious fasting and prayer, particularly on Christmas Eve, when no meat, eggs or cheese were allowed.  People shared 'minced pyes' made with thirteen ingredients to representing Christ and his apostles. These usually included dried fruits and spices, with chopped mutton as a tribute to the shepherds of the Nativity.
Henry VIII was one of the first to eat turkey at Christmas. He liked it stuffed with a goose stuffed with a chicken stuffed with a partridge stuffed with a pigeon—served with side orders or small birds and wild fowl!
Tudors kings and queens also ate swan, venison, peacock and wild boar, which was often a centrepiece, with its tusks gilded. Queen Elizabeth I decreed everyone should eat goose for Christmas, in honour of English sailors who saw off the Spanish invaders. (Unfortunately, few could afford a goose.)
Tudor commoners liked to drink ‘Wassail’ at Christmas, a wooden bowl of punch made from boiled ale, sweetened with sugar and spices. When shared with friends and neighbours, a crust of bread left in the Wassail bowl was presented to the most important person in the room – the origin of proposing a ‘toast’ when drinking in company.
The Tudors gave each other presents on New Year’s Day. Important people of the Tudor Court would offer the king a New Year gift and have one in return. King Henry VII kept a list of all his gifts, a tradition which lasted for two generations. The women of King Henry VIII's court gave him shirts they had embroidered.
A ‘Lord of Misrule’ was often chosen at Christmas and ruled the festivities until Epiphany. King Henry VII encouraged his court to enjoy turning the usual order on its head, and even allowed a ‘Bishop of Misrule’ to mock the church. This was banned in 1541 to prevent mocking the new head of the church – King Henry VIII. 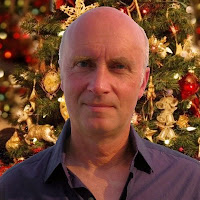 Tony Riches is a full time author of best-selling historical fiction and non-fiction books. His latest novel, JASPER – Book Two of The Tudor Trilogy, can be found on Amazon UK  Amazon US and Amazon AU. For more information about Tony’s other books please visit his popular blog, The Writing Desk and his WordPress website and find him on Facebook and Twitter @tonyriches.