It is with the greatest of pleasure that I welcome Historical Fiction author, Paul Bennett onto the blog to talk about his inspirations behind his latest book… 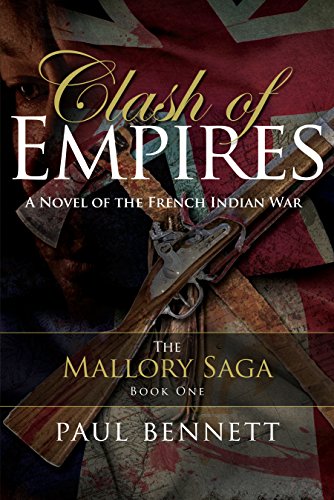 In 1756, Britain and France are on a collision course for control of the North American continent that will turn into what can be described as the 1st world war, known as The Seven Year’s War in Europe and The French and Indian War in the colonies. The Mallory family uproots from eastern PA and moves to the western frontier and find themselves in the middle of the war. It is the story of three siblings, Daniel, Liam and Liza and their involvement in the conflict and the emotional trauma they endure. The story focuses on historical events, such as, the two expeditions to seize Fort Duquesne from the French and the fighting around Forts Carillon and William Henry and includes the historical characters George Washington, Generals Braddock, Forbes and Amherst. The book also includes the event known as Pontiac’s Rebellion in which the protagonists play important roles. Clash of Empires is an exciting look at the precursor to the events of July 1776; events that will be chronicled in the second book as I follow the exploits and fate of the Mallory clan.
“Clash of Empires swept me along into a brutal frontier war of honor and vengeance…”  Rob Hagar Bayliss – author of The Sun Shard and The Dead Gods
“Bennett shows understanding and sympathy for a disappearing world in this tale of war-torn frontier America…” SJA Turney – author of the Marius Mules series, The Ottoman Cycle and Tales of the Empire

“A storming triumph – war, love, honor, betrayal and loss, Clash of Empires has it all”! C.R. May – author of Sorrow Hill, Nemesis and Fire & Steel

Author’s Inspiration
The inspiration to write was, in the beginning, merely to see if I could do it.  I had written short pieces over the years but to tackle a full blown novel was a daunting prospect.  Once the seed was planted I came up with a rough idea of telling the story of three siblings living somewhere in colonial America.  Choosing that general locale was a natural fit for me as I’ve been a lifelong student of American history and I felt that if I was going to write a historical fiction novel, it might be prudent to choose a subject I knew a little about. I picked The French and Indian War as the starting point for what was now becoming a possible series of books that would follow the Mallory clan through the years.  That war intrigued me and I saw a chance to tell the story through the eyes of the Mallory family.  It also provided me with the opportunity to tell the plight of the Native Americans caught up in this conflict.  The French and Indian War paved the way for the colonies to push further west into the Ohio River area.  It also set the stage for the events of the 1770’s.  Britain incurred a huge debt winning that war and looked to the colonies for reimbursement in the form of new taxes and tariffs.  Well, we all know how those ungrateful colonists responded.
An inspiration for the last couple of chapters in Clash came about because I grew up in Detroit, MI. the site of Pontiac’s Rebellion.  When France lost, the tribes that sided with them found themselves under the thumb of the British, a situation that became intolerable due to the harsh methods of Jeffrey Amherst.  A coalition of tribes arose under the Ottawa chief Pontiac so even though the war was over, conflict continued.  That was too good a setting to ignore so I made sure my protagonists were part of the action.
As to the name Mallory – I have a photo hanging on my living room wall of my great grandfather, Harry Mallory.  I got to know him when I was a young boy and was always glad when we visited him.  He lived a good portion of his life in western Pennsylvania which is where much of Clash of Empires takes place.  So, as a gesture to my forebears, Mallory became the name of the family.
Now that Clash is complete I am at work on the second book in the series, Sundering of Empire – Dissension.  This one will cover the years 1767-1776.  The third book will cover the war years and the making of a government.  I’m also working on a set of three short stories; one each for the three siblings that give a little more insight into their characters.  The stories are interconnected and cover the 3 days following Liza and Henry’s wedding.
A word of thanks for encouraging me to do the deed must go out to the many friends I have come to know via the Net; among them, but certainly not all, Simon Turney, Martin Lake and Gordon Doherty were unbelievably helpful in the creation of Clash.  Also, I cannot thank my editor, Marguerite Walker II, enough for her hard work in making me a better writer.

Paul’s education was of the public variety and when he reached Junior High he discovered that his future did not include the fields of mathematics or science.  This was generally the case throughout his years in school as he focused more on his interest in history; not just the rote version of names and dates but the causes.
Paul studied Classical Civilization at Wayne State University with a smattering of Physical Anthropology thrown in for good measure.  Logically, of course, Paul spent the next four decades drawing upon that vast store of knowledge working in large, multi-platform data centers, and is considered in the industry as a bona fide IBM Mainframe dinosaur heading for extinction.
Paul currently resides in the quaint New England town of Salem, Massachusetts with his wife, Daryl.  The three children have all grown, in the process turning Paul’s beard gray, and have now provided four grandchildren; the author is now going bald.