Celebrating 35 years of
Robin of Sherwood. 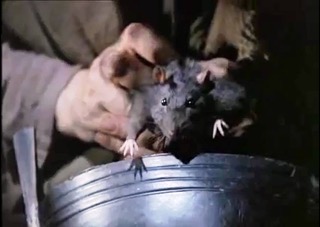 One of the most beloved characters in Robin of Sherwood was not Robin or his band of merry men, in fact, he wasn’t even human. Arthur was the adorable dungeon rat and today he has taken time out of his very busy schedule to chat to us.

Hello Arthur, it is so lovely you could join us today!

Charmed, I am sure!

When I think of Robin of Sherwood your character always springs to mind. How did the role come to your attention?

I was minding my business on the set one day and there was some food out in one of the early episodes, well I couldn't resist!  So, I took a shot at the food but sadly found it was that Styrofoam stuff you know?  It was 'all' fake?  Everything, even the deer Robin carries on his shoulder when suddenly this guy from wardrobe picked me up and asked me if I wanted to do a one-off episode.

Well, I jumped at the chance!  Throughout my whole life, I had been mingling in theatres with the acting classes having attended RADA, etc.  Oh yes, I was at RADA…  Impressed aren't you darling?

I'd been in theatre for a long time, just behind the scenes and I thought it was my opportunity to get some really class acting in.

I was introduced to Stuart Linden, and we had a very good working relationship.  I was supposed to do a run on part initially, just across the set but Stuart and I thought it a good idea that we had a bond in the series and he had me as his pet and carried me around.  So, he often made comments about me and to me, which brought out and enabled him to develop his fabulous character of this, old, off his head geezer in a dungeon. I can tell you though, seriously, it wasn't him carrying me, I carried him, you know, I really did darling!

If it weren't for me, his lines would have meant nothing. I think he bounced his lines off against me and I carried the puns you know?  I was supposed to have a speaking role and only be in the first episode, but they loved me and kept me on even though I didn't get many lines, just the odd squeak here and there.

How much influence did you have on your character's role in Robin of Sherwood and indeed, the series as a whole?

Well, firstly I think the old prisoner was invented as a means to get out of a writing problem.  They had to get the 'Merries' out of prison in one particular episode, and because they were in a kind of dungeon pit, there were no ladders see.  So, they had to stand on each other's shoulders, and the old prisoner was the bottom rung on the human ladder, and they got out by standing on him.  However, Stu as I called him and I become fond favourites by Kip Carpenter and despite the ladies, not taking to me, you know me being all ratty and such, he kept us both on. Personally, I think we were the success of the whole series, to be honest, I mean I know the others can act, but they couldn't squeak like I could, so who else could do that part? 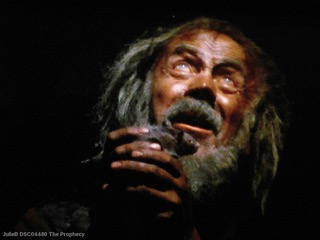 Plus, Stuart was just referred to as "the old prisoner"!  I had a name!  Arthur! Though he could never say it correctly, he had a common tone and used to use an f, rather than an eloquent th, but, then I supposed he was playing a role, but 'Arfur,' ohh dear, so common.

ArTHUR dear! It's ArTHUR! I kept telling him.

I am sure everyone wants to know — did you ever get out of the dungeon?

No, I did not! and do you know I was rather frustrated at that?  I could have really honed my skills but when the old goat DID get out, his line “he wanted to get back to Arfur”, meant he’d left me in the pit!  Had he not have thought to take me with him? A bit of sunlight for me perhaps?  Come on we could have asked Kip to write that one in Stuart!!!  I think he was a little annoyed I had all the limelight in our scenes.

How many episodes were you in?

I was in five or six, I did well in the series, the donkey only got a couple I think and those darn pigs, Oh God, and they made so much noise and so much trouble.  All they had to do was be caught?  What did they do?  Led the Merries a right Royal dance I can tell you!   Sigh, see, they were not drama trained like me so what can you expect and they got them from a local farm, they were not on Spotlight. 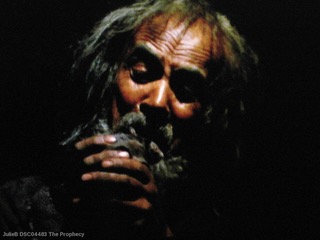 Anyway back to me darling, yes I was on five episodes maybe six?  The Sheriff of Nottingham, The Power of Albion, The prophecy, The Witch of Elsdon and Robin Hood and the Sorcerer, across all three seasons; it’s 35 years ago dear and I’ve played in more things since then.

How long were you meant to be in the dungeon for?

Well, Stuart in character tells De Rainault he has been in the dungeon I think 27 years! But who knows? To be fair De Rainault doesn’t refute him or anything, so I it could be true!  He was rather beardy and decrepit looking. 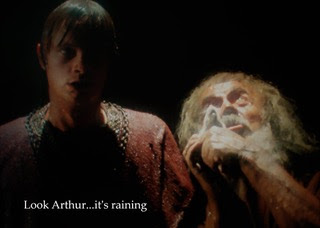 It was quiet moving and I acted my socks off dear to show it, I can tell you, in the bits that showed the Old Prisoner refused to flee and not part with me.  I remember his classic line of “the only way out is feet first” “Feet first Arfur”, he used to say, must have heard that 100 times in rehearsal.

What it meant of course was the only way he’d get out the dungeon was if he was dead and that was the ‘only’ way to get out. However, rats are clever and I’d already discussed with Esta Charkham that if the Old Prisoner did die, I would be able to continue working on the series in a minor role so my future was pretty safe.

Did you get any perks?

They did want to pay me in cheese but, I ask you?  Rats cannot live on cheese alone, so I actually managed to get a living wage AND the cheese, so I guess that was a perk, but I never really socialised with the cast after but, Michael Praed and I got on fabulously and we often spent many an evening after work at his place so friendship was a perk.

Did you have to have special training for the part?

Darling, I’m an Actor!  I had already had previous training in biting, singing and Mouseical arts and I can say my name backwards and forwards in Greek, Arabic and German.  So obviously my talents where recognised for the show.

What is your favourite episode?

It has to be the one where Robin was killed.  I remember it well, the cast had read the script and everyone lost their appetites at this sudden news that Michael was leaving, so I got in there and finished off their lunches. A very good episode for me.

What do you think of the new Robin of Sherwood Audios?

Well, they are very good, but I’m not in them.  I think I would be good at audio.

Have you managed to act in many other things since Robin of Sherwood?

I had a voice over part in Ratatouille in 2007 but you can’t see ‘ME’ as an actor playing a part, as it was just my voice.

And I had a walk on part in the Nun’s scene in the latest “Good Omens”, but the set was very dark but if you look you can see me. I shall be also doing comic-cons very soon.

Thank you so much Arfur, sorry, I mean Arthur, for this delightful interview

A pleasure darling, and if you know of any good parts, here is my card; oh, sorry, I’ve nibbled the end of that one.