The Traitor of Treasure Island
By John Drake 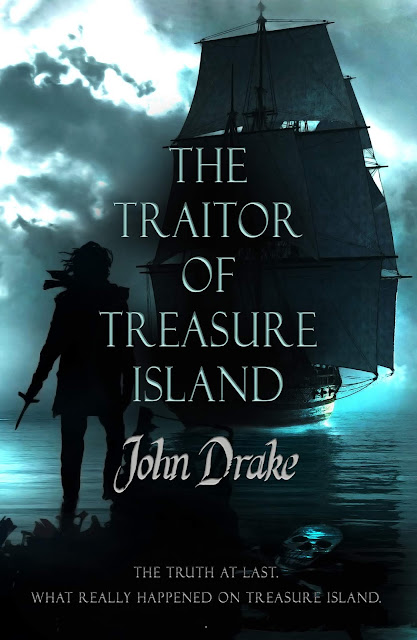 Buried for over 300 years and now brought triumphantly to light by Dr Livesay, this is, at last, the true story of what happened on the fateful Treasure Island…

The truth about Captain Flint and his fabled death.

The truth about Long John Silver and his coveted wife.

And the truth about Jim Hawkins, that double-dealing turncoat of the first order: The traitor of Treasure Island.

‘Aye-aye!’ he replied, and faced the shivering door with a pistol in one hand and a cutlass in the other, as I gave Mrs Charlotte a pistol and tried to give one to Jim Hawkins. But he just shook his head, even when one of the little serving girls spoke.

‘Be careful, Doctor,’ she said, ‘be careful, my dear man.’ And this time I had no strength left to resist, so I kissed her on the lips not caring who might see.

‘Charlotte!’ I said, and I was hers and she was mine for ever… provided only that we survived the night.

So up the stairs at the run, fumbling in the dark for the front bedroom, and there lay Jamie Woolacombe in his brother’s arms, shot twice and ugly through the head, and gone beyond aid. But I had brought the blunderbuss and a pistol, and, keeping my head well down, I crept to the window and fired one of Monsieur Brudatour’s weapons at the stars. This produced the expected volley from the enemy outside, after which I stood up and gave fire from the blunderbuss with a dozen pistol balls over four drachms of black powder. I aimed where I guessed our enemies stood; the weapon thundered and kicked, the flash lit the night, scraps of wadding smouldered and fell, and men groaned and shrieked.

So they paid dear for Jamie Woolacombe.

But again, the strong, clear voice sounded, and as I ran downstairs again I heard the front door being smashed in, and men roaring and bellowing and firing pistols into the woodwork to break the door still further, which indeed they were doing, as nails yielded and timber groaned, while vigorous arms could be seen through the gaping planks, swinging hammers in the moonlight.

‘Charlotte!’ I cried, ‘Get into the tap-room with the girls!’
‘Take care, David!’ she said, and she fell back, as did the boy Jim: miserable wretch that he was, he took no part in the fight.
‘Stand by, Mr Bones!’ I said.

‘Aye-aye!’ he said. Then, since I had not asked before:

‘Who are they, Mr Bones? What do they want?’

‘Flint,’ he said, and no more words were possible, as the door fell down in shards and wreckage, and Billy Bones and I fired our pistols, and a fusillade came from outside, and Billy Bones was stumbling, and men were falling, and there came a great rushing of bodies over the ruined planks, and Billy Bones roared like a lion and laid on left and right with his cutlass, and I struck out with the fireside poker for want of anything better.

So it was Hell and Bedlam, and while I did my best, it was only the huge and furious Billy Bones that saved us. It was him, together with three shots fired, close-range at our enemies, in the wavering moment when either side might have prevailed: a charge of goose-shot from Ernest Woolacombe, come downstairs with his gun, and two rounds from Charlotte who would not cower in safety, but stood forth with the pistols I’d given her and the serving girl.

Then the enemy screamed and fled, and Billy Bones was out into the night, swinging one final and enormous blow that would have cleaved his victim from scalp to collar-bone, except that the cutlass thumped into the swinging sign of the Admiral Benbow, leaving a notch that survives — with great fame and reputation — even to this very day.

John Drake trained as a biochemist to post-doctorate research level before realizing he was no good at science. His working career was in the television department of ICI until 1999 when he became a full-time writer. John's hobby is muzzle-loading shooting, and his interests are British history and British politics (as a spectator), plus newspapers, TV news, and current affairs. He is married with a son and two grandchildren.