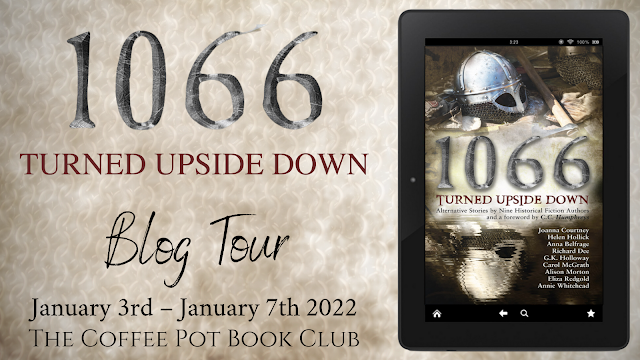 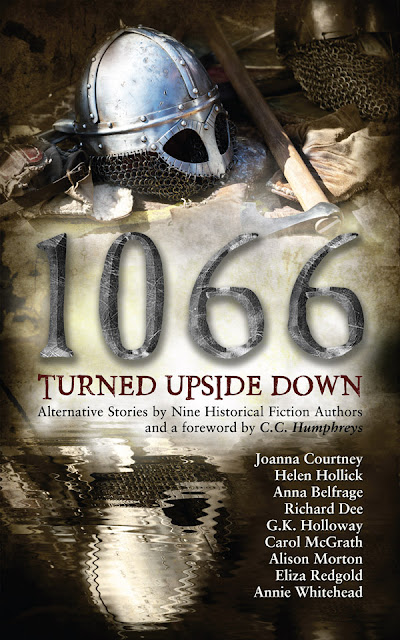 Publication Date: 14th September 2021
Publisher: Taw River Press (paperback) Matador/Troubador (e-book)
Page Length: 222 Pages
Genre: Alternative History
Have you ever wondered what might have happened if William the Conqueror had been beaten at Hastings in 1066? Or if Harald Hardrada had won at Stamford Bridge? Or if Edward the Confessor had died with an heir ready to take his crown? If so – here is the perfect set of short stories for you.
1066 Turned Upside Down explores a variety of ways in which that momentous year could have played out very differently.
Written by nine well-known authors the stories will take you on a journey through the speculative ‘what ifs?’ of England’s most famous year in history.

Emperor Of The North
by Joanna Courtney
Harald Hardrada, renowned Viking warrior and King of Norway, had two important ‘right-hand men’ – Lords Halldor and Ulf. They seem to have been with him from his early years as a Varangian mercenary and were a key part of his stable rule of Norway from 1047. Halldor returned to his homeland of Iceland in 1051, but Ulf remained as Harald’s High Commander until he died in early 1066, just before the invasion of England.
Was it, I wondered, the lack of this level-headed commander that led to Harald making what must be one of the only tactical mistakes of his prestigious military career in turning up at Stamford Bridge with only half his army, and they not in full armour? This story, told by Aksel, imaginary son of Lord Halldor, explores that possibility and the effect it might have had on England if Norwegian Harald had defeated English Harold in 1066.
It was a fine year, 1066 – a year to be sung to the rafters of the mead halls, a year to hail the crowning of a mighty king: Harald Hardrada, Emperor of the North. Not that I ever doubted he would do it. None of us did.
Harald had been a king long before 1066 and a fine one. They didn’t call him Hardrada – Ruthless – for nothing. He’d won Norway in 1047 and held her for nigh-on twenty years before he challenged for England. I should know, for I was born in his war camp, son to his trusted friend Lord Halldor of Myvatyn, and was passed to Harald for luck as soon as my cord was cut. I followed him from that moment.
Let me introduce myself – Aksel Halldorson, Earl of Wessex and Commander of the King’s troops either side of the Narrow Sea, though I am little use in that office these days, being more or less confined to my bed since the summertime of this year of our Lord, 1086. I am but two and fifty – almost the age Harald was in 1066 – but I have some disease that is wasting away my bones.
‘They said we were mad!’ That’s how my father used to tell the events of 1066. ‘They said we could never take England, that she would be too strong for us – but we sailed on her anyway.’
He was always one for the drama in a tale, Lord Halldor, and he liked to make out the expedition was harder than it was, but in truth no one said that we were mad – they just said, ‘show us the path’. Vikings, even these days, are ever keen to take to the whale road and men were summoning their crews the moment Edward died and Harald spoke of England. We were wild enough to yearn for battle and arrogant enough to believe we could seize England, the jewel in Europe’s crown – a land so sure of itself that all men longed to hold it. Earl Harold longed, for sure, Duke William too, but God did not choose them. God chose Harald Hardrada of Norway and Harald has paid Him back with twenty years of security and prosperity for his people.
So how, in this alternative story did Hardrada win at Stamford Bridge? Read 1066 Turned Upside Down and find out! 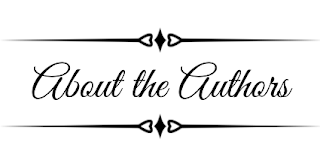 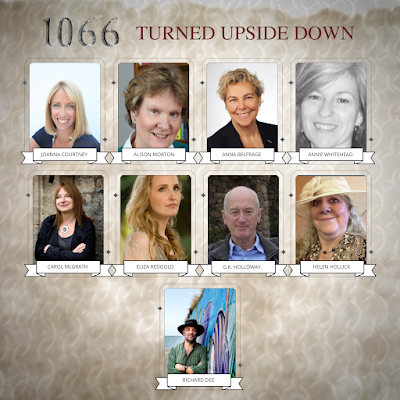 1066 Turned Upside Down is a collection of eleven alternative history short stories of a ‘what if’ nature imagined by nine well-known successful authors:

JOANNA COURTNEY Ever since Joanna sat up in her cot with a book, she’d wanted to be a writer and cut her publication teeth on short stories and serials for the women’s magazines before signing to PanMacmillan in 2014 for her three-book series The Queens of the Conquest about the wives of the men fighting to be King of England in 1066. Her second series, written for Piatkus is Shakespeare’s Queens exploring the real history of three of the bard’s greatest female characters – Lady Macbeth, Ophelia and Cordelia.

Joanna’s fascination with historical writing is in finding the similarities between us and them –with an especial goal to provide a female take on some of the greatest stories we think we know. www.joannacourtney.com

ALISON MORTON writes the award-winning alternative fiction Roma Nova thriller series featuring tough, but compassionate heroines. She blends her deep love of Roman history with six years’ military service and a life of reading crime, historical, adventure and thriller fiction. A ‘Roman nut’ since age 11, she started wondering what a modern Roman society would be like if run by strong women. She has recently branched out into a contemporary crime setting with Double Identity, the first of a planned series.

ANNA BELFRAGE Had Anna been allowed to choose, she’d have become a time-traveller. As this was impossible, Anna has authored the acclaimed time travelling series The Graham Saga, set in 17th century Scotland and Maryland, as well as the equally acclaimed medieval series The King’s Greatest Enemy set in 14th century England. Anna has also published The Wanderer, a fast-paced contemporary romantic suspense trilogy with paranormal and time-slip ingredients. His Castilian Hawk - returning to medieval times and her most recent release, The Whirlpools of Time, a time travel romance set against the backdrop of brewing rebellion in the Scottish highlands. Anna has won several awards including various Gold, Silver and Bronze Coffee Pot Book Club awards. www.annabelfrage.com

ANNIE WHITEHEAD is an historian and prize-winning author. Her main interest in history is the period formerly known as the ‘Dark Ages’. Her first novel, To Be A Queen, is the story of Aethelflaed (daughter of Alfred the Great), who came to be known as the Lady of the Mercians. Alvar the Kingmaker, tells the story of Aelfhere of Mercia, a nobleman in the time of King Edgar. Cometh the Hour goes further back in time to the seventh century, to tell the story of Penda, the last pagan king of Mercia. Annie has twice been a prizewinner in the Mail on Sunday Novel Writing competition, she won first prize for nonfiction in the new Writing Magazine Poetry and Prose competition, and was the inaugural winner of the HWA (Historical Writers’ Association)/Dorothy Dunnett Society Short Story Competition and is now a judge for that same competition.

Annie has had two nonfiction books published. Mercia: The Rise and Fall of a Kingdom (Amberley Books) has been an Amazon #1 Bestseller. Women of Power in Anglo-Saxon England was published by Pen & Sword Books in 2020.

CAROL McGRATH is the author of The Daughters of Hastings Trilogy. Her fifth historical novel, The Silken Rose, first in The Rose Trilogy, published by the Headline Group, is set during the High Middle Ages. It features Ailenor of Provence and was published in 2020. The Damask Rose about Eleanor of Castile was published in 2021. The Stone Rose, Isabella of France, follows in 2022. Carol has also written Historical Non-Fiction for Pen & Sword.

ELIZA REDGOLD is an author and ‘romantic academic’. Her bestselling historical fiction includes her Ladies of Legend trilogy, starting with Naked: A Novel of Lady Godiva released internationally by St Martin’s Press, New York. Her historical romances are published by Harlequin Historical, London (Harper Collins). They include Playing the Duke’s Mistress, Enticing Benedict Cole, The Scandalous Suffragette and The Master’s New Governess. They have been translated into multiple languages including Italian, Polish, Czech, Danish and Swedish, and are available internationally.

G.K. HOLLOWAY After graduating from Coventry University with an honours degree in history and politics, he worked in education in and around Bristol, England, where he now lives. After reading a biography about Harold Godwinson, he studied the late Anglo-Saxon era in detail. When he had enough material to weave together facts and fiction he produced his novel. 1066 What Fates Impose, a story of family feuds, court intrigues, assassinations, plotting and scheming, loyalty and love, all ingredients in an epic struggle for the English crown. www.gkholloway.co.uk

HELEN HOLLICK moved from London in 2013 and now lives on a thirteen-acre farm in North Devon, England. Born in London, Helen wrote pony stories as a teenager, moved to science fiction and fantasy, and then discovered the wonder of historical fiction. Published since 1994 with her Arthurian Pendragon’s Banner Trilogy, followed by her 1066 era duo. She became a USA Today bestseller with her story of Queen Emma: The Forever Queen (titled A Hollow Crown in the UK), and its companion novel, Harold the King (titled I Am the Chosen King in the U.S.A). She also writes the Sea Witch Voyages, a series of pirate-based nautical adventures with a touch of fantasy. Commissioned by Amberley Press she wrote a non-fiction book about pirates in fact, fantasy and fiction and a non-fiction book about smugglers, published by Pen and Sword.

Recently she has ventured into the ‘Cosy Mystery’ genre with her Jan Christopher Mysteries, the first of which is A Mirror Murder. She runs Discovering Diamonds, an independent online review site for Historical Fiction, primarily aimed at showcasing Indie writers.

She occasionally gets time to write. www.helenhollick.net

RICHARD DEE was a Master Mariner and ship’s pilot, now living in Brixham, South Devon.  His novels include Science Fiction and Steampunk adventures,  as well as the exploits of Andorra Pett, a reluctant amateur detective. www.richarddeescifi.co.uk 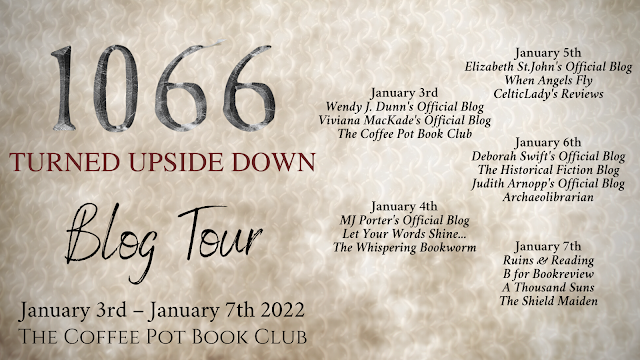