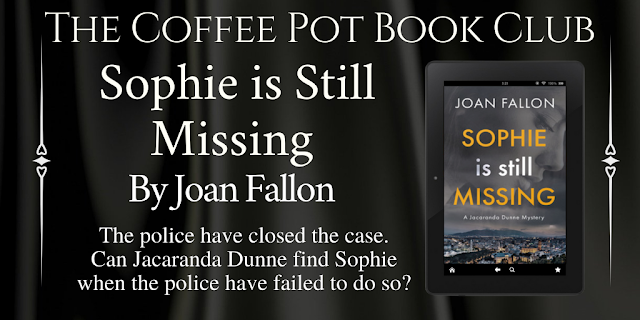 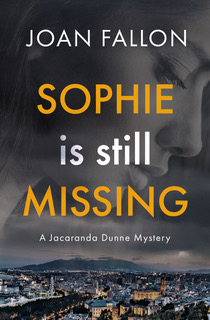 Publication Date: 21st November, 2021
Publisher: Scott Publishing
Page length: 340 Pages
Genre: Crime fiction/Detective series
Both lighthearted and serious, this intricate mystery, Sophie is still Missing, delves into the shadowy world of the Costa Del Sol, people trafficking and modern slavery.
Jacaranda Dunne—known to everyone as JD—is an ex-Metropolitan police officer who has moved to Málaga to open a detective agency. At first the work is fairly routine, missing dogs, stolen passports, unfaithful husbands, etc. Then one day a woman comes into the agency and wants her to find her missing daughter. Sophie and her best friend, Julie, both aged fourteen, had disappeared the previous summer, but an extensive police search failed to find them. Then, during Holy Week, Julie’s body was found, at the feet of a statue of the Virgin Mary, but now the police have closed the case. Sophie's distraught parents want JD to investigate the disappearance of their daughter.
But has too much time passed? Is the girl still alive? And more to the point, how can JD find her when the police have failed to do so?

The old man unlocked the heavy wooden doors to the Brotherhood to which he’d belonged for most of his life. Jorge was wearing the clothes they always wore for the Holy Week processions: his best black cloak over a simple twill tunic tied at the waist with a belt of esparto. His capirote was tucked into his belt ready; he would pull that over his head  once they were about to start. He sighed as he remembered that this was the last time he would be taking part in the procession, and a feeling of sadness overwhelmed him as he put his shoulder to the massive door and pushed it open. The heady smell of carnations came out to greet him as he stepped inside their gloomy headquarters. This year he had been honoured for his long years of devotion by being chosen to carry the Guiding Cross and lead the Brotherhood of the Virgin of Remorse on their slow, twelve-hour walk through the streets of Málaga. He hoped his gammy knee wouldn’t let him down.

‘Come on Jorge. Get a move on,’ said one of the Brothers; it was Felipe, a young man who worked as a solicitor. Behind him were almost two hundred of the Brotherhood, all dressed in their traditional robes and some even had their capirotes already covering their faces. It was a special day for them all. The Virgin of Remorse only ventured out on this one day a year, and the men had been preparing for it for months. It was the moment when they could forget their humdrum lives as waiters or bank clerks, teachers or builders; this was when they could rise above it and carry the Virgin through the streets for everyone to see, the faithful and tourists alike.

Jorge stepped forward and pushed the doors as wide open as was possible, letting his companions into the room where the Virgin’s enormous throne was kept. Some of them knelt in homage to her, others made the sign of the cross, while some of the young ones were too excited to do more than stare up at her sorrowful face. Jorge paused, the glint of sunlight on her gold halo dazzling him for a moment. He looked up at the throne, four tonnes of wood, steel and plaster covered in gold leaf and silver mouldings, and thought back to the first time he’d been allowed to be one of the costaleros; Jorge hadn’t even left school at the time and he had almost collapsed from exhaustion by the time they’d finished carrying the Virgin through the streets. He had felt such love for her that day and was proud to have been one of the two-hundred costaleros. His feelings had never changed. But he couldn’t carry that sort of weight any longer. Not anymore. Not at his age.

He paused. Something looked out of place. For a moment he puzzled over what it was. If only the other brothers could show more respect and maintain a dignified silence, but the atmosphere was electric; this was the moment when they would take their places as the Virgin’s throne bearer and carry her through the streets to her church. He peered up at her again. Yes, something was wrong. Of course. He shouldn’t be able to see her halo from here; it was normally obscured by a dark red, velvet canopy, decorated with gold and silver thread. This morning that canopy tilted wildly to the right, exposing her serene image to those below. How had that happened? Such a nuisance. Some of the younger members of the Brotherhood must have dislodged it. They were too boisterous; they still had to learn the seriousness of their task. The Virgin had been set on her throne a few days previously, and everything was supposed to be ready for them to collect her and start the procession this afternoon. With their tight timetable, there wasn’t time for any mistakes; they would be walking for hours, until well after midnight. He muttered a short prayer to himself to try and quell his annoyance and restore his calm.

‘Someone’s knocked over the candles,’ a voice behind him said. It was Juan, one of the newer members to the Brotherhood, and a baker from Churriana.

‘I’ll see to them,’ said another Brother as he clambered up onto the throne.

‘Santa Madre de Dios,’  he shouted. ‘What in God’s name is this? How has this happened?’

‘Ring the police. And hurry. There’s a dead body up here.’

‘What are you talking about?’ asked Juan. ‘Whose body?’

Jorge felt a chill down his back as though a cold wind had blown into the room. Then they all began clamouring at once. 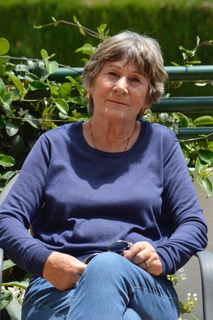 The Scottish novelist Joan Fallon writes women's fiction, historical fiction and more recently, crime fiction.. Almost all her contemporary novels have a strong female protagonist and relate to the challenges that women have to face in the modern world. Her historical novels are mostly set in Spain, where the people and culture fascinate her and have provided some exotic settings for her books. Retired teacher, management trainer and business woman, she currently lives in Málaga.
Social media links:
Website • Blog • Facebook • LinkedIn • Instagram • Twitter • Goodreads • Amazon Author Page
Posted by Mary Anne Yarde at 07:30