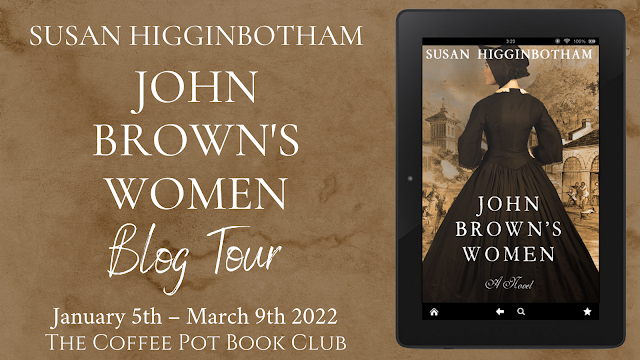 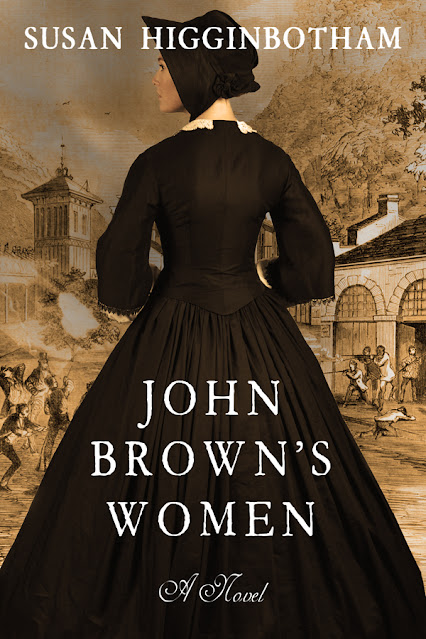 Publication Date: 7th December 2021
Publisher: Onslow Press
Page Length: 402 Pages
Genre: Historical Fiction
As the United States wrestles with its besetting sin—slavery—abolitionist John Brown is growing tired of talk. He takes actions that will propel the nation toward civil war and thrust three courageous women into history.
Wealthy Brown, married to John Brown's oldest son, eagerly falls in with her husband's plan to settle in Kansas. Amid clashes between pro-slavery and anti-slavery settlers, Wealthy's adventure turns into madness, mayhem, and murder.
Fifteen-year-old Annie Brown is thrilled when her father summons her to the farm he has rented in preparation for his raid. There, she guards her father's secrets while risking her heart.
Mary Brown never expected to be the wife of John Brown, much less the wife of a martyr. When her husband's daring plan fails, Mary must travel into hostile territory, where she finds the eyes of the nation riveted upon John—and upon her.
Spanning three decades, John Brown's Women is a tale of love and sacrifice, and of the ongoing struggle for America to achieve its promise of liberty and justice for all.

Betsy had told Mary that Mr. Brown had taken his wife’s death hard, even though gossip had it that Dianthe had not always been in her right mind. One time the Browns had attended church with the Delamaters, whom Mary had happened to be visiting, and there she had seen Dianthe, a small, plain woman. Mary couldn’t say that she was cracked, but there had been something about her. She had a lovely singing voice, but she had sang with a fervor that was somehow disturbing. Afterward, she had come out, wearing a pretty woolen cloak that she must have made herself and taken pains over. It had fallen off her shoulders, and Mr. Brown had tenderly settled it back upon her. She had thanked him, and then, not five minutes later, it had fallen again. Mary was sure that
she’d swept it off herself. She had walked placidly on, while little Ruth cradled the cloak
in her arms.
After Dianthe died, taken by the childbed fever, Mr. Brown had taken his motherless children and gone to stay with one of his tannery employees. But the employee was a newlywed, and Mr. Brown hadn’t wanted to overstay his welcome. So he had brought the children back home and, through the Delamaters, had found Betsy to care for them and the house—a rehearsal, one could say, for their marriage. So far the rehearsal appeared to be going well. The children munched their bread contentedly and kicked each other under the table cheerfully, and everything in the modest house shone with cleaning.
Except, Mary found, for the spinning wheels—a great one for wool and a smaller one for flax. Dusty and forlorn, they sat in a corner, not touched since poor Dianthe had felt the first pangs of labor.
Mary felt a little strange about taking this dead woman’s place at her wheel, so she waited until the three older boys had started off for school, then scooted the wool wheel over to another part of the room, where it at least didn’t radiate so much Dianthe. With that out of the way, she set to work. Some women found spinning tedious and tried to do it only in the company of others to better while the time away, but Mary could spin for hours in utter silence and only know that time had passed by the setting of the sun.
She was still at work, pacing back and forth alongside the great wheel, when Mr. Brown came home. “Ah, I’ve missed that music.”
“Music?”
“The music of the wheel. Hard work has its own special music, I think. And it looks like you’ve been quite productive.”
Mary nodded shyly.
“Well,” said Mr. Brown after a long pause. “Carry on, Miss Day.” 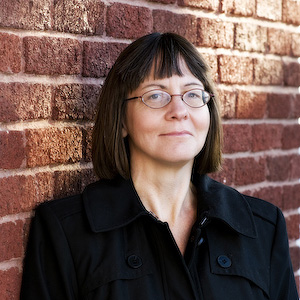 Susan Higginbotham is the author of a number of historical novels set in medieval and Tudor England and, more recently, nineteenth-century America, including The Traitor's Wife, The Stolen Crown, Hanging Mary, and The First Lady and the Rebel. She and her family, human and four-footed, live in Maryland, just a short drive from where John Brown made his last stand. When not writing or procrastinating, Susan enjoys traveling and collecting old photographs. 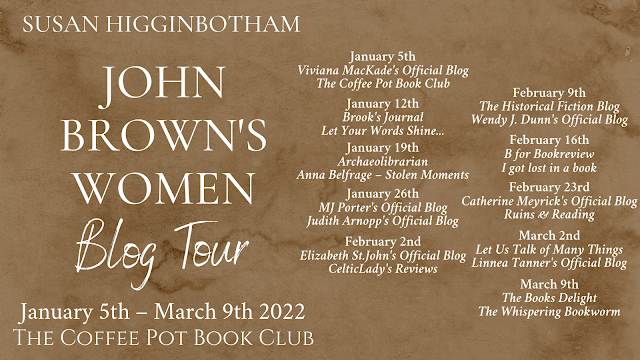