It is with the greatest of pleasure that I welcome Historical Fiction author, Brian Kitchen, onto the blog today to talk about the inspirations behind his book… 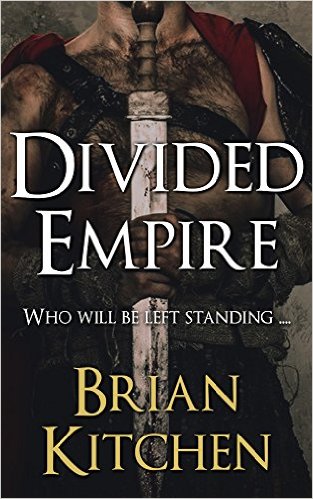 Britain, 391 AD.
The geographical, political and social outlines of the annexed nation are being constantly redefined, as the battling powers in Rome attempt to seize control of the Empire.
Flavius Vitulasius and his trusted associate, Siward, are journeying to receive a highly confidential mission, across the narrow sea, from the Master of Offices in Gaul.
On their path, they stumble upon a seeming damsel in distress, her carriage under attack from bandits. Using all their prowess and experience, Flavius and Siward rescue the damsel from certain death. Nevertheless, the beautiful young lady, Corellia Velva, is not as she seems.
When Corellia slips away the following night, Flavius thinks nothing of it. He has orders passed down from the Emperor himself to attend to. A document, the ‘Pagan Concord’, threatens to pull apart Britain at the seams, creating the lurking fear of civil war between the Christians and Pagans.
If Flavius and Siward can recover the ‘Pagan Concord’, they will be able to unmask the conspirators behind the unrest. With the help of an ardent Christian, Lucius Aurelius, the trio commence their enquiries in a clearly divided Britain.
However, their expedition takes an unexpected turn when they visit the town of their first suspect. Once again, they come across Corellia. She fervently denies any knowledge of Flavius and Siward, suggesting that it is a case of mistaken identity, prompting suspicion from Flavius.
The disquiet among Pagans soon becomes clear, as ritualistic sacrifices and mysterious disappearances soon become the norm, while Flavius attempts to track down the ‘Pagan Concord’ and save the country of his origin. It is not long before he has some unwelcome attention, as murderous villains stalk his every move.
Can Flavius locate the document in time?
Is there more to Corellia than meets the eye?
Can he escape the clutches of his murderous pursuers, and uncover a conspiracy that goes right to the top?
Divided Empire is a compelling piece of historical fiction. The first in the series, there is an unexpected twist around every action-packed corner. 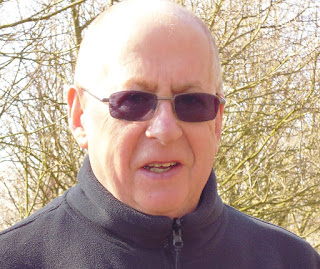 The inspiration for the 'Divided Empire' series of novels first came back in 1994 when I came across an article in our local newspaper, the Burton Mail, written by a local historian, Dennis Bladon.  Since childhood I have been interested in history, but particularly the history of Roman Britain, even though my home town, Burton upon Trent has little known Roman history. Apart from a Roman urn that was found at Shobnall in the town and some Roman coins which were found at Callingwood on the outskirts of the town, there is little evidence of Roman occupation. Dennis Bladon to my surprise however, theorised that Burton upon Trent was the lost Roman settlement of Ad Trivonam. An interpretation of the name Ad Trivonam is 'the meeting of three roads, by the river'. Now at the time of Dennis’ article only the routes of two Roman roads were known to run through the town and so his theory wasn't given much credence. Four years later however, a Roman road was discovered leading from Leicester in the direction of Burton, which helped to support his theory and my imagination was fired. 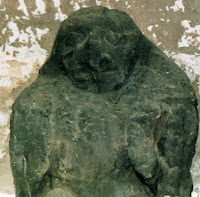 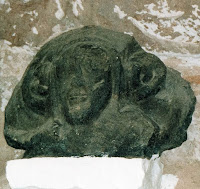 Further inspiration for the 'Divided Empire' series came from our local castle at Tutbury, near Burton upon Trent. Although the castle is Norman, it is built within the site of an Iron Age Hill Fort, as is the village itself. When the well in the castle was being cleaned out some years ago, a number of small Roman artefacts were found, including a pair of tweezers and some Samian pottery shards. When I visited the castle some years later, I saw displayed in the tea room at the castle, two stone carvings (I visited recently and they are still there). One of the stone carvings fascinated me, as it looked very much like stone carvings that I'd seen of the Celtic God Cernunnos, whilst the other stone carving looked like a Celtic fertility goddess. The two stone carvings were apparently found during excavations of the Castle moat, which explains their worn conditions.
The Celtic tribe which occupied the West Midlands was the Cornovii and it is possible that their boundaries stretched as far as Burton & Tutbury. The meaning of the tribes' name has long been a matter of conjecture, but Anne Ross thought that the tribes name contained the element meaning 'horn' (cornu) and could therefore possibly mean the tribe were worshippers of a horned deity. Cernunnos is one such horned deity and in 'Divided Empire’ it is the one the Cornovii worship. Not far from both Burton upon Trent and Tutbury is the village of Abbots Bromley, where each usually each September, the Horn Dance takes place. Although the present Horn Dance dates from the Middle Ages, there is some belief it has its roots in pagan times. For my novel the boundaries of the Cornovii in the east stretch as far as the River Dove and Ad Trivonam and Tutbury, which is known as the 'Lookout fort on the Dufan' are both within the tribe’s territory.
Flavius Vitulasius’ home in ‘Divided Empire’ is in Ad Trivonam in a villa overlooking the Trisantona Fluvius (the River Trent). In Shobnall on the Sinai Hill is Sinai House, now in private hands, but in the days of Burton Abbey it was the country house of the Abbots and later converted to a sanatorium for use of the monks. Local legend has it that when some repairs were being carried out in the 1800’s, a Roman mosaic was uncovered in the cellar of the house. For the purposes of my novel Flavius’ home is a villa on the site of Sinai house, though if the legend is true, then it is more likely that a temple would have stood there.
As regards the historical background to my novels, they start in 391AD; three years after the Emperor Theodosius had defeated Magnus Maximus and restored Valentinian to the throne of the Western Roman Empire. I have tried to keep the events that followed true to the known history of what followed as regards Arbogastes eventual usurpation of the throne and his placement of Eugenius as his puppet upon it. What the true events were in Britain are not fully known however, as the history of that period is sketchy at best. I’ve therefore based events in the novel on what could have happened, using the known later events as a guide. ‘Divided Empire’ is after all a work of fiction, but one that sets out to tell a good story. As regards what people wore, eat, the way they lived and their daily lives, I’ve based as much as possible on what is known of the period.


I live in Burton upon Trent, England and am married to Lynne and have a son, Mark and two tortoise shell cats, Tansy & Zoe. I enjoy walking in the countryside, photography, reading, writing, visiting museums and historic sites & buildings and supporting Burton Albion.
I first became interested in the history of Roman Britain as a child and loved the 'Eagle of the Ninth' trilogy of novels by Rosemary Sutcliff. When I was older I read & studied all that I could about the history of the period, visiting many museums and archaeological sites to further improve my knowledge. I am a member of The Association for Roman Archeology.
I've always had a passion for writing and when I retired from Local Government Health & Social Services, I wrote a guest column in our local newspaper for two years and also decided to write novels set in late 4th Century CE Roman Britain. The first of the Flavius Vitulasius Novels, 'Divided Empire' is my first published novel, but there are many more to come and the second novel is nearing completion. I hope that you enjoying reading the novels as much as I've enjoyed writing them.
Should you wish to know more about Flavius & his friends, you can find me at:
Twitter: Brian John Kitchen @Oldbrookender
Website: www.briankitchen.me.uk
Facebook: facebook.com/FlaviusVitulasius