Because sometimes a girl needs a dragon, not a knight.

Smoke and Mirrors
By
Jess Haines 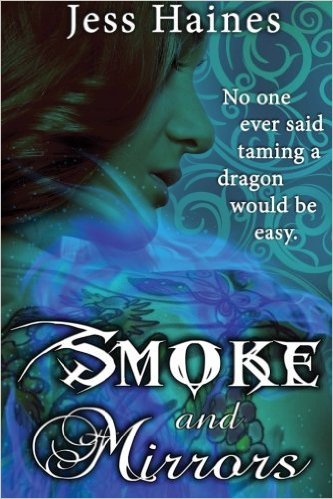 A girl who uses her illusions to fool the world into thinking she's just like all the other magi.

A dragon who sees through her lies.

Together they just might survive a world that wants to control or destroy them both.

Kimberly may wield ultimate cosmic power, but even a mage has to pay the rent. No one will hire her for her magic talents until she's got the credentials, so she's stuck in a crappy rent controlled apartment with her mother, yearning for treats she can't afford at her part time job in a cafe, counting down the days until she graduates the secret Blackhollow Academy school for magi. Only then will she have the certificate she needs to land her dream job in a coven.

The problem? She needs a familiar to graduate.

As an illusionist, she doesn't have the ability to summon or create a familiar of her own. Her only option is to convince a supernatural creature to let her bind it instead. Since having a powerful Other at her beck and call would guarantee her a place in a coven after she graduates—and legendary treasure hoards are an added bonus—she thinks binding a dragon as her familiar will solve all her problems...

Smoke and Mirrors ~ was ever a book so aptly named?

A skilfully told story that captured my attention from the beginning and held it throughout. This is an action-packed adventure, with so many twists and turns that it left me with whiplash ~ but in a good way!!

The protagonist, Kimberly, is an incredibly well-crafted character. She is one paycheck away from eviction, but she hides her hardships behind an illusion. No one sees the tatty clothes or how thin she is from lack of food. All her classmates see is someone who doesn’t quite fit into the magical world. Kimberly is desperate to graduate. If she doesn’t, then she fears that there will be no way out of the poverty that currently defines her life. All she has to do is find a dragon that will consent to be her familiar. But, what dragon would want to bond with someone like her?

I really liked Kimberly. She is a very loving and humble young lady, who doesn't come from a magical background ~ she only learnt that she had magic when she was 16 ~ because of this, Kimberly is sublimely unaware of the danger she is in. She seeks out Cormac, having no idea who he really is. She has been told that he can help her find a dragon. He is, therefore, her last hope.

Kimberly provokes strong protective emotions in Cormac, although at first, he is wary of her motives. Cormac cannot deny the physic desire he feels towards her and he cannot understand why he has this all-consuming, irrational want, to become her familiar.

I loved the characterisation of Cormac. He comes across as being incredibly wise and strong. You would want him in your corner! But there is also this endearing hint of vulnerability about him, which made him appealing. I enjoyed reading about him.

The antagonist, Viper, is a dark and poisonous character. He is suitably evil, although I am guessing there is a backstory to him, which I would be interested in learning about.

Smokes and Mirrors is a well-crafted and incredibly compelling novel. I loved the many mythical creatures. Haines has created a believable world with an endearing protagonist. A book worth reading. 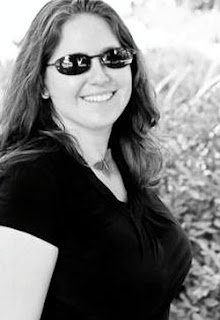 I'm a displaced New Yorker with a penchant for the silly, the obscure, and the fantastical. Tampa, Florida is home for the time being. I'm currently working on the H&W Investigations urban fantasy series and the Blackhollow Academy young adult contemporary fantasy series. Find out more about my books, drop me a line, or join my mailing list at www.jesshaines.com!