I am so excited to have Michael Reuel on the blog. His new book is definitely one I look forward to reading as it is all about Robin Hood! 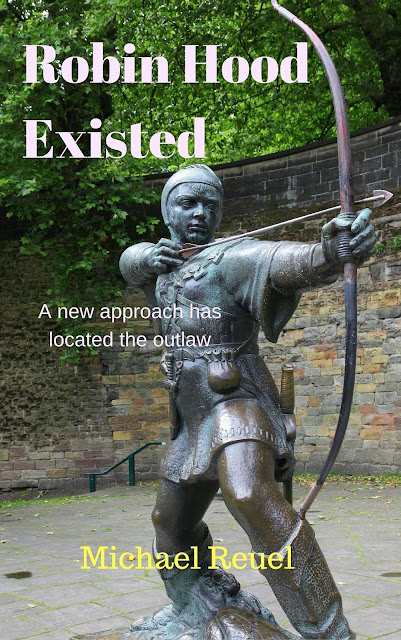 Historians tend to point out that there is no historical evidence for the existence of Robin Hood, but there is an incredible amount of folkloric evidence for his existence that has gone overlooked.

Folklorist Michael Reuel delves into the legend in order to assess how much we can learn by studying folklore, without applying the rigid terms of ‘historical’ proof. In the process he discovers that, although folklore does have obvious limitations in terms of what it can prove, the sheer amount of source material on Robin Hood is nevertheless sufficient enough to conclude that the famous outlaw and his Merry Men did in fact exist.

If you are interested to understand how Reuel has been able to arrive at this conclusion, then his research is chronicled here in the ground-breaking ‘Robin Hood Existed’; a study that promises to open a new window upon the story of Robin Hood and the life of thirteenth to fourteenth-century England.

As well as shedding new light upon the story of everyone’s favorite outlaw, Reuel provides a compelling exploration of the nature of storytelling, defining some of the key differences between how truth and myth manifest in the human psyche, and highlighting many factors that lead to certain peoples and stories becoming overlooked or dismissed by historians. 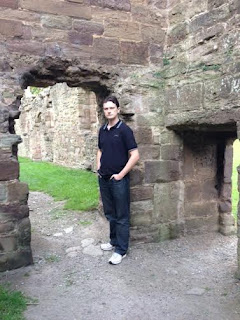 A few years back the opening line of Wikipedia’s ‘Robin Hood’ page kicked off with a sentence that was something like, ‘Robin Hood was a medieval outlaw who didn’t exist’.

I don’t have the exact wording as the page has since been improved on, but I remember the line well because it was the catalyst for leading me to begin the research for what I then didn’t know would end up turning into the upcoming publication ‘Robin Hood Existed’. From the title, I’m sure it’s pretty easy to guess that my conclusions disagree with whomever was responsible for that Wikipedia entry. An amended page was not enough for my liking, however. My instincts had always been to suppose there was a real person behind the legend, but I had turned a corner and wanted something of substance to explain why.

For someone in love with British folklore I was conscious of the fact that the journey might be perilous, leading only to disappointment. What if I ended up siding with the naysayers? But that was not the case. The more I looked at all the factors involved the more complete my picture of the legend became, so much so that I don’t even like using the word ‘legend’ anymore and have tried to purge it from the book as much as possible.

Before stumbling upon Wikipedia that day I had always interpreted the public mood towards the Robin Hood story as being one on which the jury is still out. Although I sided firmly with the camp that thought he did exist, even before my own research, I was comfortable with the status quo; there is no firm ‘historical’ evidence after all. Fearing that there might be a growing tendency to dismiss England’s – and perhaps the world’s – favourite hero in such a way, however, made me sensitive on the subject of credibility. I began to notice how those who don’t believe that certain folklore has some truth behind it are far readier to adopt a tone of being in the right than those who remain curious. But baseless scepticism has never equalled wisdom, any more than romanticism has. Plus, as anyone who enjoys reading up on their favourite period of history will attest, the picture of history that the public consciousness is presented with – even to the extent of being taught it in school – is very rarely one from which sound judgements can be made.

Before I started reading up on Robin Hood’s time, the period of history I was most familiar with, from personal interest, was that surrounding the Norman Conquest of England. Now anyone who knows anything about British history knows that 1066 is a pretty important date to consider. People who grew up in the UK do not have to be very historically aware to know who the winners and losers were at the Battle of Hastings. Even those who try to avoid history as an interest are likely to be able to say something about King Harold being the one who possibly died with an arrow embedded in his eye.

On the famous demise of England’s last Anglo-Saxon king, however, I feel it apt to point out that I have yet to come across any major historical publication, in the last 20 years at least, that has found reason to humour the conclusion that Harold II died with an arrow in the eye or chopped down by a horse rider, as the Bayeaux Tapestry suggests.

Yet, presumably for no other reason than because this is a debate that has rumbled on through history and so has become a force of habit, we are still taught that this is what happened. Certainly I was taught so at school and, as I have worked as a proofreader of educational material, I have also come across the same teachings in current school texts. Along with many other statements that are simply amazing, such as ‘England as a nation was formed in 1066’.

It was not and neither did those responsible for the Bayeaux Tapestry know how Harold II died. Everyone who has written on the events of 1066 knows this, as does everyone who has read up on the up-to-date conclusions available, but everyone else still gets the other version.

Similarly, ‘everyone else’ is still presented with a construct of the Robin Hood stories that has the outlaw motivated by keeping the throne of England from Prince John, during the time when Richard the Lionheart was at war in the Crusades. Whereas those who have researched the original stories know that the king on the throne during Robin Hood’s time was always an Edward.

They should also know that the outlaw was a ‘yeoman’, which in aristocratic terms basically means a nobody. And yet many who do humour the possibility that the folklore is genuine still attempt to layer its origins with the idea that ‘Robin Hood’ became a second identity for some nobleman or earl with a grudge. The Earl of Huntingdon becomes a regular suspect, as does a disinherited Robin of Loxley.

Understanding why historians have constantly attempted to tie the outlaw to an identity that can be traced within available records became an important part of my research. A folklorist needs to understand what smokescreens have been put up and why, before being able to assess what the purist interpretation of the story really is and the truth that is too often overlooked when studying Robin Hood is that the life and achievements of yeoman from the thirteenth or fourteenth centuries are not very likely to be historically proven at all.

So why are we so unable to appreciate the down-to-earth side of this famous hero? Can it be that our modern sentiments still remain more attached to the glory of royal blood and nobility than we would like to think? For sure these desperate attempts to give a man who lived in the woods some kind of link to the aristocracy suggest so.

A scene from the film Monty Python and the Holy Grail springs to mind. King Arthur, on his way to a castle occupied by ‘French types’, stops to speak to couple of peasant folk who are rolling around in the muck. Prior to this he has been identified as a king by the commoners because ‘he hasn’t got shit all over him’. The peasant folk he stops to speak to are not so interested in him as Mary Anne Yarde, as one of them says ‘Dennis, there’s some lovely filth down here’, which they then start gathering. With this image in mind, I can’t help feel that all the historical studies available have done very little to advance our view of what common medieval folk were like. The peasants are more than they seem though, questioning the king’s right to rule supremely over them because some ‘watery tart threw a sword at you’ and lecturing him about how they are an ‘anarcho-syndicalist commune’.

It would be nice to think that an exchange like this did actually happen, but I feel it is also apt to question whether we really went through the entire medieval period without there being a single peasant or yeoman who turned out to be a lot more than meets the eye.

My research for ‘Robin Hood Existed’ is not solely a historical one, therefore, but also a folkloric one. The search demanded that I discard looking for proof of the outlaw in stately homes and official records and go deeper. Crucial to understanding the folklore is a better appreciation of what it meant to be a ‘man of the wood’, other than just that a woods is a convenient place for hiding from the Sheriff. The social heritage and geography of the region are essential in this respect, as are linguistic observations and, perhaps most importantly, the nature of storytelling itself, in both its written and oral forms.

Tread carefully, therefore. I promise to delve into the ‘legend’ without the need to tie up the folklore with recognised figures from history, or tying up the goings on in Sherwood and Barnsdale as having much to do with who sat on the throne of England at all. There will be no further layering or smokescreening in order to arrive at a position of comfort. So, if it does turn out that our favourite outlaw had shit all over him, then that’s just fine with me.

Michael Reuel is a writer of adventure mysteries that are inspired by myth, as well as being a keen folklorist. He grew up in Coventry, England and studied at the University of Wales, Bangor. His first published work was the sinister Not Far From Aviemore in 2014 and he is currently working on a follow-up, as well as exploring obscure pre-1066 folklore.
Posted by Mary Anne Yarde at 08:00