'I'm going to write my war novel...'
By Beryl Kingston
…says the young writer in her twenties or thirties. And I hear what she says and cringe, because I know from having read, or dipped into, quite a lot of 'my war novels' that, even if it's competently written, ten to one it will disappoint me. And the reasons for my disappointment are always the same. It is because the writers present their characters as though they are living in the 21st Century. They speak in the same way as we do now, think in the same way and act in the same way, our thoughts, speech and actions being very closely linked. I don't correct any of them because I can see what a lot of work has gone into their creation but it upsets me because it belittles the courage of most ordinary people who were involved in the horrors of the Second World War - and the four year carnage of WW1.

In the late 30s. When the members of the newly emerging ARP were being prepared and trained for the jobs they all knew they would soon be doing when the air raids began, they were given clear instructions. 'Always stay calm,' was the first and most important. 'No matter what you are seeing or what you might be feeling, don't let your casualties know it. Tell them 'We're here. We've got you. You're going to be all right.' If you cry or panic you will put them into even deeper shock than they're in already. Stay calm.'
And through the ten terrible months of the London Blitz and the bombing of ports and cities all over the country, and all through the attacks by doodle-bugs and rockets, that's what they did. I saw it at first hand. 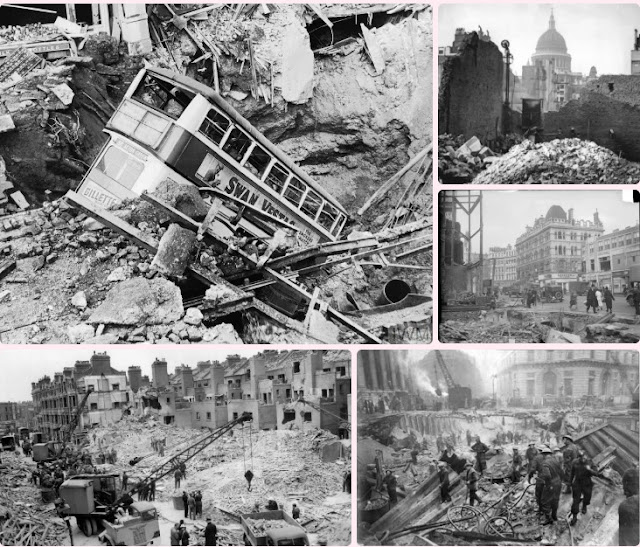 Let me tell you a true story about what the war was really like.  I found it in the Mass Observation diaries, the first-hand day-to-day accounts that ordinary people kept all through the war and sent to the Mass Observation team, and it was written by a young woman in the ARP. She had been on duty all night long rescuing people from the wreckage of their homes and shelters, as the bombs continued to fall and she was cycling home 'feeling very tired' when she was hailed by a rescue team who were still working on yet another bomb site. They told her she would do because she was skinny. They explained that they had an injured man at the bottom of a pit. They'd managed to dig down to him but they couldn't get him out until the heavy lifting gear arrived or they would bring the rest of house down on top of him, and he was in pain and needed morphine. Would she go down to him?
She stripped off her uniform so that it would be easier to squeeze down and was lowered into the stink, darkness and danger of the pit. When she reached the bottom she found that the man was horribly injured. Most of his face had been blown away. There were black holes where his eyes, nose and lips had been and he was plainly in agony. 'But,' she reported, 'I remembered my training and kept calm. I told him he was going to be all right and that we would get him out and I gave him the morphine.' She stayed with him until the drug had taken effect and the heavy lifting gear had arrived and then she was hauled out. She wrote about it so calmly, it made me weep. 'I put my clothes on,' she wrote. 'Then I was sick.' I'll bet she was. 'Then I went home.'

Now that's courage and compassion of a very high order and that's how most people were. I hope when my 30th book is published later this year, my readers will find it equally revealing and honest. It is called 'Citizen Armies', and is about a Warden, an Ambulance Driver and their two daughters who are nurses. It starts on the day the war was declared and is written from diaries I kept at the time, so the speech, thoughts and actions are as accurate as I could get them. Respec', fellow citizens! I honour you.
I'm going to end this blog with a poem I wrote more than half a lifetime ago, because it shows how our language changed when we were at war and what it was like to spend our nights in the cellar waiting for a bomb to fall on us.

My childhood stopped abruptly when I was nine
Bitten off by war, in whose foul maw
My generation lost our innocence.

Everything changed after the first blitz.
The days descended into dark and dust,
Clogged with alerting, soon-familiar smells.
Old brick, damp wood, escaping gas and shit.
Even our words were changed.
Scrimping became a virtue, light a crime,
Food became "rations", fire "incendiaries",
Bombing, an "incident" producing "casualties"
We needed euphemism to deflect
Too much, too sudden, raw reality.
A "raid" could sound quite thrilling
"Down in the drink" disguised a sea-killing
"Missing" postponed the mallet shock of "dead".

The sirens' fear-inducing wail
In the first frightened week could drain us pale,
But by the third alarm we'd learned to counter panic by routine.
Boots on your feet and blanket on your arm
Down to the cellar, in a coal-damp dream, settle the baby, find the cat, pour tea
Thread grandma's darning needle, make a bed.
Ignore the laboured droning overhead, the enemy above us in the air.

Under the stair and crouched by coal,
We heard another reassuring sound
Of night trains rumbling in the Underground.
And meters gave their old familiar cluck,
Though every shift disturbed the dust, which stuck
Like black snow on the cards we held and played, to show we weren't afraid.
The ear-high light bulb flicked and flickered and swayed
To the rhythmic thump of railway line ack-ack
And we were all together in that foetid black,
Our nightly vigil staunchly automatic.

The adults round me, stolid and phlegmatic
Revealed the value of control and calm,
That cowardly hysteria does the most harm
And should be feared and shunned, and rightly hated,
That bravery is quiet and under-rated
And constantly contained,
That the responsible are self-restrained.
We learned that terror carries you past grace,
Past hope, past fear, past feeling to a space
Beyond sensation.
Learned too, no matter how you pray or cry,
That "if your number's on it", you will die.

Our resignation was a comfort to me in our cellared nights
And holds and guides me still,
Do what I will. 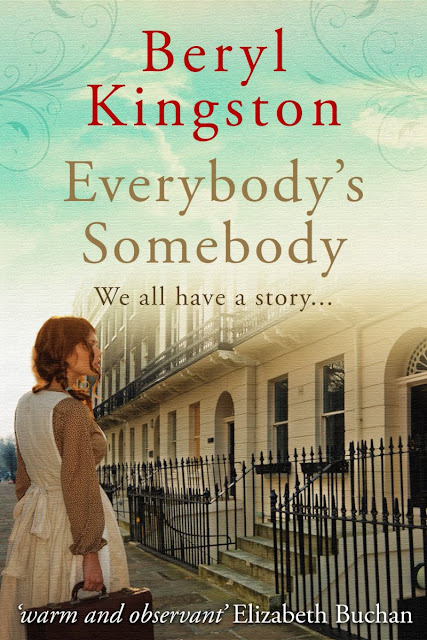 Rosie Goodison is not one to shy away from life’s problems. Whether it’s finding work or challenging injustice, Rosie squares her shoulders, sets her chin high and faces it full on.

Born at the end of the nineteenth century, in the rural south of England and sent into service aged just twelve, Rosie quickly discovers that many good people spend their lives toiling for very little reward, whilst others ‘have it all’.

Whilst working as a housekeeper for two upper-class boys, Rosie starts to learn more and more about the world, gleaned from overheard conversations and newspapers left lying around. This triggers an ongoing thirst for knowledge, which shapes her views, informs her decisions and influences her future.

Without realising it, this young woman is blazing a trail for all those who are to come after.

Whilst working in London, Rosie meets her sweetheart Jim, but the The Great War puts paid to their plans for the future, and matters worsen afterwards, as she, along with the rest of society, tries to deal with the horrors and losses.

This heart-warming story follows the events of the early twentieth century – the impact and horrors of WW1, the financial crisis and the rapid social and political changes that took place.

All that remains of Rosie now is a quartet of paintings in an art gallery. The artist, now famous but the model, unnamed and forgotten; nobody of consequence.

But everybody has a life story. Everybody leaves some kind of mark on this world.

Citizen Army
Follow the characters in Everybody’s Somebody through WW2 and up to the bloodless revolution of 1945.
Coming soon… 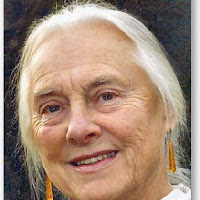 It sounds immodest to say so, but I am a prolific bestselling author. My first book was published in 1985 and was an instant bestseller. From then on I wrote a best seller every year for the next 14 years. Some of my novels are family sagas like Hearts and Farthings and its sequel Kisses and Ha’pennies, some are modern stories like Laura’s Way and Maggie’s Boy, some are historical novels set in the 20th ,19th, or 18th century, some are war stories like A Time to Love and Avalanche of Daisies which feature WW1 and WW2.

I reached the top payment level for public lending right with my 4th book and passed the million mark in sales with book number 12. I am now 86, pushing 87 and writing my 30th novel.

I have also written plays for the children I taught during a long teaching career, stories for various magazines and a novella about a conceited cat. Bloomsbury reader and Endeavour Press are currently reissuing my back-list on various e-book sites including Kindle.

I was the winner of the 2014 Blake Society Tithe Grant Award.

I was married for 54 years, had three children and five grandchildren and now has eight great-grandchildren, with another one on the way, and they are the apples of my eye.