Join #HistoricalRomance author, Elizabeth Keysian, as she takes a look at the allure of lace... #History #Regency @EKeysian

The allure of lace - a brief history
By Elizabeth Keysian

For me, understanding lace was a bit like Monty Python‘s quest for the Holy Grail – one minute I thought I’d “got it”, the next I hadn’t; and there seemed to be plenty of Frenchman (and Italians, and Belgians) thumbing their noses at me along the way. And in the end I discovered it was a pointless quest and I was mad enough to be put away for good.

And yet, the allure of lace was so strong, I’ve had to keep trying. Antique handmade lace is complex, valuable, and mindbogglingly time-consuming to make (it takes approximately 10 hours to make one square inch of a fine Honiton lace). I really wanted to understand how a textile art that essentially began with cutting holes in perfectly good pieces of linen became so popular.

I also wanted to be able to shout at TV costume dramas, “That type of lace is completely wrong for the Regency, you idiots.” Because it usually is. Handmade lace is so varied, one can not only work out roughly which quarter of what century it was made, one can also tell the provenance. We had a flourishing and varied lacemaking industry in this country (Great Britain) in the late 18th and 19th centuries. And if we weren’t happy with our own products, we could smuggle in the really valuable stuff from Flanders or Italy. Such illicit importation, cheerfully known by its operators as “free trade”, was rife during the maritime blockade against Napoleon Bonaparte. I made much use of this fact in my Regency romantic adventure, “A Perilous Passion”, where the hero and heroine first meet when she spots some contraband lace floating in the sea. He thinks she’s about to drown herself...which is where the fun and games begin. 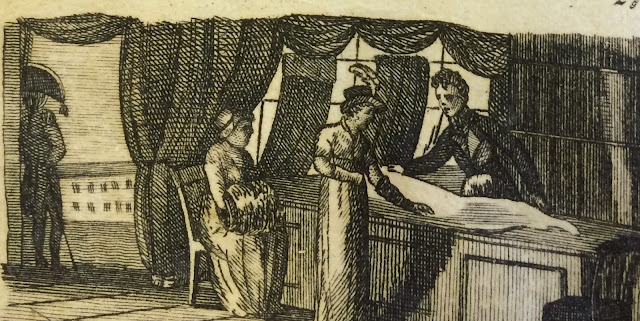 So how did lace originate? It is akin to embroidery really – it’s what happens when one removes the background fabric from parts of the embroidery. Or one can just cut shaped holes in the fabric (generally finely woven linen) and then infill those gaps. This is a form of lacemaking called “cutwork” and one of the earliest styles of lace, Italian Reticella, was made this way. Below are two examples I photographed in the Burano lace museum in Venice. They are late 16th or early 17th century and both include human figures in the design. The edges of the cut cloth are secured with buttonhole stitch to stop them fraying. Buttonhole is the main type of stitch used in what is known as “needle” lace. The remaining areas of fabric are held in position by needle-made “bars“ or “brides”.

Gradually this early form of lace developed into a self-supporting textile, as can be seen in the next pair of images.

At this stage in its evolution, triangular pointed edges were popular but patterns for lace changed with the fashions.


In the late 16th and early 17th century, metal lace was favoured, made from fine gold and silver foil, or wrapped thread. Even linen was expensive, and it was just as important for our aristocratic ancestors to be portrayed wearing lace as it was jewellery.

The next image is a close-up of a Venetian needle lace.

One can see the thick buttonhole stitch edging. The area which, in Reticella lace, would have contained linen cloth, has now been infilled with different styles of “clothwork”, all made with a single needle and thread.

As you can see in the next photo, lace had to be designed before it was made. The outline of the design is drawn onto thick paper and is overlaid by thick threads, sewn into place right through the pattern paper and the supporting cloth beneath. Once the gaps between the outline threads have been infilled with decorative needlework, the lace can be removed from its backing.

The Venetian island of Burano developed its own style of needle lace, using a mesh foundation instead of bars to keep the pattern together. The mesh in the example below was handmade, as machine-made net did not become available until the early 1800s. This net or mesh is known as a “ground”. The shape of the mesh varied depending on the style and provenance of the lace. Burano grounds had a ladder-like appearance.


I had such fun trying to identify the lace collection in the museum where I used to work that I decided to have a go at making my own lace. I thought if I made it, I would understand this textile miracle better. I opted to make bobbin lace, as this looked much easier than needle lace. Needless to say, my novel-writing became so time-consuming, all I ended up doing was covering the lace pillow with fabric, and putting pretty beads on the ends of the bobbins to distinguish them from one another. But I haven’t given up hope of one day taking the project further.

Bobbin lace can look similar to needle lace unless one knows what to look for, but it is less likely to have any raised areas than needle lace, and it often features geometric and repetitive designs.

I have made my own little collection of bobbin lace, and had a fascinating time looking at it under the magnifier and trying to work out if it is hand or machine-made. In general, machine-made lace (from the mid 1800s onwards) has a fuzzy appearance, and it’s hard to follow the path of any single thread.

This close-up image of a bobbin “tape lace” shows where the “clothwork”, or woven areas are joined by “bars”. The other photo is of an appliqué lace, where separately made motifs have been applied to a net “ground”.

The lace industry of Georgian and Victorian Britain was a tough one for its employees. The workers were mainly women, but children as young as five could be employed. Each worker specialised in a particular part of the process, so the lace could be mass-manufactured. Hours were long, pay was poor, and doing such fine work in poor light must have been really hard on the eyes. So although I find this textile beautiful, I remain aware of the agonising toil that sometimes went into making it.
So, that’s my swift voyage through the history of lace. I claim the right to have made mistakes. I really don’t think I understand more than the basics even now; each time I try to identify some of my lace, I end up more confused than when I started. If I ever get to make any of my own, I’ll let you know. 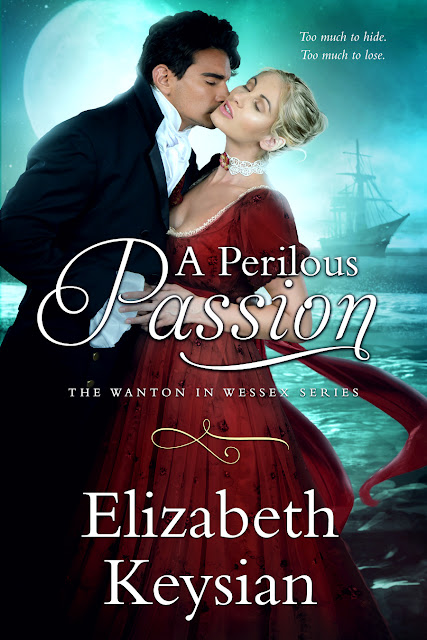 Miss Charlotte Allston's curious nature has always led her to trouble. This time, she's tangled in a web of traitors and spies and quite literally swept off her feet by a handsome stranger. But all is not what it seems with the Earl of Beckport.

The earl is living incognito, hunting a band of smugglers at the center of a plot for the French to invade England. The enigmatic Miss Allston becomes a person of interest...and not just in the smuggling case. Passion flares swift and hot between the two. But when her attempts to help with his secret mission only endanger it, he must question where her loyalty truly lies.

When Charlotte is captured by the very traitor he's after, the earl must decide between redemption...and love.

A stand-alone Regency romantic adventure, with smugglers, spies and a hot historical hero! “A Perilous Passion” out now from Entangled.

Elizabeth is a founder member of A Touch of Intrigue – a Gathering of Authors and Readers of Historical Romance. They have the best Facebook parties EVER. Please join up: HERE!