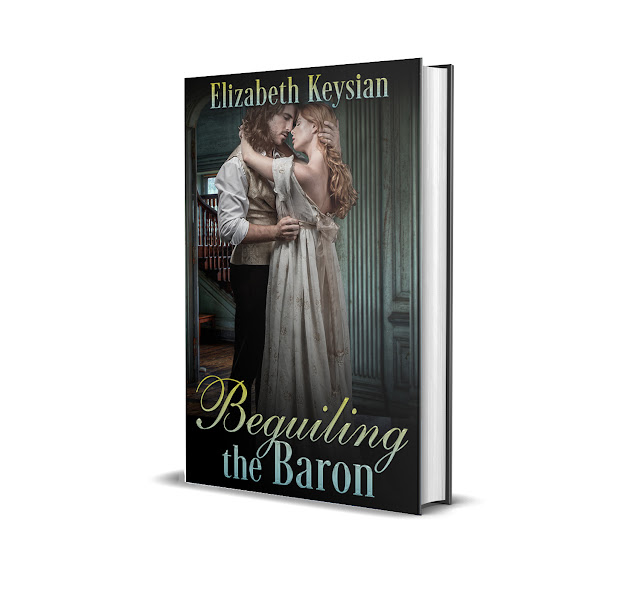 Beware reclusive barons. They are more hot-blooded than you’d expect.

A man who lurks day and night in an eerie tower must have something to hide. So thinks Galatea, governess to Lord Ansford’s love-starved young daughter. Galatea’s new employer is objectionable, stubborn, great-hearted, handsome and, curse it, well worth saving from himself.

He proves her right with some shocking physical encounters, adding tinder to the blaze of her growing love for him. But just as the barriers between them are crumbling away, the tower crashes down.

With Lord Ansford inside it.

“Good God, what’s digging needles into my leg?” Lord Ansford jumped up in alarm as a small, dark object propelled itself from his lap to the ham on his plate. With impressive speed, he seized the silver cover from the sideboard and clamped it down on top of Polly’s kitten, which mewed its resentment.

Seeing his furious face but also aware of the sounds of feline eating coming from beneath the cover, hysteria threatened. “I fear it is Polly’s kitten,” Tia gasped.

At the footman’s almost immediate appearance, her amusement was doused by a wash of fear. What did the furious aristocrat plan to do with Polly’s pet?

Ansford handed both plate and cover to the bemused servant. “There is a live animal beneath here. Deal with it, if you please.”

Tia watched in horror as the hapless creature was whisked out of the breakfast room. She turned anxiously to Ansford, who was glowering at the unwelcome interruption to his breakfast.

She couldn’t bear it. “You won’t kill it? Please, my lord, don’t. It has given Polly such pleasure.”

The look he turned on her froze her to the marrow. With the briefest of nods, he turned his back on both her and Mama and stalked out of the room.

“I thought he was improving. But I was wrong—the baron’s as hard-hearted and rude as ever.” Tia’s temper rose.

Mama shot her a worried look. “What do you think he’ll do?”

“I’d like to say he’ll eventually see the humor in the situation, but I fear Ansford would choke and suffocate if he attempted to laugh, he’s so unused to it. He’ll probably have the kitten drowned.”

“Oh no, you don’t think so? Polly will be devastated.”

Of course, she would. Tia would be too. “I don’t believe Lord Ansford understands about tender feelings.” She heaved a heartfelt sigh. “His own died with his wife.”

“I hope you’re mistaken, but he seemed excessively angry with us. Do you think he’s a bit peculiar in the head?”

“That wouldn’t surprise me at all. Now, I’d best hurry up and see how many French verbs I can get Polly to conjugate before she learns of her kitten’s demise. When that news reaches her, we’ll have to abandon the curriculum for at least a week.”

Unless, of course, she was brave enough to tackle Lord Ansford. Again.

But in his present mood, how could she do so without risking the fate of all those she cared about?

Elizabeth Keysian is giving away one ebook copy of 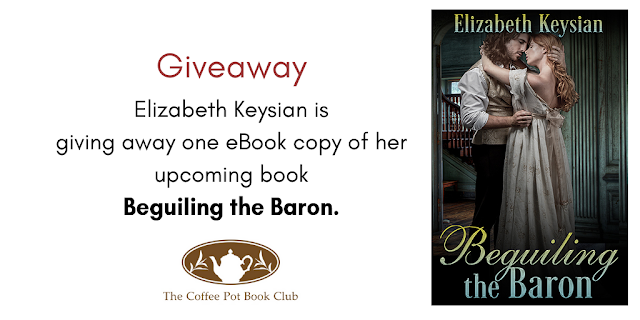 All you need to do is answer this question:

“What do you think Lord Ansford will ultimately

do with the kitten?”


Leave your answer in the comments at the bottom of this post.

• Leave your answer in the comments at the bottom of this post.

• Giveaway is only open Internationally.

• Only one entry per household.

• All giveaway entrants agree to be honest and not cheat the systems; any suspect of fraud is decided upon by blog/site owner and the sponsor, and entrants may be disqualified at our discretion.

•Winners will be announced in the comments.

• Winner has 48 hours to claim prize or new winner is chosen.

Pre-order your copy of

Read for FREE on

Elizabeth is a founder member of A Touch of Intrigue – a Gathering of Authors and Readers of Historical Romance. They have the best Facebook parties EVER. Please join up:HERE!