Join me in conversation with Historical Fiction author,
Chrystyna Lucyk-Berger. 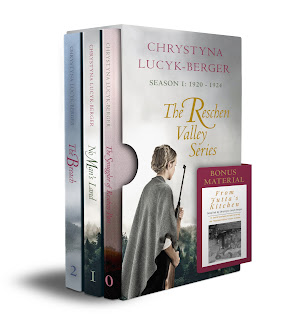 Please give a warm Coffee Pot Welcome to Historical Fiction author, Chrystyna Lucyk-Berger. Chrystyna could you tell us a little about yourself?

I grew up in the culture-rich neighbourhood of Northeast Minneapolis (Minnesota, USA) and, for as long as I can remember, always knew I would live elsewhere, specifically abroad. For the last 19 years, I’ve been living in western Austria. It’s a very long story as to how I got here, but I was nursing my travel bug for one. It is because of that curious nature of mine, that thirst for adventure and always looking to see what was around the next corner, that I entered the realm of historical fiction. 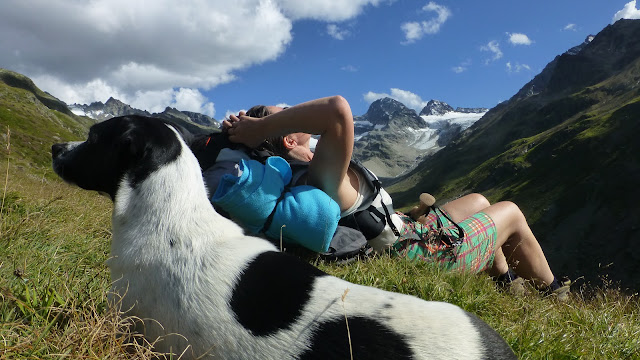 I adore the Reschen Valley series, can you tell us what inspired you to write it?

Imagine driving south over an alpine pass, crossing from Austria into Italy. You might expect Italian restaurants, Italian signs, and Italian architecture. But that’s not what happens. It still looks like the Austrian Tyrol with a few Italian names but the German language is very present.

Keep driving, because here it comes: spread out before you, an unbelievably beautiful reservoir nestled into the horizon and spanning some 4 miles. The sight of that aquamarine water takes your breath away. You pass the first town and quickly come upon the next one called Graun / Curon Venosta. And then there it is. Off to the right, some 50 feet from the lakeshore, is a fully intact medieval church tower rising straight out of the water. This is the setting of the Reschen Valley series. 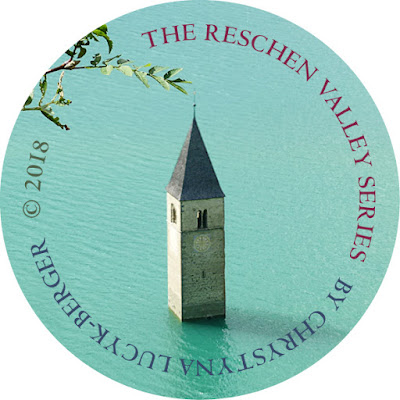 I had to develop my German a lot before I could become an effective detective and find out what the heck happened. It took me almost five years to get to that point. The deeper I went, the more mysterious and thrilling the story was becoming, especially in regard to how the reservoir was built. I was making two or three trips a year there, spending a lot of time in the province and getting to know two cultures: the Austrian Tyrolean one and the northern Italian one.

By the time I visited the Reschen Lake reservoir for the tenth time, a whole slew of characters had risen above its surface: a young farmer woman, a sassy innkeeper, an Italian engineer, a German carpenter, a dog. A Fascist colonel. They clambered into my Nissan Micra and never let go.

It must be such an inspirational place. Dare I ask, what were the challenges you faced in researching this period of history? 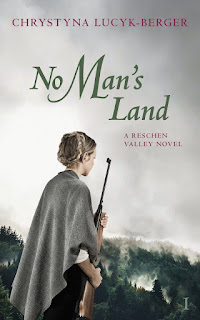 My journey in writing what will be five novels spanning 35 years, required steering around many a conundrum. First, how far beneath the strata of my two cultures must I go before I can feel confident about creating a semi-fictitious world and still do the cultures justice? I could never presume to know or understand enough than that which lays beneath the first few layers. I will always be an outsider writing from an outsider’s perspective. And I feel that has its advantages. 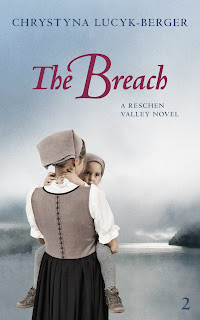 Further, I’m writing the books in English with characters who would normally speak German and/or Italian. It’s thrilling to have this much fodder for conflict: cultural clashes, misunderstandings, plays on words. I am also, however, acutely and painfully aware that my ability to play on those in depth are limited if my audience is an English-speaking or English-reading audience. This has caused me to experiment in creating a world that is universally understandable. The trick was to have enough of both cultural aspects and unique language that, should these novels ever be translated into German or Italian, they would not feel watered down to the native population, or even alien. I’d lose credibility like that. As a matter-of-fact, we’re addressing those very issues with a Tyrolean publisher right now. 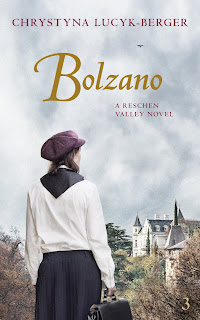 And then there was the question of taking sides in the conflict. I made the decision to explore all aspects of this story, all its arguments, and objectives. It is not my job to illustrate who is right and who is wrong in this conflict and I don’t think it’s realistic anyhow. Once again, I made conscious decisions to create three-dimensional characters with all their flaws and strengths, with all their motivations to do good or, in worst case scenarios, evil. I did not want to make this conflict my conflict, though.

In the end, I set out to write a gripping story with characters readers can engage with. While uncovering one of the least known histories in western Europe, I also discovered that there is a warning in those pages that we, today, must also heed.

Well, I think you did a magnificent job! Did I mention I love your series?! There are many books about the interwar period in Europe. Can you tell us three things that set your series apart?

1.) I’m going to bet my firstborn that the majority of the readers here have never heard of the Tyrolean-Italian conflict. So, right there, I’m introducing you to a new culture, a new country, a whole new historical aspect to the interwar period in Italy, and Germany/Austria.

2.) As mentioned in the previous question, my writing focuses not just on the relationships, the story and the plot, but reveals how communication impacts those relationships: the misunderstandings caused, the conflicts that arise, or—on the flip-side—the connections made, and the resolutions inspired despite cultural clashes and language barriers.

3.) One more thing that might set my novels apart is the land itself is a character. I have to explain this a little: back when I was drafting the first two books, I took an online course with Faber and Faber. My editor was Tom Bromley then. As we were discussing my manuscript, he said, “Chrystyna, I think you need to write this so that the valley, that whole land, is a character in your book. We have to feel for it. We have to have a tie to it, a relationship to it, as readers, and feel empathy for it.” I thought, “wow…okay.” I’m a huge outdoor enthusiast and have a reverent relationship to nature. One of the reasons that I love South Tyrol is because it truly is one of the most magnificent and spectacular regions of the world for nature, landscape, climate… it’s got mountains, valleys, rivers, lakes, vineyards, apple orchards, centuries-old chapels and frescoes, castles on every ridge…it’s truly, truly special. You won’t find any other place like it. And Tom was right—I had to make that into a character. I had to get my readers to care about it, at the very least, as much as I did. I had to get readers to understand that bind to the land Katharina and her valley have.

I knew I had succeeded when a book review popped up and stated exactly that. “Even the land is a character in this novel.” I was delighted to be able to send Tom the screenshot of that one!

What are you currently working on?

Book four! Its working title is called The Option and it takes place just a couple of months after Bolzano. It’s 1938, and the Anschluss has Mussolini up in arms (he’s really ticked off with Hitler), and my anti-hero Angelo is trying to get into parliament to make a difference, to really help the Reschen Valley folk. Only problem is, he’s a member of the Fascist party—has to be—and he is once again up against things that are bigger than he can chew. But, I’m excited. This is Angelo’s turning point. Up until this time, he’s had a serious struggle with himself and his development. We also get to follow Annamarie, after she has fled the valley and disappeared to Innsbruck. She’s stuck in the Third Reich now, pursuing her dream of becoming an actress. I’m really excited about her story—when I outlined it, she was already taking me down twists and turns and dark labyrinths when WW2 breaks out. Her mother, Katharina—my steady, sweet-natured protagonist—is also going to come up against some very big demons and here, in this part, we will see a totally different side to her. She’s more mature, less idealistic, more straightforward and hardened. And she’s a lion. When fascist ideologies from both the Third Reich and Italy threaten to permeate her household, she takes a firm stance with her sons, quite possibly at the cost of losing them both. To make matter worse, when Hitler and Mussolini come up with a plan to rid themselves of the South Tyrol question once and for all, it will be a heavy blow to Katharina and her beloved valley. The crack in their community is going to fissure and start breaking them all apart… 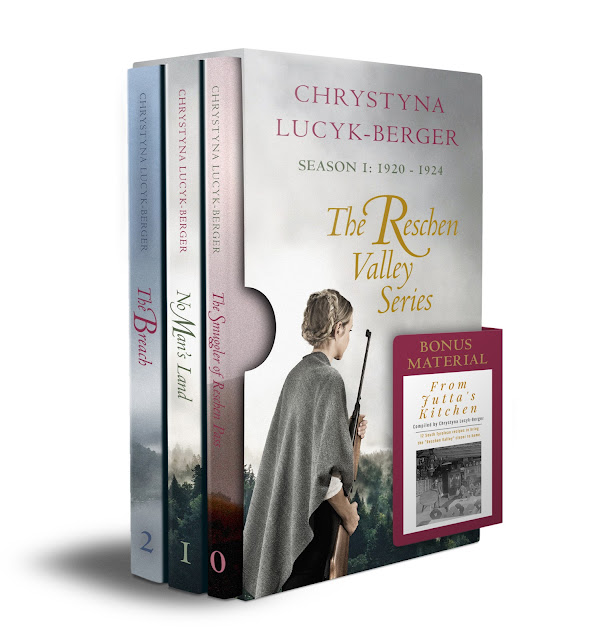 She wants her home. He wants control. The Fascists want both.
1920. Former Austrian Tyrol.
When Katharina Thaler, a young Tyrolean farmer, finds a wounded Italian engineer in the mountains of the Reschen Valley, her decision to save his life thrusts both of them into a labyrinth of corruption, prejudice and greed.
Angelo Grimani, a civil engineer, knows the details of a project that may destroy Katharina’s valley. Not in favour of it himself, he returns home to fend off the forces that envision the biggest reservoir in Italy, headed by Angelo’s own father.
As the Tyroleans gear themselves to fight for their land, the Fascist party gathers power and momentum. Katharina and Angelo must each decide what to protect: love or country?
Dive in and discover the gripping saga based on a history you never knew. This box set contains the first three of six books: No Man’s Land: Part 1, The Breach: Part 2, The Smuggler of Reschen Pass: The Prequel and bonus material including, From Jutta’s Kitchen: 12 South Tyrolean Recipes to bring the Reschen Valley series closer to home. Save now on the regular individual retail price!
With an average of 4.25 Stars on Goodreads, Amazon and Bookbub, you'll want to sink your teeth in.

Pick up your copy
Kindle • Books2Read 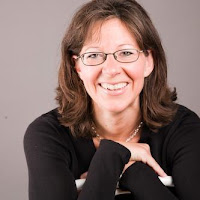 Chrystyna Lucyk-Berger is an American author living in Austria. Her focus is on historical fiction now. She has been a managing editor for a publishing house, has worked as an editor, and has one several awards for her travel narrative, flash fiction and short stories. She lives with her husband in a “Grizzly Adams” hut in the Alps, just as she’d always dreamed she would when she was a child.