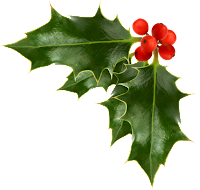 For those living in the Dark Ages, winter was a long drawn out affair. It was cold, food was scarce and the threat of death was ever present, like a knife dangling over ones head, waiting to claim its next victim. It really was a fight for survival. Nothing was guaranteed - at least of all your life.

From the very beginning, the darkest days of winter was a cause to celebrate. The people needed something to look forward to and spring seemed so very far away.

Arthur and his knights celebrated Christmas - if the stories are to be believed. In fact, Christmas at Camelot was usually very memorable and you wouldn't want to miss it, because Arthur’s Christmas feast were renowned.

There was music so exquisite that it lifted your eyes towards the Heavens. Singing raised the spirit. Dancing made your heart beat in time with the drums and served as a reminded to the guests that they were alive, and they were part of something special.

The Great Hall was lit with expensive candlelight, probably made of beeswax, and a fire burned brightly in the hearth, so no one felt the cold. This was a safe place, and the worries of the world could be left outside the castle gates. Nothing bad could happen to you when you were enfolded in the warm embrace of Camelot’s strong and mightily walls. 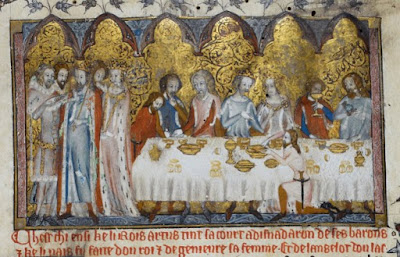 Feasting at King Arthur’s Court
And the food…every type of delicacy was served - no expense spared. The first course arrived to a fanfare of music, as if the meal itself was royal. Soups, bread, fish, spice cakes, the list was endless - no one went hungry here. There was so much food that the tables bowed with the weight of it.

For every two knights there were twelve separate dishes. Beer overflowed and the wine kept on coming. It was a good time to be alive.

Let us not forget the entertainment. Bards traveled from afar to tell their magnificent tales of knights and dragons, villain's and heroes. Jesters and magicians made sure everyone was having a good time. Maybe they would even have had a snowball fight - can you imagine that? The knights of Camelot battling it out in the snow, slipping over on the ice as they threw a wet ball of snow at their next victim! Gifts were exchanged and Arthur looked on and thought this is the life; this is how it should be.

How do I know all of this? You ask…

The Arthurian Christmas feast is described in the tale Sir Gawain and the Green Knight. Can you remember that story? I have blogged about it before, but if you have missed it you can read about here.

Truthfully, I have no idea how Arthur celebrated Christmas. Nothing of social etiquette was written down in the Dark Ages - in fact hardly anything on any subject was written down - which is why it is called the Dark Ages. All we can do is have an educated guess, but the problem with guesses, even educated ones, is that they can be wrong. The medieval text, that I am using as reference, was written in the late 14th Century. The author, of Sir Gawain and the Green Knight, who goes by that famous name, anonymous, was probably writing about medieval feasting in the 14th Century, it was what he knew after all. Although, I do not think a beheading game was a particularly popular party game in the 14th Century - anonymous must have made that bit up.

But let us imagine, for one moment, that the text of the Green Knight is accurate. What would theses 12 dishes look like?

I am going to take an educated guess…and I have already told you what that means.

Pottage, a kind of soup, but I am thinking of a rich one made with the finest cuts of beef, no dollops of fat and gristle in this soup - unless you asked for it.

Roasted Goose perhaps, or maybe roasted Partridge – how about both?

A boars head? That always looks good on a table.

Eggs - maybe preserved ones, because chickens generally stop laying during the winter months.

Pastries
The only fresh vegetables would have been seasonal, but back in the Dark Ages and the Middle Ages for that matter, it was not recommend to eat raw fruit and veg, for fear of dysentery – one of the biggest killers of the time.

But hey, they had ale and mead and wine and beer, to wash it all down with. I should imagine there was many a rosy face at these feasts. And these feast went on for days. It would have cost a fortune to host, so Arthur would have certainly had to have been very wealthy.

I often imagine what it would have been like at one of these feasts - noisy, I should think and busy. Eating until you felt like you have been stuffed. Surrounded by your friends and foes alike - for I doubt very much all the knights liked each other - can you imagine the egos and the competition between the knights to be the best and the favorite of the King?!
Still, I think everyone would have had a good time...

Although maybe not Gawain, he had next Christmas to look forwards to, when it would be his turn to bare his neck and face the Green Knight's axe.

Email ThisBlogThis!Share to TwitterShare to FacebookShare to Pinterest
Labels: Arthur, Gawain and the Green knight, Knights of the Round Table. King Arthur's Christmas. Myths and Legends, Sir Gawain