Cadbury Castle was once a site of both a Bronze and Iron Age Hillfort. It sits in the civil parish of South Cadbury, in Somerset, England, and for many centuries it has been associated with Arthur's Camelot. 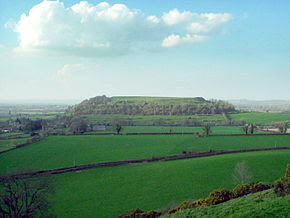 Well, for many years it was thought that it was. John Leland (1503-1552) who was regarded as "the father of English local history and bibliography" stated that;


"At the very south ende of the chirch of South-Cadbyri standeth Camallate, sumtyme a famose toun or castelle, apon a very torre or hille, wunderfully enstregnthenid of nature. . .The people can telle nothing ther but that they have hard say that Arture much resortid to Camalat."

He genuinely seemed to believe that Cadbury was Camelot. In fact, Leland believed in the historical King Arthur so much, that if any were to disagree with him - the Italian Scholar, Polydore Verfil, for one - he took serious offense and would have to write a very long publication dismissing such nonsensical claims.

Local legend backs Leland up. Under the hill, beyond a pair of iron gates in a cave, is where Arthur sleeps, waiting for the day he shall rise again.

Thanks to the endorsement of Leland's work, Cadbury became, I guess the right word would be, to all intents and purposes, Camelot.

The Camelot Research Committee dug at the site, between the years 1966 and 1972, hoping to find evidence that this was Arthur's Camelot. What they found caused something of a sensation. They discovered that the 18-acer site had been fortified with a drystone wall. Inside the protection of this wall, timber buildings once stood - one of which was a large Feast Hall. Whoever this fort belonged to, they were wealthy. Fragments of imported pottery, from as far away as the Mediterranean, were also found there. No one had seen anything like it. It must be Camelot, for what other explanation is there. Who else would build a wall around a fort, that you could only enter into through a gate? Who else but Arthur? 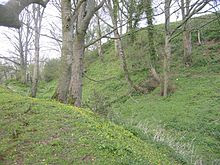 What the dug discovered was that this place was unique.
It was also close to Glastonbury - Avalon - It all fit.
And of course there was the causeway, known locally as King Arthur's Hunting track, which linked Cadbury to Glastonbury.

As different hillfort sites across Somerset were excavated, it turned out that having a drystone wall around the fort was the norm. Cadbury wasn't unique. And they did not find anything that directly linked Arthur with the site, apart from wishing it so. But, it did throw up something interesting. For some reason the locals, a warlord we should assume, decided to bring his people into the safety of a fortified fort in the period c.470 - 500 - which is when it is thought Arthur lived. There was obviously some sort of crisis going on in the area, a war with the Saxon's perhaps? Interestingly, within half a century, the fort had been abandoned, the crisis therefore must have been over.

So back to the question...is Cadbury, Camelot?

Let us not forget that Camelot was an invention of the French poet, Chrétien de Troyes, it isn't and wasn't a real place. It is a simple work of fiction. Now, I am not saying Arthur didn't have some sort of hillfort, he may well have done. But legend would have it that he lived in Cadbury, and for now, I guess that is enough.
Posted by Mary Anne Yarde at 15:57

Email ThisBlogThis!Share to TwitterShare to FacebookShare to Pinterest
Labels: Cadbury Hill, King Arthur, Myths and legends. Arthur and his knights of the Round Table. Arthurian legends. The Round Table