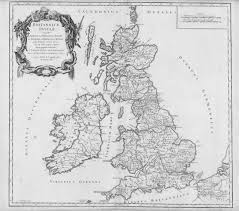 I love looking at maps. I think they are absolutely fascinating, particularly old maps - the AA roadmaps of today just confuse me - thank goodness for satnavs!

Do you own an Atlas?

If you do, I am sure you will agree that they are usually so big that they do not fit on your bookcase. I have a book of old maps that is twice the size of a normal atlas. It is huge and lives on top of my wardrobe, for there is no where else to put it - although living there does have its disadvantages, especially when I want to get the maps down. That book can really hurt when you drop it and it lands on your foot. Believe me...I know! What is she rabbiting on about now? I hear you say...has she been at the sherry again? Quick hide the mulled wine.

Actually, I do have a point and I will get to it.

The problem with Britain, back in the day, is that she was split up into many different kingdoms. Sometimes these kingdoms merged and became larger kingdoms - likewise, sometimes these kingdoms broke apart. A map of Britain in AD500 would be unrecognisable to what it is now - obviously the geography of the land would be the same, it wasn't shaped like a tennis racket or anything crazy like that - I mean there were just lots of kingdoms - over 40 to be precise.

The Romans had united some of the kingdoms - for a time - if you remember your history the Romans gave up trying to conquer the holy terrors of the north and Empire Hadrian ordered a massive wall to be built to keep these barbarian warriors back.

There was no England, Wales and Scotland as such.

But there seemed to be a heck of a lot of King Arthur's.

England has one. Wales has one. Scotland has one. And one of them is even Roman. I would not be surprised if one day those astronauts will find a sword, stuck in a stone, on the moon or maybe even Mars - most likely Mars.

Historians have spent years researching, arguing, coming to conclusions and scratching their heads, about who Arthur was, and where he actually came from.

The legend states that he is from the South-West of England - no question there. Avalon is in Glastonbury, Cadbury Hill is Camelot, and Arthur has strong connections with Cornwall as well.

Now Cornwall, wasn't always called Cornwall. Sometimes her name looked remarkably similar to what it does now - Cornovii, but that was not always the case.

In AD500, she was called Cerniw. And this is where it gets a little complicated, because Wales also had a kingdom called Cerniw, which is believed to have been somewhere near Newport. Arthur is referenced to having a court in Cerniw. Do you see the problem and where I am going with it?

Firstly, there is Dinas Powys Hill Fort. Archiologists has dated this fort, near Cardiff, as being a prominent high status building dating between the 5th and 6th Century - Could this be Arthur's fort? 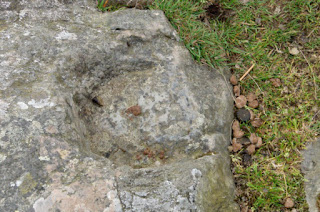 There is even a hoof print of King Arthur's horse at Carn March near Gwynedd. What other evidence do you need?

For those who want to know the story of the hoof print - read on for a very brief outline.

Arthur's horse dragged a monster from the river at Llyn Barfog. The end. I told you it was brief.  If you look closely at the picture above, you can just make it out.

Wales also has plenty of lakes which could have been the location of Avalon. The two most probably locations are both in Snowdonia -Llydaw and Llyn Ogwen. 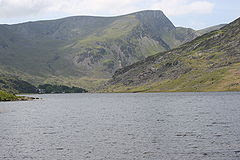 And remember, Merlin was Welsh. Carmarthen, in Wales had an Oak tree that used to stand in the town centre. It was a magical tree and even had a name - Merlin's Tree. There is also a story that Merlin was imprisoned in a hidden cave at Bryn Myrddin - Merlin's Hill - it is said if you listen very carefully, you can still hear him groaning.

Forget about Arthur being buried at Glastonbury. How about the standing stones at Pembrokeshire's Preseli Mountains? Or maybe he is buried in Glamorgan.

What about Arthwyr, King of Glamorgan and Gwent, rumour has it he became High King of Britain. He had a daughter called Morcant (Morgan).

Do you know when you don't feel very well and you check out your symptoms on the internet and scare yourself witless thinking you are suffering from some rare tropical disease that only infects 0.000000001% of the population. I sometimes think that is what it is like when I am hunting for Arthur. He can be made to fit where ever you want him to. Now, I am not saying he isn't Welsh. He could well be. He could just as well be Scottish, who knows. And I don't think it really matters. What matters is that the stories of him are timeless and what he and his knights stood for really defines the word 'noble.' Maybe that is all we need to really know.

Also, on another note, Wales was the location of many of the scenes in the BBC series, Merlin. Maybe, Arthur and his knights were simply heading home.