"I am a writer, I give the truth, scope!"
Chaucer, A Knights Tale (movie quote).

I have often mentioned, in my blogs, the French poets of the 12th Century and how they came to influence the Arthurian Legend.

Chrétien de Troyes was one of these poets.

Troyes is often credited with being the inventor of the modern novel - although it would take many centuries before the first proper novel was published.

What made the work of Troyes so different to the norm of the 12th Century?

His stories had a beginning a middle and an end. He was the first to write such literature. Before this, the Celtic bards may have told tales of a battle or a particular time in history, but there was never anything coherent to their tales - there was no order. Troyes was the first to make sense of the muddle.

Little is known about Troyes's life. He may have been at the court of Marie of France the Countess of Champagne, employed as a writer and he has also been linked to Philip, the Count of Flanders.

Regardless of his life and who and where he may or many not have been, his romantic poems have had a major influence on the Arthurian Legend as we know it today. His work is considered one of the best in medieval literature - he would have ranked number one on the Amazon charts, if Amazon had been around back then! And his stories...well, lets just say that you have more than likely heard of them, even if you did not know who they were written by.

I want to look at just one of his great masterpieces today and to explore how he shaped our future opinion of Arthur and his knights. 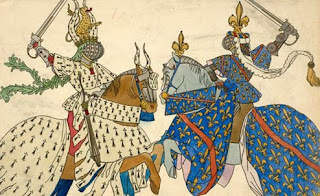 We all know the story of Lancelot - even those who do not take much interest in Arthurian Legend could probably tell you something about him.

"Lancelot was the knight who had an affair with Guinevere, Arthur's Queen."

It is interesting to note, that until Troyes work, Lancelot had been but a minor figure in the Celtic myths of Arthur's court - hardly worth a mention, and it is even suggested that there was no such knight until Troyes invented him.

It is said that Troyes patroness, Countess Maria was rather passionate about the idea of courtly love, and you can not get more romantic than the love triangle between Arthur, Guinevere and Lancelot. Ironically, it is rumored that Troyes felt so disgusted by the adulterous nature of the story that he could not finish the work himself, but handed it over to his clerk. I wonder what he would think now, if he knew that after Arthur, Lancelot was the knight that everyone remembered?

Tell me the story.

Queen Guinevere had been abducted by the cruel and vicious knight, Meleagant. Sir Gawain embarks on a heroic rescue mission. On the road he meets a young knight, Lancelot, who has ridden his horse so hard, that the animal has died of exhaustion. Lancelot persuades Gawain to lend him a horse and then he gallops away, leaving Gawain staring after him. Gawain finally catches up with Lancelot, only to find that he has run his new horse to death as well.

Both knights realise that they are trying to rescue the same woman, Guinevere.

Lancelot encounters a dwarf with a cart - like you do!

This dwarf tells Lancelot that he knows where Meleagant has taken Guinevere. He kindly offers for Lancelot to ride on the cart. Lancelot is reluctant, for it is dishonorable for a knight to ride upon a cart. Eventually he relents, and climbs on board. Gawain decides to follow on horseback - there is no way he is going to take a ride in a cart.

The journey is not an easy one and it is made harder by Lancelot's lowly form of transport. The pair encounter incredibly rude knights and beautiful women intent on mischief. But their progress is slow, so the two of them decide to split up, that way they would be able to cover more ground.

It is Lancelot that finds the Queen in the castle of Gorre. But Guinevere sends him away - there is no way she is getting on to the cart (what was the matter with this woman? - get on the cart).

Lancelot's only option is to find Gawain, as he has a horse, but although the Queen is proving to be stubborn and ungracious, he finds he cannot leave her alone. Guinevere, obviously realising how completely off her trolley she sounds, apologises to Lancelot and they spend a passionate night together. However, when Lancelot broke into Guinevere's chambers he hurt his hand and leaves the sheets of Guinevere's bed covered in blood. Meleagant, seeing the blood, accuses Guinevere of adultery ( because abduction is all right?) and the only knight with such an injury in the vicinity at the time is Sir Kay.

To cut a long poem short...

Lancelot challenges Meleagant to a duel, but Meleagant's father interferes and in the end the two men agree to fight each other in a years time.

Guinevere makes it home, but Lancelot does not for he is tricked by another dwarf and ends up in prison, although he is kindly let out to for the duel, as long as he comes back again afterwards.

Lancelot wins and then being honorable, or incredibly stupid, returns to his captors. And here Troyes story ends. He entrusts Godefroi de Leigni to finish his work for him.

Troyes also wrote Perceval, the Story of the Grail, again he did not complete this work - maybe because he died - how inconsiderate is that?!

No one knows if Troyes had access to any original sources to which he based his works on. He vaguely said something about Celtic myths, but unlike Monmouth he had not secret manuscript that conveniently got lost after he had finished with it. Dare I suggest that he was using something called his imagination?

His work was very popular, evident by the number of manuscripts that still survive to this day. There is, it seems, nothing better than a good story.
Posted by Mary Anne Yarde at 16:41