Owen - Book One of the Tudor Trilogy

I am not going to blog about King Arthur today. I want to, instead, talk about another period of history that I love just as much as the Dark Ages and that is the reign of the Plantagenet's. The House of Plantagenet reigned from 1154 until 1485 and they are, to date, the longest reigning royal dynasty in English history. Their long, and mostly successfully reign, finally came to an end on 22 August 1485 when Henry Tudor beat King Richard III on the fields of Bosworth - The Battle of Bosworth marked the dramatic climax to The Cousins War, or The War of the Roses as it is now more commonly known.

Philippa Gregory has done an awful lot bringing this fascinating period back into the spotlight. You may have read her books or you may have seen the British television series, The White Queen. If you have not, then you really should.

Philippa Gregory always writes from the view point of the women from that era, but I have often wished someone would write a really good novel from the male standpoint, and I think I may have just found the author that not only writes about that era, but does so to such a standard that he leaves you wanting to read his books over and over again. 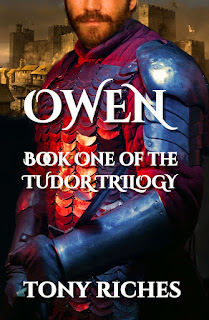 The book I have the very great privilege of reviewing today is Tony Riches "Owen - Book One of the Tudor Trilogy."

When we usually think of The Tudors, we immediately recall Henry VIII..."Divorce, beheaded, died, divorced, beheaded, survived."... Or we may think of Elizabeth, "The Virgin Queen," and how she protected the shores of England from the Spanish Armada.

But, there is so much more to the Tudor dynasty than these two colourful characters.

Tony Riches takes his readers on a journey back to 1422.

King Henry V is dead and a young, handsome, Welsh nobleman - Owen Tudor - who was a soldier in King Henry's army - becomes the Keeper, of the beautiful Queen Catherine's, household.

Catherine's infant son, Prince Henry, has just been crowned King of England and France. But with the  death of his father, Henry V, the court is full of whispered accusations and a greed for power, because there is a lot to gain if you can manipulate the King, more in your favour.

This story is about how a humble Welshman falls in love with his Queen, who, despite all the reasons that she should not, returns his feelings. They marry in secret and their marriage stays a secret for many happy years, for Owen knows that if their marriage were ever to be discovered, it would be his head on the block.

Written in the first person, you witness the beginning of the Cousins War through the eyes of Owen Tudor.

Tony has weaved an incredibly evocative tale that immersed me in the time that he was writing about. I could almost smell the stench and feel Owen's desperation as he lounges, apparently forgotten, in Newgate Prison. I grieved with him as he lost members of his family. I felt his fear as he look towards a future, that he could not possibly predict anymore, and I have to admit I was shouting "NO," in my head, as the final chapter closed.

Some books have the power to stay with you and this is one of them. I have read this book twice and I know it is going to be one of those books that I read again and again.  And I really hope that the BBC will one day discover this book, because I would truly love to watch it come alive on the screen.

Do I recommend it? What do you think? It is in my top five favourite books that I have read this year, and I read a great many books. I cannot wait for the next in the series. So, if you are looking for something to read and love Philippa Gregory then I highly recommend you put Owen- Book One of the Tudor Trilogy at the top of your reading list.

Tony Riches is a full time author of best-selling fiction and non-fiction books. He lives by the sea in Pembrokeshire, West Wales with his wife and enjoys sea and river kayaking in his spare time.
For more information about Tony’s other books please visit his popular blog, The Writing Desk and his Wordpress website and find him on Facebook and Twitter @tonyriches.