Who was Sir Bors and wherefore did he come?

Family history time. Bors was the son of King Bors - who was the brother of King Ban of Brittany - who was the father of Lancelot. I hope you are keeping up. I could draw a family tree I suppose, which would probably explain it a great deal more clearly...
One hour later...
...I think I am asking far too much of myself...I shall keep persevering thought for I am not one to give up...
Five minutes later...on second thoughts, perhaps I will ask my eldest to draw the tree...
Twenty minutes later....Why can't I do that?? 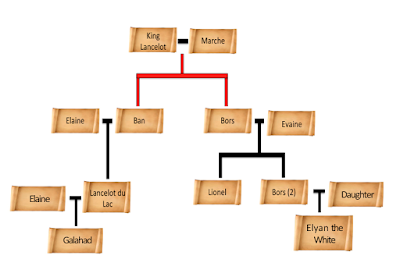 Well that didn't take long now, did it? Me and my great ideas.

So now we know where Bors is in the family tree -- I am sure you all very much relieved and will be able to sleep easy tonight because of It? But, just to confuse the issue, in my book The Du Lac Chronicles which is out early 2016 ( I shamelessly plug ) Bors is not a member of the Du Lac family and he actually waged war on Lancelot during the Du Lac wars...and that is all I am going to tell you about my book today, so if you want to find out more, guess what you are going to have to do???!

We need to have a quick look at King Bors life so I can put Bors junior, who I am talking about today, in context. King Bors and King Ban were allies to Arthur and helped him in the struggle against the uprising of the eleven kingdoms. Unfortunately, both Bors and Ban died battling Claudas. Lancelot got lucky and was raised by the Lady of the Lake, whereas Bors junior and his brother, Lionel, were taken captive by Claudas where they had a particularly unpleasant childhood. Thankfully, they finally managed to escape - although they did kill Claudas's son, Dorin, before they left - but they say he had it coming. Claudas, for obvious reasons, was not pleased and he retaliated, but the boys were rescued by a servant of the Lady of the Lake and they spent what little remained of their childhood with their cousin, Lancelot.
To cut a long story short, all three boys end up as knights of Camelot.

Bors father's a child - but remember this is the time of sorcery and magic rings. Bors is tricked into carnal relations with King Brandegoris daughter and a son comes from the union. Bors recognises the child as his own, despite the magic ring, and he later introduces Elyan to court. In T. H. White's book, The Once and Future King, Bors is describe as an "Almost virgin." How can you be an almost virgin? The mind boggles. He is also described as being incredibly bad tempered. Maybe it was because of his "almost virgin" status?
Ignoring White....
Bors is very chivalrous and becomes one of the Grail Knights and, along with Percival and Galahad, he witnesses the mysteries of the Grail with his own eyes. Sadly, he is the only one to return to court after seeing the Grail.

However, believing in chivalry and honour can have it's drawbacks. I can remember, many years ago, during my school days, one particular teacher who taught us philosophy. This teacher had a thing for impossible situations where no matter what you did, someone died. She did this every single lesson, I jest not. I could give you lots of examples but, I will save you that torture and tell you about just one. Here goes...Two men are drowning in the sea, one of them was supposedly your father and other had the cure for cancer...we were told we could save only one. I pointed out that I couldn't swim, so there would be three people drowning instead of two... the teacher wasn't impressed with my answer -- personally I thought I made a valid point and I still stand by it. Nevertheless, if you were in that situation, who would you choose?

But what has this got to do with Bors? I hear you yell.

Well, Bors found himself in this situation. His brother, Lionel needed rescuing - the poor bloke was being whipped with thorns by some terrible villains, but down the road Bors witnessed the abduction of a pretty, young girl by a rogue knight...Oh my days, it is beginning to sound like an episode from that Australian soap-opera, Neighbours. 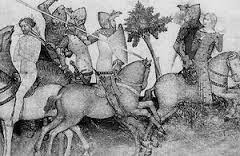 Bors decides to rescue the girl, whilst praying desperately for his brother to be delivered by the Lord. Lionel manages to escape, but he isn't too happy with his brother's choice - in fact, Lionel is so angry that he tries to kill Bors. Bors drops his weapons and says "If you want to kill me, kill me - I'll not defend myself." Maybe he was trying to call Lionels bluff, but it didn't work. Lionel said "If that is what you want, prepare to die." They probably didn't say those exact words to each other, please don't quote me on that! Sir Calogrenant and a local village hermit, try to to intervene, more fool them...Lionel kills them both. There is nothing stopping Lionel now from murdering his brother..apart from a lightening fork that is sent down from the heavens -- which I don't think actually kills him, because Lionel pops up again later on in the story -- unless Bors had two brothers called Lionel? I am assuming that he did not.
During the Lancelot and Guinevere scandle, which rocked the court of Camelot, Bors helps Lancelot rescue the Queen. He sides with Lancelot and follows him into exile from court. Eventually Bors gains the lands of Claudas. Sir Gawain writes to Lancelot asking for his help against Mordred. Lancelot does not go, but Bors and Lionel do. Lionel dies in the skirmishes immediately after the Battle of Camlann. Bors avenges him and so the story ends.

My favourite portrayal of Bors?

I think my favourite portray of Bors was played by Ray Winston in the 2004 film, King Arthur - the film is worth watching just for the banter between Bors and Lancelot ( Ioan Gruffudd ). And I also love the portrayal of the Saxons, especially Cerdic and Cynric -- I promise you, you will definitely be meeting those two in The Du Lac Chronicles, did I tell you it is out early 2016?! 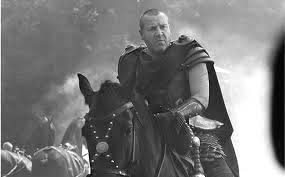