Merlin - The Wizard of Alderley Edge

There are many places across Britain that claim to have links to King Arthur and his Knights. Can you remember when I spoke of Cadbury Castle and how hidden under the hill was a secret cave, with a pair of iron gates at its entrance? It turns out Cadbury is not the only place where such a tale is told.

There is a small village in Cheshire, with a population of just over 4,000, that boasts the same sort of story. They tell a tale of a farmer, a white horse, a sorcerer and a mysterious cave hidden in a hill.

Once there was a farmer from Mobberley who was on his way to the market at Macclesfield, in the hope of selling his white mare. As he made his way around the Edge he saw an old man, dressed in flowing grey garments. The old man approached him and offered him a fair price for the horse. The farmer refused, he wanted more than this mystery man was offering him and he thought he would get a better price at the market. The old man wished him luck and told him that he would wait for his return from the market and, if he still had the horse, then maybe the farmer would be willing to sell the animal to him then. 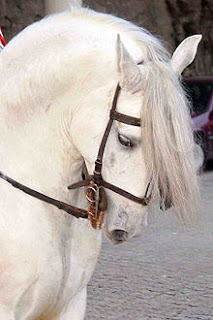 The horse did not sell and, with grave disappointment, the farmer began to make his way home, hoping that the old man, dressed in grey, would be waiting for him and still willing to buy the horse at the price he had offered earlier.

Thankfully the old man was there and the farmer sold the horse to him, which cheered him somewhat after his dismal disappointment at the market. The old man did not have any money on him, but he assured the farmer that his home was not very far away. The farmer was happy to follow the old man back to his house.

As they approached an area, near a place that was known locally as Stormy Point, the old man produced a wand and started to mutter under his breath. The farmer, was understandably alarmed, and wished now that he had refused the old mans offer, but he had come this far and he needed the money. The view from Stormy Point over to the Pennines

The rocks opened up in front of him. Fearfully he looked inside and saw a pair of majestic iron gates. The old man had started to chant in the language known only to those who practiced magic, and the gates opened. Terrified the farmer fell to his knees and begged the old man not to harm him, to let him go, he wouldn't tell anyone. The sorcerer, which he clearly was, smiled reassuringly and promised that he meant him no harm and all he wanted to do was pay him for the horse.

Not knowing what to do for the best - for this sorcerer had great power and he did not want to offend him - the farmer decided to lead the horse into the cave. Up ahead of him he saw countless men and white horse, all fast asleep. He watched with his mouth a gasp as the sorcerer went to an old chest and pulled out a bag of coins, which he gave to the farmer as payment for the horse.

The farmer asked fearfully who these people were. The sorcerer told him that this was a sleeping army who would one day rise again, should England be in peril. They would do him no harm, he had nothing to fear from them.

The sorcerer then abruptly told the farmer to leave, which he gratefully did. The iron gates slammed shut behind him and when he turned around to look at the gates one last time, there was nothing to see. The land in front of him looked as it always had.

Not daring to linger, the farmer walked swiftly away. When he returned home he told everybody he knew about the strange encounter and the next day his friends traveled with him back to the rocks, but they could see no cave, everything looked as it always did.

From the description of the men asleep and the sorcerer's words, we can assume it is Arthur and his knights and the sorcerer, Merlin. I there any truth in the story? -- I think that is probably up to you to decide, but I do wonder what the farmer's friends thought of him when he told the tale?