Sir Galahad - and why he annoys me!

The son of Lancelot du Lac, Sir Galahad, was the greatest of knights who ever sat around Arthur's fine Round Table. So how come no one had heard of him until the 13th Century?

George Frederick Watts (1817 - 1904)
Galahad first appears in Lancelot-Grail. He became such a popular knight that from here-on-in, we hear about him all the time. He is everything his father was, but then more. The more I read about him, the more I am convinced that he should really have entered the church and stayed well away from Arthur and his knights. If you don't know his story, then read on and you will see what I mean.

Lancelot mistakes Elaine, the daughter of the Fisher King, as Guinevere, and he begets her with child. More magic is involved here, I fear -- unless Lancelot was like Prince Charming who, as I should imagine you all know, failed to recognize the love of his life and had to identify her by placing a glass slipper on her foot! They say love is blind and all that, but...really?

Elaine has a son. According to Prose Lancelot, the child is given his father's original name of Galahad - of course. Galahad has a noble ancestry on his mothers side at least, he descends from the brother of Joseph of Aramethia. I guessed he lucked out with his father, who could not tell one woman from the next, (I know, I know, you get the picture, I am just not impressed with Lancelot's excuses).

Merlin foresees Galahad's future in a vision. The son of du Lac is destined to find the Holy Grail.

Galahad grows up and becomes a man.

Lancelot, knights him and takes him to Camelot. Here he sits in the chair that no one should sit on except for the chosen Grail seeker. Luckily for Galahad, he is that man, otherwise he would have died there and then and what a shame that would have been.

With wide eyes, King Arthur asks the young knight to accompany him.  The rest of the knights look on, a few nudge Lancelot knowingly, but Lancelot has no idea what they know, being as he cannot even tell one woman from another, (get over it...he made a mistake, move on). Arthur leads him to a river where there is a sword in a stone. The inscription on the sword reads;


“Never shall man take me hence but only he by whose side I ought to hang; and he shall be the best knight of the world.”

Before you start shouting at the screen saying it is Arthur that pulls a sword from the stone - hold fire.  Galahad pulls the sword free and Arthur declares that Galahad is the best knight to ever live, he could hardly say "...Oh, it is you who is the rightful king, my mistake, here is the crown," can he?

The quest for the Grail begins.

Galahad prefers to work alone, (well, that is what they say anyway - personally I don't think he was that popular in court). He rescue many maidens in distress during his quest, as well as Percival who finds himself out numbered 20 to 1 -- to this day, Percival states that he had everything in hand and he didn't really need rescuing.

Eventually Galahad is reunited with Bors and Percival. Percival's sister knows where the Grail ship is - she could have said something before, I don't really understand why she didn't  - Anyway, she dies and Bors vows to take her body home, (any excuse to get away from Galahad), which leaves just Percival and Galahad.

The two intrepid knights end up at the court of King Pelles (the Fisher King) and Galahad mends a sword - just by holding it - and sees a life changing vision. He now knows where the Grail is - it is on the ship - and he also knows what he has to do with it.

Unfortunately Camelot is far to unsavory for the Grail to go to??!  Instead, the two knights have to sail to the Holy City of Sarras.

Galahad has a "now I have seen it all" moment, and request that he be allowed to die when he chooses. The request is granted. After meeting with Joseph of Arimethea, he chooses to die - it is said because the experience was glorious - The angels come and lift Galahad up to the heavens. As for the Grail...it has never been seen on earth again.

"The fact that Sir Galahad had always acted so damned self-righteous that his Grail-hunting companions had wearied of his holier-than-thou ways probably had nothing whatever to do with his demise."
Kim Iverson Headlee  King Arthur's Sister in Washington Court 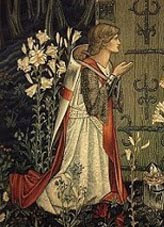 The story of Sir Galahad was to inspire many future poets and writers, and his piety, chastity and purity almost becomes, how can I say it, difficult to read about it. In the blog where I talked about Lancelot, I mentioned that if he had not had the affair with Guinevere he would make me feel slightly ill - because he would have been too good to be true, and I think in the case of Galahad, this statement really does apply. Of all the knights, he is the one that really annoys me. Which probably says more about me than him. Maybe I need to work on that. But listen...

"I never felt the kiss of love,
Nor maiden's hand in mine.”
Lord Tennyson
"the best of Arthour's Knights,
Who should achieve the quest of the Sangrael
Which only they shall see whose lives are pure.
No bravery is such a virtue as the Graele may gain.”
Thomas de Beverly

Do you see what I mean, he is just to good and too nice. At least Thomas Berger's in Arthur Rex portrays him differently. In Arthur Rex, Galahad does not die after securing the safety of the Holy Grail, instead he is portrayed in a satirical light. Galahad sleeps through most of a battle.. he decides to join in...kills Lancelot by mistake... and then is killed himself. No honorable death there, then.

In Monty Python and the Holy Grail, Galahad's chastity is put to the test when he finds himself at the mercy of a castle full of sexually frustrated nuns!

So there we have it, Galahad, my least favorite of Arthur's knight's.

Email ThisBlogThis!Share to TwitterShare to FacebookShare to Pinterest
Labels: Arthur Pendragon. King Arthur, Knights of the Round Table, Myths and Legends., Sir Galahad