So, lets for a minute, forget about Nennius, Gildas, and my hunt for the real Arthur, and instead look at the stories.

Geoffrey of Monmouth really paved the way when it came to the stories of Arthur, but it would be the work of Malory's Le Morte D'Arthur, which would come to influence the 'history' of the Once and Future King. 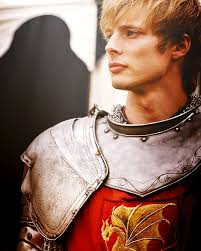 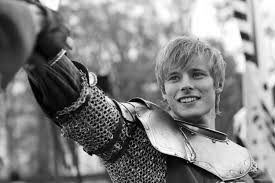 
See if you recognise any of these themes.

King Uther Pendragon holds court, and there he meets Igrain, the wife of Gorlois, Duke of Cornwall. Uther is driven almost out of his mind with lust for Igrain. He cannot help but make his attraction known. But Igrain loves her husband and tells him of Uther's pursuit. Gorlois whisks his wife away from court and they head back home to the safety of Tintagle Castle.

So great is Uther's lust that he follows her home, and while Gorlois is out fighting in a noble battle, Uther asks the great sorcerer, Merlin, to disguise him as Gorlois. Thinking Uther is Gorlois, Igrain makes love to him. That very night, Gorlois dies.

After this there is a great deal of confusion as to what happened next. Did Igrain have two daughters by Gorlois and a son by Uther, or were all her children Uthers? Did she marry Uther? Did she die? -- I am guessing at some point she died, because that tends to happen, but no one seems to know when.

We need to look at Robert de Boron and Thomas Malory's work to find out what happened next.

Arthur is giving to Sir Ector to be raised in secret.

In the meantime, Uther dies and as there is seemingly no heir to take his place, Merlin decides to place a sword in a stone - saying that whoever can draw the sword out of the stone is the rightful king. 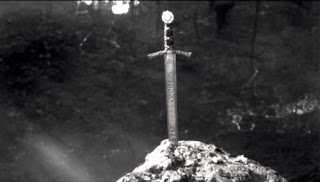 Many try. No one succeeds. Except for Sir Ector ward, Arthur.

Arthur is crowned king. Hurrah! But not everyone is happy about it. Merlin takes Arthur to Avalon, here he meets with the Lady of the Lake who gives Arthur his magic sword, Excalibur. There is a rebellion of the eleven kingdoms, which Arthur brutally puts down. He is the King and he will have respect.

Arthur meets and falls in love with Guinevere. Her father gives Arthur a magnificent Round Table as part of his daughter's dowery. There is no head to a round table, so all those who sit around it are equal. And so begins a memorable reign. It is all going splendidly well, until his wife falls in love with one of his knights.

Lancelot and Guinevere keep their affair a secret. But as with all secrets, at some point the truth will out.

Guinevere begs Lancelot to flee the castle, fearing for his life. He is reluctant to leave her, but he sees no other option. He leaves, but then he hears the shocking news that Arthur has sentenced Guinevere to death for High Treason. Lancelot cannot leave her to such a fate, so he embarks on a bold rescue, in which he is successful. Lancelot takes Guinevere to the relatively safety of his own kingdom in Brittany.

Arthur cannot allow such an insult to go unpunished. He crosses the channel to Brittany and lays siege to Lancelot's castle. There are several version as to what happens next...did Lancelot make peace with Arthur? Did Guinevere return to her husband? Was there a bloody battle?

Meanwhile, back in Britain, Mordred, whom Arthur had left in charge of the kingdom, comes to the conclusion that he actually quite likes having all this power and he could easily do what Arthur does - no problem whatsoever. He rebells against Arthur and claims the throne of Camelot for himself. Enraged, Arthur leaves Brittany and heads home.

There is a vicious battle on Salisbury Plain - The Battle of Camlann - in which Arthur slays Mordred. Unfortunately, Arthur is also gravely wounded. He needs to journey to Avalon where the magic of the waters will heal him. He is placed in a barge - the quickest way to get to Avalon is by boat. But, Arthur knows he will not make it. He commands that his sword be thrown back into the lake. He dies...well, maybe he died, for his death is surrounded in mystery.