Today I have the pleasure of welcoming fellow author, Larry Shackelford, onto my blog. 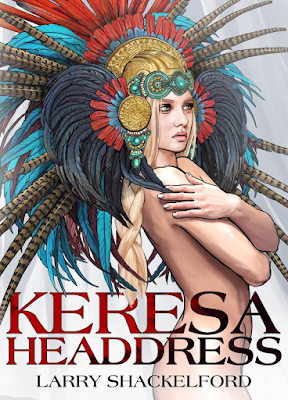 The “The Keresa Headdress” was inspired by my lifelong interest in archaeological science and American Indian cultural traditions.  During my 25-year federal law enforcement career, I also investigated a number of criminal cases involving site vandalism and artifact theft on America’s public lands.  During the latter part of my career, I served as the Utah Bureau of Land Management’s (BLM) Special Agent in Charge. Approximately 70% of Utah’s landscapes and natural resources are managed by the federal government, and there are literally thousands of cultural sites still hidden throughout millions of acres of public land. Thankfully, the United States has similar laws to England (such as the Treasure Act of 1996) that protect historical treasures.  Specifically, the Archeological Resource Protection Act (ARPA), and the Native American Graves Protection and Repatriation Act (NAGPRA) are two federal laws that effectively detour illegal theft and degradation of cultural sites.

My varied and often surreal on-the-job experiences as an "artifact cop" in Utah definitely helped inform this unique and engaging narrative. I developed a reverent respect and appreciation for the abundance of pristine, undiscovered archaeological sites that harbored the rich histories of Utah’s indigenous cultures. Utah’s Redrock country was home to Ancestral Puebloan groups (Anasazi) that flourished in the southwest for thousands of years.  To the north, the Fremont cultures inhabited the Great Basin region. Unfortunately, some people’s idea of “outdoor recreation” is desecrating these prehistoric burial sites and stealing sacred grave goods for personal profit.  The problem is not confined to rural Utah: artifact looting is systemic throughout the American west. Artifacts such as stone projectile points, beaded moccasins, ghost dancer shirts, and ceremonial headdresses are looted and sold for literally thousands of dollars on the black market.  The looters’ selfish actions rob all Americans from our shared natural and cultural heritage—which is priceless. Part of my motivation for writing this novel was to bring national attention and renew discussion pertaining to this important legal and moral issue.


My goal was to sensitively and accurately portray modern scientific and American Indian perspectives. A new challenge emerged when I added another layer to the story: the complex and secretive modern polygamous community in southern Utah.  It is difficult for others living around the world to believe that polygamy still is practiced by thousands of people right here in America. These communities have all the modern day amenities and technologies we enjoy, except they still carry on religious traditions and with customs that were established in the seventeenth century.  This includes women wearing full length prairie-style dresses lined with lace borders, and bouffant hair styles that symbolize “sister-wife” status. One of the main characters is a schoolteacher named Ruth who lives in a tight-knit polygamous community in Hilldale, Utah. Even though Ruth’s character is fictitious, I wanted her voice to be authentic and connect with readers. I wanted to show audiences what she was thinking, and reveal her humanity and many dimensions.  How would a woman like Ruth think or feel about certain situations we in larger society take for granted? How would someone like Ruth, who’s never experienced personal freedom, respond to these bizarre, life-changing circumstances? The events that unfold in The Keresa Headdress ultimately redefine all of the key characters in unique ways. This woman was able to leave a closed community and fulfill a dream of becoming in individual, pursuing an education, and meeting the man of her dreams. I also wanted her soul mate, Lee, to have a non-traditional background to enhance their relationship.


I believe one of the most important aspects of writing historical fiction is to create an “original” plot that touches multiple genres, along with a memorable cadre of sympathetic characters. I wanted readers to see a different side of law enforcement and the “human” challenges that come with different types of investigations. I also believe that a great romance story always brings two lonely people together who bond in ways that surprise and fulfill them both. I confess I’m just another hopeless romantic, and a story like The Keresa Headdress keeps my hopes and dreams alive.

Larry was raised in southwest Missouri where he received his college degree, but he received his education after he graduated and began working in a maximum-security federal prison. After spending two years behind bars, he continued his law enforcement career as a criminal investigator, residing and working in eight states and two foreign countries. Larry retired from law enforcement after twenty-five years of service and resides in Salt Lake City with his wife and cat
Posted by Mary Anne Yarde at 07:27

Email ThisBlogThis!Share to TwitterShare to FacebookShare to Pinterest
Labels: #amreading