And did those feet in ancient time
Walk upon England’s mountains green?
And was the holy Lamb of God
On England’s pleasant pastures seen?
And did the countenance divine
Shine forth upon our clouded hills?
And was Jerusalem builded here
Among those dark satanic mills?
Jerusalem 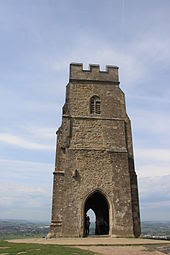 I love driving down to Wells from the Mendip Hills. There is a rather bendy and steep hill that has trees and high stone walls on both sides of the road. But then you go around a corner and the scenery opens up in front of you. I particularly like driving down this road early in the morning, because the Tor looks like it is rising from the mist and for that moment, it is easy to believe that Glastonbury was Avalon. This "mist" even has a name - Fata Morgana - the Italina name for this type of mirage. It is said that the Arthurian sorceress Morgen le Frey created fairy castle and false lands in the air, to lure sailors to their deaths.

Many people feel drawn to the Tor and I am one of them. I have spent many an evening up there in my youth, with my friends. It was usually pretty cold, but it was always worth it for the sunset.

I have to be honest, I have avoided blogging about the Tor and I don't really know why that is. I guess it's just one of my special places and sometimes like books, if you talk about them, dissect them, then all you are left with is words - the magic is gone. I do not want to lose the magic of the Tor. But that is a poor excuse! The Tor has a fascinating history and it needs to be shared. 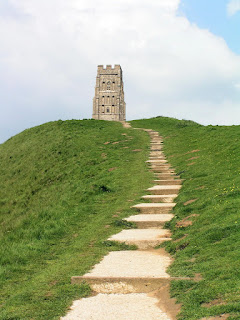 I am not going to go into masses of detail about how high it is or why no one seems to know why the Tor has seven deep, roughly symmetrical terraces. If you have never climbed it, lets just say, your going to be glad when your reach the top. There is a great many steps and boy, is it steep - The picture does not do it justice as to how steep it is - Although I did once see a woman jogger who ran up and down those steps twice - without stopping. I can remember thinking she must be completely mad - I always have to stop half-way and collapse on the grass in a heap! She was obviously just super fit where as I am....

The Tor hides many secrets, of that I am certain. But one thing is for sure, this hill has been drawing people towards it for a very long time. Archaeologists have found Neolithic flint tools at the top of the Tor - and there wasn't even steps up the hill back then - they must have been really, really fit!

Philip Rahtz and his team excavated the site 1964 - 1966 and found evidence of occupation in the 5th to 7th Centuries.

There were at least four buildings on the summit of the Tor during the late Saxon and early medieval period.

The 11th and 12th Century saw the building of a timber church, which was dedicated to St Michael. Monk cells have also been identified there. Although, I can not understand why anyone would want to live on top of the Tor because when that wind blows...your teeth are definitely going to chatter. Believe me - I know.

On the 11th September 1275, there was an large earthquake that destroyed the church. So they built another one in the 14th Century. This church survived until Henry VIII had his own earthquake which saw the destruction of many beautiful monasteries. Richard Whiting, the last Abbot of Glastonbury Abbey was rather brutally executed on top of the Tor along with two of his monks. It always makes me feel incredibly sad when I think of the Abbot and his monks. The Abbot was held in very high esteem. He was a caring spiritual leader. Not only did they all die a traitors death, but from the top of the Tor they could have seen their once beautiful Abbey lying in ruins. The only thing left of the church on top of the Tor was the tower.

Richard Colt Hoarse bought the Tor in 1786 and in 1804 he funded the repair of the tower. In the 20th century the Tor was sold and it became a memorial to Thomas Jex-Blake, the former Dean of Wells. In 1933 the National Trust took control of the Tor and they have looked after her ever since. 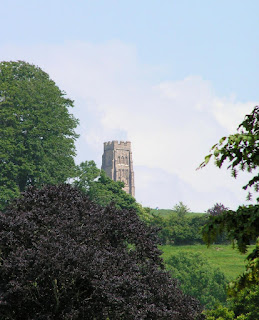 The 19th Century saw a resurgence of interest in Celtic mythology. It was thought the Tor was the entrance to Avalon - the land of the fairies.

I have not explained all the myths and folklore associated with the Tor. I am sure you have somewhere better you really should be.

But it is a most magical place. It is easy to believe in fairies and Goddesses, King and legends, when you are on top of it.

Whether Glastonbury is Avalon, no one knows. But think of this, since the beginning people have been drawn to this place and this hill. I have suspicion that they always will be. Now tell me that isn't magic...