Threaten To Undo Us #BookReview @RoseSeilerScott

"...We will exact a brutal revenge for all they have done..."
Soviet Marshal Georgi Zhukov
About the story. 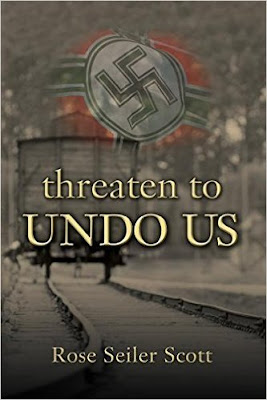 As Hitler's Third Reich crumbles and Stalin's Army advances, German civilians in the Eastern territories are forced to flee for their lives.

Leaving her dying mother, Liesel and her four young children hope they can make it from their home in Poland across the Oder River to safety. But all that awaits them is terror and uncertainty in a brutal new regime that threatens to tear Liesel's family apart.

With her husband a prisoner of war in Russia and her children enslaved, Liesel's desire for hearth and home is thwarted by opposing political forces, leaving her to wonder if they will ever be a family again.

What did I think of the story?

What a stunning portrayal of life as a German living in Poland before, during, and after WW2. This story takes you from the tranquillity of living an ordinary life on a farm, to the horrors of the Soviet War Camps. This book truly blew me away.

The historical detail in this story is amazing -- In a past life, I tutored Modern History, so I know that Scott knows her subject well -- The story is well-crafted, epic and spell-binding.

The main protagonist, Liesel, is just an ordinary woman, who wants to be a good wife and a mother, but war changes everything. Her husband has to go to war and she is left alone on the farm with her aged parents and her young children. Her community is torn apart and things will never be the same again.

When the Soviets come, to free Poland from German rule, Liesel's struggle changes from trying to find enough food for her children to eat, to the simple task of trying to keep her children with her.

She is forcibly separated from her children -- which would be any mother’s worse nightmare -- but that is only the beginning of her ordeal. She suffers unimaginable horrors, however she has a quiet strength and a courage that could match any one of the Soviet Generals. She holds on to one thought -- she will reunite her family, no matter how long it takes. And when everything else falls apart, she clings to her faith.

There are many wonderful novels out there about the hardships faced during World War 2, but rarely is the story told from the German perspective -- this is the first time that I have a read a story about a German family in Poland. I thought this book was very refreshing and Scott has written a very believable story that delicately shows the suffering from both sides.

Scott reminds her readers that many ordinary Germans did not want to fight their neighbours -- they did not want to go to war -- but they had no choice. The fear of the German Regime and then the Russian one, was very real in the telling.

Scott has done a marvellous job putting flesh to her characters. She is, without a doubt, a truly wonderful writer. She made me care for Liesel and her family. As a reader I grieved with them. I felt their joy as well as their heartache. The plot was gripping to say the least - I did not want to put this book down.

I would highly recommend this novel to anyone interested in this period of history. But be warned, this story will stay with you for a very long time afterwards.


Where can I buy the book? As a story from the German side of the family unfolded over the years, Rose set out to make it into a novel. During the process she has realized that not only is truth stranger than fiction, but truth can also be told through fiction. THREATEN TO UNDO US (MAY 2015) is the result of years of research, revealing a history that few in the Western world are familiar with.

Rose won a "His imprint" award for a short story in 2013, was short-listed for a Word Guild Award in 2012 and has been published in "Light Magazine." Two inspirational non-fiction pieces will appear in the HOT APPLE WITH CINNAMON compilation in Fall 2015.

Since fifth grade, Rose has known she liked to write, but her career path has taken several turns including bookkeeping, piano teaching and mother of four. She is a longtime resident of Surrey, BC. Her eclectic reading tastes include historical fiction, biographies, memoir, literary and inspirational.