If you are interested in the Roman era and enjoy reading historical fiction based around this time, then you may have stumbled upon The Sunday Times bestselling author, Ben Kane. I was lucky enough to get my hands on an ARC of Kane’s latest book, Hunting the Eagles.
Hunting the Eagles is the stunning sequel to Eagles at War. 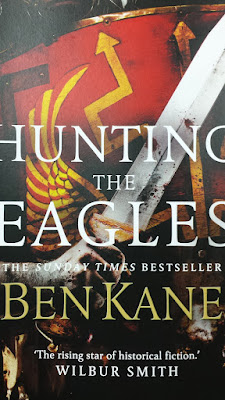 It is a terrible thing to lose one Eagle, let alone three. And to see 15,000 loyal soldiers of Rome butchered before your eyes is not something you are ever going to forgive or forget.

Five years have past since the massacre in the wilds of Germania. Those who survived the carnage, now have to live with what they had witnessed, as well as the shame of losing their precious Eagles.

Centurion Tullas is one such survivor. His only consolation is that he saved as many lives as he could. But, instead of praise for his selfless courage, he finds himself demoted. There are two things he wants now…revenge on Chieftain Arminius – whose army slaughtered the three legions - and his old regiments Eagle.

Rome has had enough time to lick her wounds, she wants her Eagles back. It is time for revenge. It is time for war. The orders are clear, kill everyone and recover the Eagles. No mercy. But Arminius is not the type of man who will sit back and let such atrocities occur in his own kingdom. He slayed them once, can he do so again?
What did I think of the story?

It is difficult to write this level of fiction without it sounding like a history lesson, or without losing your reader to facts, figures and descriptions that they cannot hope to understand unless they have a degree in the subject. Ben Kane immerses you in the Ancient World, he doesn’t describe it – he does something extraordinary – he brings it back to life. He draws his readers into the thick of the action. Kane doesn’t let you get lost in the history, or leave you floundering around like a fish out of water. It is like having your own personal tour guide to the past. With Kane, I knew I was in safe hands.

Strangely, I did not feel that there was any one antagonist in this story – I was moved by the plight of Centurion Tullus and his legionaries, as well as his enemy, Chieftain Arminius. I cannot think of many books where my loyalty has been so split. Both characters had flesh on them; both had their own reasons to hate the other. The portrayal of these characters was sublime. Totally believable.
The battle scenes were vivid and were very real in the telling. It was like being there, without the threat of being brutally maimed or killed, of course!

Hunting the Eagles is part of a series, but not once did I feel that I had missed out on anything by not reading the prequel. Although, saying that, Eagles at War is now definitely on my ‘to be read’ list.

Where can I buy (Pre-order) the book? 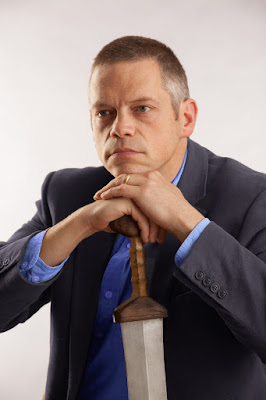 Kenya born, Irish by blood and UK resident, Ben Kane’s passion for history has taken him to more than 60 countries, and all 7 continents. During his travels and subsequent research, including walking hundreds of miles in complete Roman military gear, he has learned much about the Romans and the way they lived. Seven of his nine novels have been Sunday Times top ten bestsellers, and his books are published in twelve languages. He lives in Somerset with his wife and children, where he writes full time.
Ben Kane was born in Kenya and raised there and in Ireland. He studied veterinary medicine at University College Dublin, but after that he travelled the world extensively, indulging his passion for ancient history. Having visited more than 60 countries and all 7 continents, he now lives in North Somerset with his wife and family.
He has been a full time writer since late 2008, and has loved almost every moment of that time. Apart from all things Roman, Ben loves military history of any type. Basically, if a book features men with guns and/or swords, he’ll read it. Other interests include rugby, walking, and beer. If an afternoon can include all three, it’s bound to be perfect.

Ben is also lucky enough to be the Treasurer of the newly founded Historical Writers’ Association.