Once Upon A Regency - Blog Tour 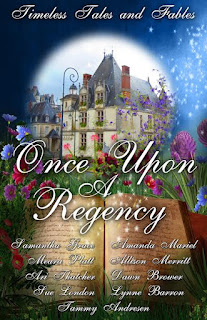 Resisting Romeo by Samantha Grace
There was much excitement yesterday at the Clarendon Hotel when a French actress interrupted a tête-à-tête between two of London’s most eligible bachelors and quietly exchanged words with them. Mr. Russell Hawke was quick to escort her from the premises, making witnesses wish they had remembered to bring their ear trumpets to tea.

Enchanted by the Earl by Amanda Mariel
Lowly seamstress Rose Woodcourt shocked society by capturing Hunter Thorne the Earl of Aubry’s heart after he banished her personal wolf.

Wish Upon A Kiss by Meara Platt
Young ladies from the best families are clamoring to become May Princesses now that Winifred Kingsley, a young lady of little consequence, caught the eye -and captured the heart - of Ardaric, fourth Duke of Blantyre when he spotted her dancing about a maypole in her shockingly scanty costume.

A Duke Worth His Salt by Allison Merritt
Lady Eleanor Mortin managed to snag the reclusive Duke of Greenebuck, who is not only writing fairy tale endings for his novels these days, but also living one with his new bride.

Masquerading as a Miss by Ari Thatcher
Just weeks after he was reported as drowned in that shipwreck, Lord Spalding appeared with a mysterious young woman who claimed to not know who her relations were. I daresay she has none and is eager to secure a match with Spalding, who as you know will one day inherit the earldom.

Searching for my Rogue by Dawn Brower
Upstart American, Alys Dewitt snared the Duke of Weston, one of England's most sought after bachelors proving love is descending us all into madness.

The Enchanted Cave by Sue London
Irish lass Maeve O’Malley landed a blow to the hearts of innumerable smitten girls when she tangled Mr. Galen Mornay into knots of the nuptial variety.

Taming Beauty by Lynne Barron
Not only did the scandalous Lilith Aberdeen manage to bring the beastliest of barons up to scratch, but she did so only days before Lord Malleville was to marry her sister.

Stealing a Lady's Heart by Tammy Andresen
Lady Charlotte Beaumont, first cousin to the Prince Regent, was seen gallivanting through Scotland with four eligible bachelors and no chaperone. This shocking lack of decorum is not the first from the lady but most certainly the worst. One simply must wonder if nuptials are soon to follow. Join us on a Regency adventure of love and romance in the limited edition box set Once Upon A Regency: Timeless Tales And Fables! Set includes 9 never told before stories. 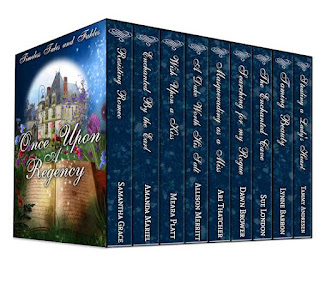 French actress and aspiring playwright Claudine Bellerose recently closed the curtains on a bad romance and has returned to center stage at a small London playhouse where she is about to premiere her first production. Enter Russell Hawke, the new owner of the Drayton Theatre, to deliver disturbing news. If Claudine’s play doesn’t turn a profit, he’ll have no choice except to close the theatre. To further complicate matters, her leading man just suffered an accident and can’t perform. Russell is confident he is capable of stepping in to star opposite the lovely Claudine, but she quickly realizes his horrible acting is threatening to turn her romantic play into a farce. Her only option is to tutor him in his role, and hope she can resist the charms of this handsome Romeo. 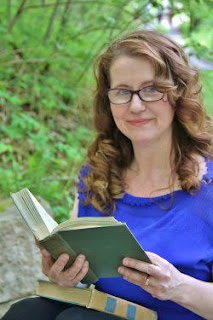 RITA-nominated historical romance author, Samantha Grace, discovered the appeal of a great love story at the age of four, thanks to Disney’s “Robin Hood”. She didn’t care that Robin Hood and Maid Marian were cartoon animals. It was her first happily-ever-after experience, and she didn’t want the warm fuzzies to end. Now that Samantha is grown, she enjoys creating her own happy-endings for characters that spring from her imagination. Publisher’s Weekly describes her stories as “fresh and romantic” with subtle humor and charm. Samantha describes romance writing as the best job ever. Part-time medical social worker, moonlighting author, and Pilates nut, she enjoys a happy and hectic life with her real life hero and two kids in the Midwest.

Where can I buy this fabulous BOX SET?