The last time I talked of Guinevere, I spoke of her Welsh connections. If you missed it, you can read the post here. Today, I am going to look at the rest of her story. If you are a regular reader of my blog then some of what I am going to say may be familiar - Guinevere does tend to pop up when one talks about Arthur...or Lancelot, for that matter.

Guinevere was the daughter of King Leodegrance. Leodegrance was a loyal knight when Uther Pendragon sat on the throne and he was entrusted with the precious Round Table after Uther's death. He is sometimes referred to as The Keeper of the Table.

When Arthur took the throne, he did not have the support of all the kingdoms and he spent the early part of his reign fighting to prove his worth. Leodegrance was an ally and Arthur came to his aid when Rience attacked -- Rience wanted to control all 12 kingdoms of Britain, Arthur's Kingdom was the 12th. Once Arthur and his men had driven Rience from Leodegrance's kingdom, Leodegrance introduced Arthur to his daughter, Guinevere.

Arthur and Guinevere fall instantly in love and they married. Arthur couldn't be happier - all he needed now was for the rest of the kingdoms to recognise him, as High King and life would be perfect.

Guinevere is abducted by the evil Meleagant. Sir Gawain volunteers to rescue her. But he isn’t the only man intent on rescuing her.

Lancelot and Guinevere by Herbert James Draper (c.1890)
Guinevere and Lancelot cannot help themselves. They find themselves playing a very dangerous game in the name of love.

When Arthur finds out of his wife's unfaithfulness and Lancelot’s disloyalty he accuses both his wife and his knight of High Treason. Guinevere begs Lancelot to leave before he is arrested. On her persistent urging he does. Arthur, in his rage and grief, sentences Guinevere to be burned at the stake as a traitor - what else can he do?

As angry as he is with Lancelot, Sir Gawain cannot bring himself to watch his Queen die, nor can he kill one of his bestfriends. He refuses to attend the execution.

Lancelot does rescue the Queen, but in doing so he kills Gawain's two brothers. Gawain will never forgive Lancelot for this - he wants revenge. 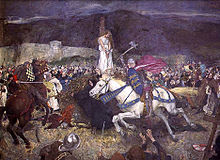 The Rescue of Guinevere by William Hatherell

Meanwhile Lancelot takes his lover to safety, but Guinevere is overcome with guilt and, despite everything that has happened, she loves her husband. She returns to Arthur. Lancelot reluctantly lets her go. There is nothing left for him here now, she has made her choice. He goes home to Brittany.

However, Lancelot has to pay for what he had done. Arthur will not let the insult go unpunished. Arthur takes his knights and his army across the water. He leaves Britain and Guinevere in, what he thinks, are the safe hands of Mordred.

But while the cats away the mice will play….Mordred has an evil scheme to take over Arthur’s kingdom and marry his Queen. Guinevere finds out about Mordred's plot and flees, seeking sanctuary first at The Tower of London (because that was built then??? Correct me if I am wrong, but I was under the impression that was built after the Norman occupation) and then at a convent.

Meanwhile, back in Brittany, Gawain, in a fit of rage, kills Lancelot's brothers in battle. He has had his revenge. But it didn’t taste as sweet as he had hoped it would. 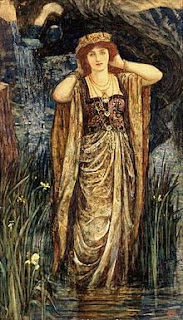 News travels from Britain and Arthur learns of Mordred disloyalty. A truce is called. Lancelot tells Arthur that he will travel with him back to Britain and despite what Arthur thinks of him, his loyalty to Camelot has never wavered. Arthur refuses Lancelot’s request. But the battle between the two men is over. Arthur has to return to Camelot.
Arthur's army and Mordred's, meet at Camlann. Arthur kills Mordred, but he himself is gravely wounded. He is taken to the Isle of Avalon and no one knows what happened after that.

Guinevere meets Lancelot one more time. They say their farewells and she joins a convent while he joins a monastery.

That is one version of events anyway!